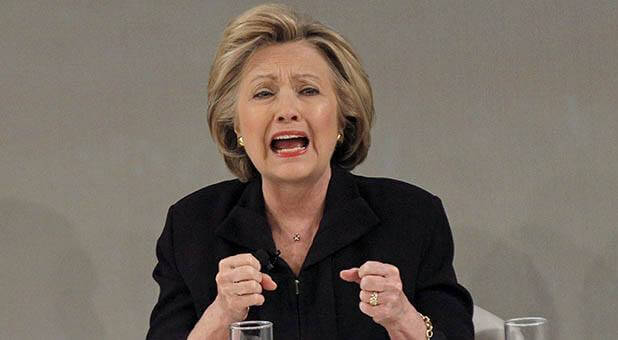 Priyanka Choudhury
Hillary Clinton has predicted, President Donald Trump may ‘lead to widespread firings [in the Trump administration] after the midterm elections in November’. Anti-Trump media in the US are trying to promote the wild prediction of Clinton as ‘correct’. Controversies started when an anonymous op-ed appeared in the New York Times and some critics of Donald Trump were over enthusiastic in anticipating the op-ed were written by a senior official [Trump’s adviser Jared Kushner]. Later this allegation was proved to be fake.
In the show, Clinton told Maddow, “The people around him [Trump] have to be our first line of defense against him doing something that will have serious repercussions.” “What I worry about, Rachel is that after this election this president’s going to wholesale fire people. That’s my prediction for tonight. And if we don’t have one or both houses of Congress in place, he will be even more uncontrollable and unaccountable. He will fire people in the White House. He will fire people in his administration who he thinks are crossing him, questioning him, undermining him.”
The Rachel Maddow Show airs weeknights at 9 pm [US local time], on MSNBC.
Ever since her defeat in the 2016-Presidential election, Hillary Clinton has become violently inclined in somehow getting President Trump ousted. She even had hinted earlier, for attaining this goal, she is ready doing ‘anything’ and ‘everything’. Hillary has already got Barack Obama onboard in the anti-Trump madness. Despite the fact that American economy and jobs are doing great during Donald Trump’s presidency, failed Hillary-Obama nexus are making every possible bid in fooling the US voters with the clear agenda of getting majority in the Senate and the Congress during the November midterm polls. Most of the pro-Hillary enthusiasts are seeing the possibility of getting Donald Trump impeached, once Democrats get majority in the Senate and the Congress, while pro-Trump quarters fear a tremendous slow pace or even pause in President Trump’s various initiatives in favor of the country due to continuous opposition from the Democrats. They are seeing Israel as the biggest looser should Trump put on trouble.
According to experts, impeachment of Donald Trump might be a ‘mission impossible’ as the United States constitution has several specific reasons for such impeachment bids and President Trump’s actions do not fall under any of such preconditions.
While many of the surveys show Donald Trump winning a second consecutive term during the 2020 presidential election, Hillary Clinton reportedly has become ambitious in getting nomination from her party in running the election. But party insiders are considering Hillary as the most unpopular politician in the country. They think anti-Trump sentiment does not bring any good news for Hillary Clinton as she already had been rejected by the voters. Moreover, the high-profile scandal centering Clinton’s emails and receiving tons of money from the Arab nations for the Clinton Foundation are the major obstacle for Hillary in getting nomination for the 2020 presidential election.
A source within the inner circle of Clinton has hinted that the former first lady may even leave the party should she not get the nomination and join the election as an independent candidate.
As part of her ambition of running the 2020 presidential election, Hillary has been bringing individuals like Barney Sanders into her bloc.
The Russian interference allegation:
Jake Sullivan, former senior adviser to Hillary Clinton’s campaign said, Hillary Clinton’s campaign was blindsided by the sophistication and breadth of Russia’s social media efforts to subvert her 2016 presidential bid and promote Donald Trump’s candidacy.
He said, “We didn’t come to understand this was even going on until very late in the day, and it wasn’t until the closing days of the election that we started to realize that maybe something was happening,” Sullivan told Grant Burningham, host of the Yahoo News podcast “Bots & Ballots.” “And it really wasn’t until after the election that we came to understand the full scope and scale of the Russian effort and how the social media aspect of it was amplifying and driving the hacked and leaked documents aspect of it.”
“It really wasn’t until the documents started coming out around the Democratic National Convention in July that we realized there was a different game going on,” Sullivan said. “There was something else afoot.”
Priyanka Choudhury is the assistant editor of Blitz.