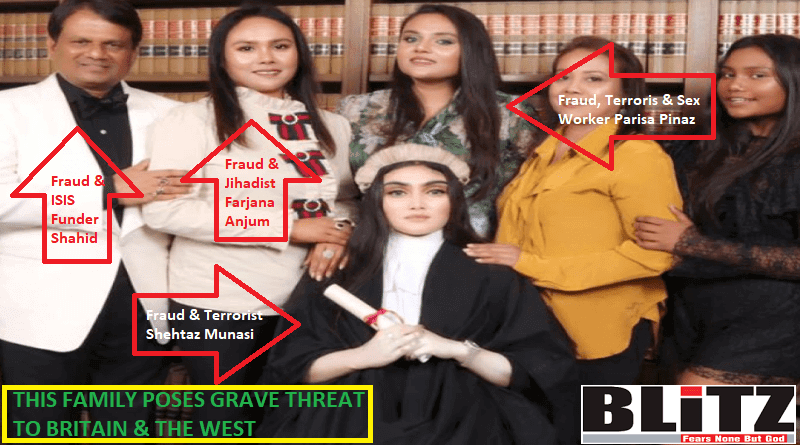 To most of the Britons or more precisely Londoners, a Bangladeshi family living under immigration visa may look like just another immigrant family from Asia. But in reality, they not only are notorious criminals, fugitive frauds, forgers and money launderers, they are funders of Islamic State as well as business associate of notorious terrorist Dawood Ibrahim’s D-Company. Real face of the members of this dangerous family was exposed on January 17, 2019, when the Counter Terrorism and Transnational Crime (CTTC) unit of Bangladesh Police raided their Dhaka residence at House 428, Road 7, Baridhara DOHS, Dhaka and recovered huge volume of arms, ammunition, detonators, explosives, counterfeit currency note, Islamic State propaganda materials and recruitment tools. In the seized documents, CTTC also found evidence of the Khan family’s involvement in terror financing.

In addition to the above mentioned cases, Md. Shahid Uddin Khan is a convict criminal while his wife and daughters also face several criminal cases in Bangladesh.

Md. Shahid Uddin Khan was convicted on April 24, 2019 by Mr. Kaisarul Islam, 4th Additional Chief Metropolitan Magistrate, Court Number 5, Dhaka, Bangladesh under Section 468 [Forgery for purpose of cheating: Whoever commits forgery, intending that the document forged shall be used for the purpose of cheating, shall be punished with imprisonment of either description for a term which may extend to seven years, and shall also be liable to fine], 471 [Using as genuine a forged document: Whoever fraudulently or dishonestly uses as genuine any document which he knows or has reason to believe to be a forged document, shall be punished in the same manner as if he had forged such document] and 109 of the Bangladesh Penal Code with five year’s rigorous imprisonment and fine amounting to Taka Ten Thousand.

Md. Shahid Uddin Khan, his wife Farjana Anjum Khan and daughters Shehtaz Munasi Khan, Parisa Pinaz Khan and Zumana Fiza Khan are leaving posh life with the dirty money they brought into the United Kingdom in 2009. Khans had obtained immigrant status under Visa Tier 1, VAF Number 511702, by showing two million pounds as investment in properties. The National Crime Agency (NCA) in Britain did not inquire about the money this family had invested and even did not bother about the entire amount being dirty money. The family even has established a company named Zumana Investment & Properties Limited (registration number 7417417, dated October 23, 2010).

It was also learnt that Md. Shahid Uddin Khan and members of his family are having business interests worth millions of dollars in the United Arab Emirates with notorious terrorist Dawood Ibrahim’s D-Company. But, surprisingly, members of this family are still roaming into many countries, including Russia and India and continuing their jihadist activities cheating the eyes of the law enforcement agencies.

The United States Department of the Treasury designated Dawood Ibrahim as a terrorist as part of its international sanctions program, effectively forbidding US financial entities from working with him and seizing assets believed to be under his control. The Department of Treasury keeps a fact sheet on Dawood which contains reports of his syndicate having smuggling routes from South Asia, the Middle East and Africa shared with and used by terrorist organization Al Qaeda. The fact sheet also said that Dawood’s syndicate is involved in large-scale shipment of narcotics in the United Kingdom and Western Europe. He also is believed to have had contacts with Al Qaeda leader Osama bin Laden. In the late 1990s, Dawood Ibrahim travelled to Afghanistan under the Taliban’s protection.