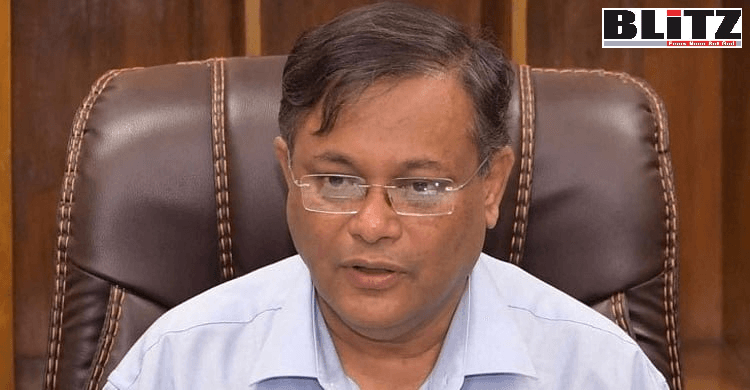 Urging all to remain alert against all conspiracies, Information Minister Dr Hasan Mahmud yesterday said an identified vested quarter is spreading propaganda against the country by renting slot in international media.

“The persons who tried to save the war criminals raised question over the number of 30 lakh [3 million] martyrs in the Liberation War.

“And those ill elements, including the country’s eminent lawyer’s daughter-in-law who is a Jew and the anti-liberation forces who are now dead elements, have been hatred and rejected by the countrymen are conspiring against the nation by renting people and slot in international media in exchange of money,” he said.

The minister made the comments while addressing a discussion titled ‘Ekusher Chetonay Bangabandhu and Bangladesh’ Dhaka Reporters Unity (DRU). Bangladesh Swadhinata Parishad (BSP) organized the discussion marking the ‘Mujib Barsho’ with its advisor Barrister Jakir
Ahmed in the chair.

Hasan said, in recent times, some reports in some media and social media is the reflection of the conspiracies. This is nothing but conspiracy against the country as how untrue and wrong information with ‘cut and pest’ have been published, he added.

He said many people could not tolerate the success as the nation has been able in combating COVID-19 situation under the dynamic leadership of Prime Minister Sheikh Hasina. For this, they are now engaged in the dirty and ill games, he said, adding that it will yield no benefit for them.

The minister said the World Bank did conspiracy against the Padma Bridge assistance. “But it has gone in vain and now all the conspiracies will also face the same fate,” he added.

The persons, he said, who are now fugitive in abroad and who are now under trial in the war criminal tribunal are publishing the reports by renting slot in international media. “The people of the country remained alert and the foundation of Awami League and the foundation of this government led by the party are rooted at the grassroots. So, nothing to gained by doing the conspiracy,” he added.

Hasan said the anti-nation elements were involved in different conspiracies when the newly-independent Bangladesh was moving ahead fast under the leadership of Father of the Nation Bangabandhu Sheikh Mujibur Rahman. The background of assassination of Bangabandhu was created through the killing of five AL lawmakers one by one and the Father of the Nation was killed brutally, he added.

“The conspirators are making the plots when the world community is praising the unprecedented development of the country under the leadership of Bangabandhu’s worthwhile daughter and when the country left behind Pakistan at all indexes including human and economy,” he said.

He said Bangladesh’s position is in third among the only 22 countries which achieved positive GDP growth during the prevailing COVID-19 situation. The whole world and the World Health Organization are congratulating Prime Minister Sheikh Hasina for combating the situation (COVID-19) successfully, he added.

Hasan termed the month of February as the month of establishment of Mather Language and February 21 as the first spark of the movement of freedom. History has never been suppressed, and Father of the Nation Bangabandhu had an outstanding contribution to the Language Movement, he added.

He said protest was raised when Mohammad Ali Jinnah declared that Urdu will be the only state language of Pakistan. The then young student leader Sheikh Mujibur Rahman raised the protest and a meeting against the declaration was held at Dhaka University which was presided by him, the minister added.

Bangabandhu went on a hunger strike in the prison on February 21, 1952, for the protest of killings, arrests and the demand of language, he said, adding that many don’t know the history.