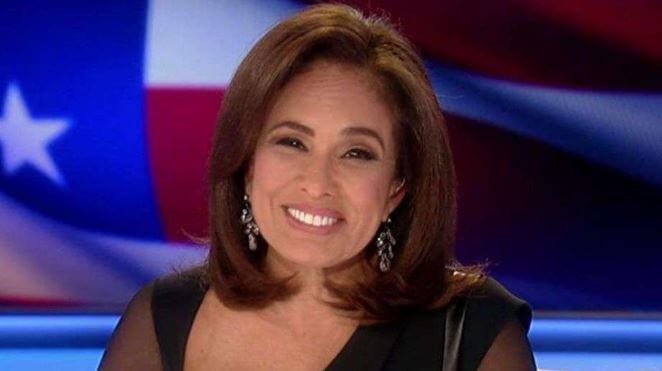 Judge Jeanine Pirro is the victim of creeping Sharia law. The FOX News host has been publicly vilified for comments made on her weekend show. The judge’s great crime? She criticized Ilhan Omar, the rabid anti-Semite and Muslim Somali Democrat congresswoman from Minnesota.

“She’s not getting this anti-Israel sentiment doctrine from the Democrat Party. So if it’s not rooted in the party, where is she getting it from?” Pirro said. “Think about it. Omar wears a hijab, which according to the Koran 33:59 tells women to cover so they won’t get molested.

The judge was immediately attacked by the PC police. The social media liberal mob denounced her as an Islamophobic bigot, who should be fired.

The reason: Pirro had allegedly claimed that wearing a hijab is both un-American and unconstitutional, thereby demonizing not just Omar but all devout Muslim women.

For example, the New York Times columnist (and fervent Never Trumper), Bret Stephens, called her a “disgrace” on Twitter.

“Ilhan Omar’s right to wear hijab in accordance with her religious convictions is as constitutional as an Orthodox Jewish woman’s right to wear a sheitel,” Stephens wrote. “Anything less is un-American.”

Many others went much further. Commentators from the establishment media — CNN, MSNBC, the Washington Post — claimed Pirro’s words were beyond the pale. According to them, they were hate speech — and for this crime, she should lose her job.

FOX News also threw her under the bus. The network did something rare and almost unheard of: It publicly rebuked her.

“We strongly condemn Jeanine Pirro’s comments about Rep. Ilhan Omar,” the network said in a statement. “They do not reflect those of the network and we have addressed the matter with her directly.”

In other words, the network warned her to never challenge Islam again, and if the backlash from liberal activists becomes too intense, then they will cut Pirro loose. So much for “fair and balanced.”

Yet, this begs the question: What did Pirro say that was so wrong? Contrary to liberal lies, she did not stipulate that wearing a hijab makes someone un-American or is inherently unconstitutional. The judge’s words were deliberately distorted. What she did say, however, is that someone in the press should ask Omar about whether she adheres to Sharia law. That is, if the Muslim congresswoman insists on wearing a hijab because she has a fundamentalist interpretation of the Koran, then how far does her adherence to Islam go?

For the Koran is crystal clear: Devout Muslims must practice and live under Sharia law. This is why most Islamic societies — Iran, Saudi Arabia, Pakistan, Turkey, Qatar, Egypt, Sudan, Indonesia — are based on Sharia principles.

In Islam, there is no separation of mosque and state; the Koran is the state, it provides the government with its very moral and political legitimacy. Islam is more than a religious faith. It champions a distinct socio-political-legal system that demands Muslim supremacy. This is what distinguishes it from Christianity, Judaism or Buddhism. And, yes, Pirro is 100 percent correct: Sharia law is fundamentally incompatible with our Constitution.

Moreover, Pirro did not single out Omar simply because she’s one of the first two Muslim women elected to Congress (along with Rep. Rashida Tlaib of Michigan). Rather, Omar is an Islamic fundamentalist and a virulent anti-Semite, who has engaged in sickening Jew-baiting.

She has said that pro-Israel Americans in Congress only support the Jewish state because they have been bought off by Jewish money. “It’s all about the Benjamins, baby,” as she recently put it, referring to $100 bills which have Benjamin Franklin’s face on it.

In another instance, Omar claimed that American Jews have a “dual loyalty” and their real support is toward Israel, not the United States — a classic anti-Semitic smear. She has expressed sympathy for convicted ISIS terrorists. She champions and has even raised money for Hamas and Hizbullah, Islamist terror groups committed to annihilating Israel. Omar also married her brother to ensure he attain a visa to remain in the U.S. She has not only committed incest but immigration fraud — serious crimes.

It is remarkable, bordering on the perverse, that liberals in the media and Democrats in Congress refused to specifically condemn Omar for her blatant Jew-hatred and anti-Semitism. Yet, they are calling for Pirro’s head for the thought-crime of questioning a Muslim. This is now unacceptable to our PC cultural elites; Islamists must be appeased at all costs.

The Left’s real fear is that someone may take up the judge’s suggestion and ask Omar whether she supports Sharia law. Because chances are the answer may be — in fact, it probably is — yes. And then what do they do?

Jeffrey T. Kuhner is a columnist at WorldTribune.com and the host of “The Kuhner Report” weekdays 6-10 a.m. EST on WRKO AM-680 in Boston.