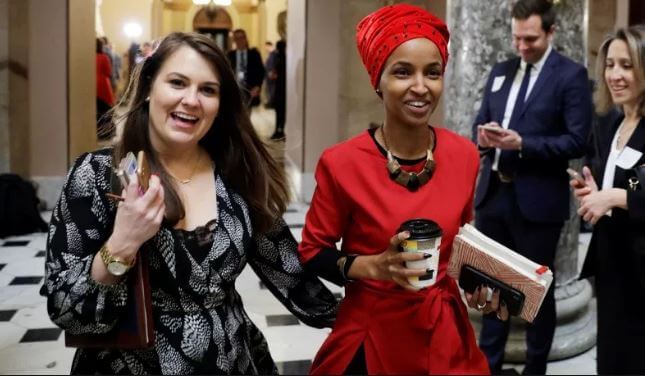 U.S. Rep. Ilhan Omar has faced a series of controversies over her statements about Israel, Jews and even the 9/11 attacks. Each time, allies were quick to rally to her side and argue the statements weren’t hateful exhibitions of ignorance.

But they’ve been largely silent this week after the Investigative Project on Terrorism’s (IPT) revelation that she cast U.S. soldiers as the bad guys in the 1993 Battle of Mogadishu, better known as the “Black Hawk Down” incident.

In response to a Twitter post calling the Mogadishu battle the “worst terrorist attack” in Somali history because 19 American soldiers were killed and 73 wounded, Omar falsely claimed that the United States killed thousands.

“In his selective memory, [the writer] forgets to also mention the thousands of Somalis killed by the American forces that day! #NotTodaySatan,” Omar wrote in 2017, while still a Minnesota state legislator.

The Women’s March held a #WeMarchWithIhlan Twitterstorm on Tuesday in Omar’s defense, but it was arranged before the IPT exposed the “Black Hawk Down” tweet. Those who posted, including Sarsour and CAIR San Francisco Bay Area Executive Director Zahra Billoo, made no effort to defend that specific post.

“The silence from Congresswoman Omar’s identity Left in the Democratic Party is deafening,” said Zuhdi Jasser, president of the American Islamic Forum for Democracy. “Maybe it’s just because there is no way to publicly dismiss Americans and by association Muslims who love our military heroes.”

Jasser served as a Navy doctor on the U.S.S. El Paso at the time of “Black Hawk Down.”

“For them to face that will mean breaking their silence on her repulsive position on Operation Restore Hope,” he said, referring to a U.S. mission to open humanitarian aid routes to Somalis facing a humanitarian crisis. Local warlords had been intercepting the aid. The Battle of Mogadishu started when the U.S. tried to apprehend warlord Gen. Mohammed Farah Aidid.

In previous cases, allies tried to rebut criticism about Omar’s statements by claiming she said nothing wrong, or that the controversies were contrived and driven by Islamophobia, racism, and sexism.

The IPT story generated plenty of attention on social media and was covered by news outlets including FoxNews.com, The Daily Mail, The New York Post, and The International Business Times.

Media Matters published an article April 10 defending comments Omar made at a CAIR California banquet. Many people felt her statement that “some people did something” in the 9/11 attacks that resulted in Muslims facing civil rights threats both grossly minimized the significance of the al-Qaida attack on America and the national security response.

“The controversy surrounding this line … is based on misinterpreting what she said as downplaying the 9/11 attacks – something that she never did,” Media Matters’ Parker Molloy wrote.

Retired Chief Warrant Officer Mike Durant, the only surviving pilot from the “Black Hawk Down” operation criticized Omar, telling the IPT that she completely ignored the humanitarian nature of the American mission in Somalia in 1993 and the fact U.S. troops were forced to defend themselves.

Fellow Battle of Mogadishu veteran Sgt. Maj. Kyle Lamb backed up Durant. He said he took Omar’s tweet personally because he and his colleagues saw their friends’ bodies dragged through the streets of Mogadishu.

“We were trying to take out Aidid because he was a clan leader … that had kind of taken over [Mogadishu],” Lamb said on Fox News. “They were taking the food, any of the aid that we were giving to Somalia, also weapons and they were running drugs … He needed to be eliminated.”

A Somali official estimated 133 Somali militiamen died in the fighting with U.S. Rangers and Delta Force soldiers. Journalist Mark Bowden, author of the definitive account of the Battle of Mogadishu, Black Hawk Down: a Story of Modern War, estimated 500 Somali deaths. Others put the Somali death toll closer to 1,000. A 2000 Rand Corporation report estimated 300 noncombatants were killed.

No credible estimate is anywhere close to Omar’s “thousands.”

“Personally, I find what she said appalling,” Minnesota VFW Commander Tom Hanson told the IPT. “I have real difficulty with her saying what she says about our military.”

Dov Hikind, a former Democratic New York State Assemblyman, shares the VFW’s view that Omar has “a real problem with this country” and what it stands for.

“She’s going to continue to do things and say things that cross the line,” Hikind said. “The big shame as far as I’m concerned as someone who has been a Democrat all of my life and a member of the New York State Legislature …I’m embarrassed and shocked by the way the Democratic Party is behaving with all of this.

“There’s this incredible double standard when it comes to her.”

For reasons that aren’t yet clear, her allies weren’t ready to try to bail her out again.