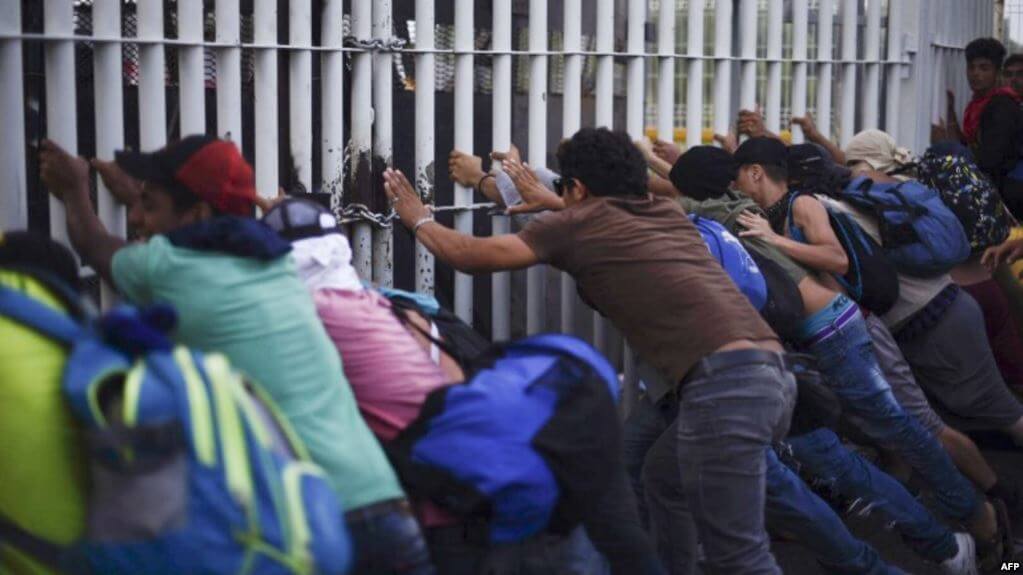 For the last 8 years I have been waited on hand and foot by a 40 something Mexican man, Jose, at a local Sweet Tomatoes where my salad gluttony knows no limits. The 5 foot nothing busboy can’t do enough for me; “Can I get you a glass of water?”, “Can I get you another plate?”, “Can I take your trey away?” He doesn’t stay still for one moment between dozens of tables he looks after. Jose’s employer is a huge American food chain that expects the best and fastest customer service in the world, or else…

A Honduran army a thousand strong, made up mostly of young males (despite liberal MSM’s desperate fib to the contrary) just stormed United States’ Southern border from the Mexican side where my busboy is from.  Tear gas was necessary on Sunday to stop the onslaught on American sovereignty.

My daughter sends me a text showing me the asinine choices of topics she has to choose from for an essay in an elective Sociology class. I cringe as a I see the following amongst other topics:

“The institutionalization of gender norms is primary cause of sexual harassment in the workplace”.

“Nationalism in the 21st Century functions as a mechanism of social control.”

I almost upchuck my lentils and broccoli as I consider the mind coercion Canadian Academia is subjecting my kid to. (And she’s not exactly attending a liberal university.)

I ask her what her essay choice will be.  Without any hesitation she responds, “Globalization is resulting in homogenization of culture”.

Hallelujah! Smart girl! I have cause to celebrate as my nineteen year old proceeds to present three  very sound arguments for her essay position. (How the hell does she manage to stay sane in the environment of utter libtardation?)

We proceed to have a one hour discussion on the topic of globalization and its dismal effects on cultural diversity and individualism.

A person I’m dining with asks me “How did you get here (meaning North America)?”

Do I explain the last 70 years of failed communist policies? The leftist state-sponsored anti-Semitism?  The dissemination of fake news and propaganda by Soviet Media as an onslaught on the collective cognizance and sub-conscience? The subjugation of individual rights to an elitist comrade collective of the Proletariat? The utter failure of the planning economy? The inevitable poverty of a wealth-redistributing homogeneous society?

No. I decide to tell her something entirely different; the story of an actual process of a person fleeing horrible living conditions in search of a better world.  This, too, can be a separate essay or even a book, but I didn’t have that much time.

I begin by pointing out that every Jewish individual fleeing the iron gates in the 1970s-1990s required a legal invitation-visa from the State of Israel. This enabled the submission of the said visa to the Soviet Ovir and the consequent waiting period of many months (years at times) for permission to leave the country. During this time, the Soviet regime required that “traitors” (us) were promptly fired from their respective jobs, rendering us broke, with public shaming sessions to follow. After all, the treasonous Jew needed to be made an example of.  Public tyranny to compliment the denial of financial means to feed one’s children was standard practice. None escaped it.

If one managed to withstand the public lynching and was lucky enough to receive official permission to leave, he escaped with pretty much nothing but the shirt on his back. Any family heirlooms, relics, art, jewelry had to be left behind: the communist State was always the rightful owner of your “stuff” and they never let you forget it.

An Israeli rescue visa made one even more susceptible to Russian border agents’ “generosity” and humanity. I remember watching a Ukrainian Jewish woman swallow a diamond, just before she was stripped-searched. (The diamond retrieval process, afterwards, is not too difficult to imagine.)

A few days later, there you are; passport-less, shirtless and penniless in Rome, at a refugee outpost, waiting for your turn to have an asylum crack at Canada (or the US, as the case maybe).

After three months or so, the Canadian Consulate in Rome finally summons you. A family is then asked to cooperate with a legal vetting process whereby the Consulate reps decide if you’re appropriate enough, healthy enough, young enough with plenty of productive years ahead, professional enough, educated enough, English-speaking enough, and socially equipped enough to enter Canadian shores.

After the initial meeting, you return to your tiny HIAS-paid for 10 cu. ft. room, where you sleep in winter coats because you have no money for heat.  And wait.

And wait. And wait. For eight months, to be exact. (In some cases much longer). All in a country where you have no legal rights, no ability to work, and where your children can’t attend school. Yet you are over-the-moon thrilled and thankful.  Absolutely on top of the world for having escaped the evil clutches of your birth country. In fact, you’re grateful to Canada for even presenting you with this opportunity based on merit, to have a better life.

What happens after the nearly year-long vetting process?

Plenty were refused Canadian entry. But if your family reached a score of seventy or more based on the Canadian government’s prescribed criteria for entry, you’d qualify for the Canadian “legal immigrant” status.

Now, still penniless, shirtless,  and passport-less, you’re starting to memorize the words to “O’ Canada”, grateful for every last minute spent in the legal immigration process. But you’re not done yet: now you have to pass a thorough health exam. If you carry any infectious diseases which will pose a threat to the Canadian population, you will be refused entry.  Those that were refused for any reason, would begin the legal application process to enter other countries.

But what in the world do all four Scenes above have to do with each other?

While the illegals storm the US border in an attempt to gain illegal vet-less access to the greatest country in the world, Jose and I are sickened to our core. There is no greater injustice in the world than to sanctify entitlement, condone criminality & allow aggression from some, yet demand complete lawful compliance from others.

The legal immigrants suffered financially, professionally, emotionally and physically much more than the two month trek by migrants from Honduras or Guatemala. They suffered for years, at times. In case of Soviet-era dissidents, some suffered for up to a decade or even more. And in the gulag, for most of it.

The caravan of illegals is the biggest insult to Jose, to me and hundreds of thousands of people from all over the world currently in the legal queue to obtain legal immigrant status.  The legal immigrant didn’t have a penny to his name, let alone $7000 per head to pay to the cartel in a human trafficking scheme. (Incidentally, rendering the Honduran army hardly “refugees” but mostly economic wanna-be’s.)

Bleeding for migrants isn’t compassion. Every crocodile tear shed for these illegals is a brutal crack of a whip on the back of a legal immigrant. These pathetic misguided tears legitimize criminality, the coyote cartels and their dirty $$ business of human trafficking – all at the expense of Jose, his family, their struggle, and all good law-abiding people who legally entered this country.  The plight of a legal immigrant is far greater and consequential than a 2 month trek by a migrant assisted by Red Cross and George Soros’ cash.

As far as my essay-writing child…By her topic choice and subsequent arguments, it’s clear she intuitively understands the preciousness of borders, the importance of sovereignty and the need for protection of culture and laws. The very lifestyle all her four grandparents paid a very dear price to obtain as vetted merit-based immigrants, not criminals trying to take down a border.

I find my busboy Jose and hand-deliver a hefty tip. He says, “Thank you, but please give that tip to Manuel, he’s taking over for me.” I double the tip and instruct him to share with Manuel. “See you next time, Valerie”, he laughs.

The fact that law, order & sovereignty, as a concept, requires even the slightest debate or a minuscule degree of defense or explanation…is a testament to the far-reaching dangerous absurdity of liberalism, leftism and all their politics.

Valerie Sobel is the Special Contributor of Blitz