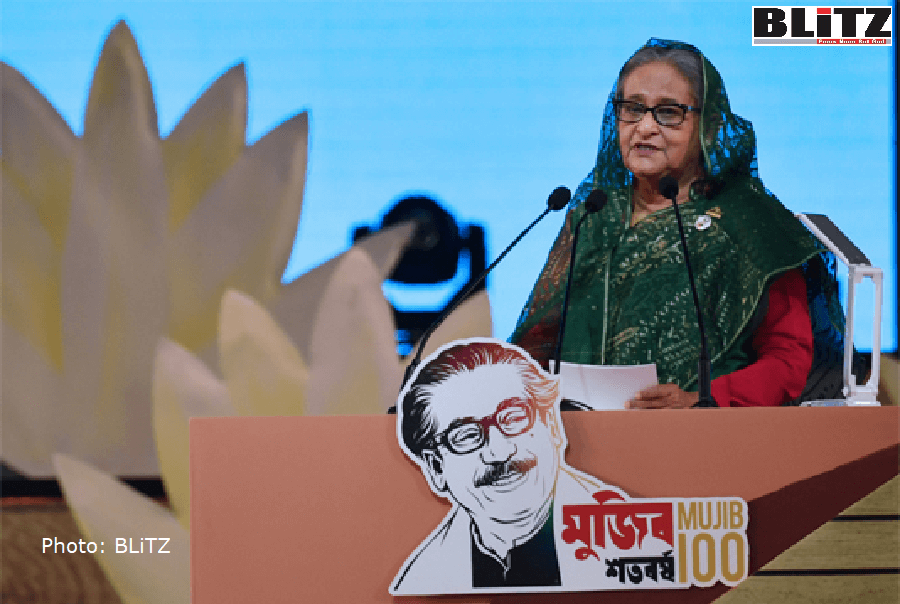 “India is inextricably linked to Bangladesh’s birth,” she told the concluding of the 10-day national celebrations of Father of the Nation Bangabandhu Sheikh Mujibur Rahman’s Birth Centenary and Golden Jubilee of Bangladesh’s 1971 Independence at the National Parade Square.

She simultaneously paid rich tributes to the Indian veterans who fought for Bangladesh’s independence alongside Bangladeshi freedom fighters while a number of octogenarian Indian military officials who fought the 1971 war were president on the audience line.

The Bangladesh premier urged India to take the lead role in developing a politically stable and economically vibrant South Asia in line with Modi’s “neighbourhood first” policy and being the biggest country in the region.

She appreciated India for sending vaccines for preventing coronavirus to the neighboring countries, including Bangladesh calling the gesture a “reflection of that policy”.

Sheikh Hasina added: “If we move forward hand in hand, the development of our people is inevitable” and noted that Dhaka-New Delhi relations by now reached to a new height.

President Abdul Hamid joined as the chief guest, also witnessed by Bangabandhu’s youngest daughter Sheikh Rehana along with others.

Sheikh Hasina said her government now overcome multiple obstacles to take Bangladesh on the track of prosperity which by now earned the country the status of a developing country from a least developed one.

The premier said serious efforts were underway to make Bangladesh “an upper-middle-income country by 2031 as per UN declared sustainable development goals and a developed and prosperous one by 2041”.

“Let us (now) pledge to forget all differences and work together for the welfare of our peoples with a view to establishing South Asia a developed and prosperous region” as the country celebrates the two auspicious events simultaneously, she said.

Sheikh Hasina along with Sheikh Rehana earlier welcomed at the Parade Square the Indian premier, who handed them over the Gandhi Peace Prize 2020 awarded to Bangladesh’s founder in recognition of his outstanding contributions towards social, economic and political transformation through non-violent and other Gandhian methods.

Sheikh Rehana, on behalf of the National Implementation Committee for the Birth Centenary Celebration of Father of the Nation, presented Modi the “Eternal Mujib” memento.

The logo of Golden Jubilee of Independence was unveiled followed by a presentation of its theme song at the function.

The Indian Premier became the fifth among the world leaders to attend the celebrations.

The prime minister said Bangladesh’s foreign policy adopted by the Father of the Nation is imbued with “friendship to all, malice to none” and the country is moving ahead following this policy.

Mentioning that Bangabandhu was a great believer in regional cooperation, she said: “In addition to the political freedom of the oppressed people of the world, he dreamt of economic emancipation which made him to emphasize regional cooperation based on mutual trust, confidence, and equality.”

Stating that India has now become the country’s one of the development partners, Sheikh Hasina said during the last few years, Bangladesh has enhanced cooperation with India in various sectors including trade and commerce, communication, power, energy and agriculture.

Referring to the recent inauguration of the “Moitree Bridge” over the Feni River to increase connectivity between the North-Eastern Indian states and Bangladesh, she said these Indian states are now able to use the Seaport and Airport of Chattogram as well as use Mongla port.

The premier said India is not only nextdoor neighbor, the two countries also have historical, social, cultural, heritage, and geographical rapports.

She said the people of India and its government were immensely involved in the independence process of Bangladesh.

Sheikh Hasina recalled that during the great liberation war in 1971, India sheltered about 10 million people who fled from Bangladesh on the face of persecution by Pakistani military. “The neighbouring country helped our freedom fighters with training, arms, and ammunition,” she continued.

The premier said the final victory was achieved on 16 December in 1971 through a joint operation of the Bangladesh-India Allied Forces.

Acknowledging the sacrifice of Indian soldiers as well as self-sacrifice, support, and cooperation of the people during the liberation war, she gratefully remembered that contribution and prayed for salvation of those who sacrificed their lives.

The prime minister also expressed her personal gratitude to the Indian people and government, as she and her younger sister Sheikh Rehana were given shelter there (India) after the brutal assassination of her father Bangabandhu Sheikh Mujib on 15th August 1975.

She said she and Sheikh Rehana survived as they were on a visit to Germany, but became homeless when military dictator Ziaur Rahman grabbed power illegally and barred them from returning to the country.

Sheikh Hasina said Awami League, after returning to the state power conferred honor to the friendly nations and people for their outstanding contribution to the War of Liberation.

On this day in 50 years ago, the Father of the Nation declared independence just before he was arrested by the Pakistani military junta, she said, adding Indian Prime Minister Narendra Modi on the historic day today graced the occasion by attending physically as the Guest of Honor.

“On behalf of the government, the people of Bangladesh, my younger sister Sheikh Rehana and myself, I would like to express my sincere thanks and gratitude to the Prime Minister Modi and the people of India,” the premier added.

Sheikh Hasina also thanked the government of India and Prime Minister Narendra Modi in particular for conferring the prestigious “Mahatma Gandhi Peace Prize-2020” on Bangabandhu. “I must say India indeed honored a worthy leader in South Asia as well as a real fellow of Gandhiji through this award,” she said.

Sheikh Hasina said the government of India has taken the initiative of arranging the Bangabandhu-Bapu Digital Exhibition commemorating the two most-reputed leaders of this subcontinent — Bangabandhu Sheikh Mujib and Mahatma Gandhi.

For this exhibition, Sheikh Hasina sincerely thanked her Indian counterpart.

“Our gratitude to all of them,” she said, extending her heartfelt thanks to those who have sent greetings, video messages and others on this auspicious occasion.

Later, the Bangladesh premier and her Indian counterpart and Sheikh Rehana enjoyed a colourful cultural function and fireworks at the concluding ceremony of the 10-day celebrations.