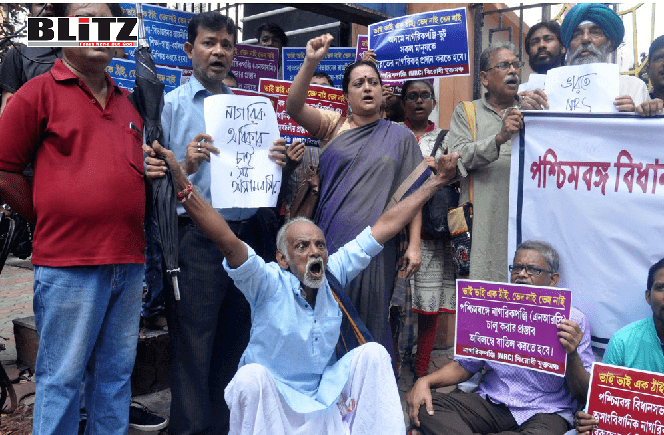 Despite restrictions on criticizing the National Register of Citizen (NRC) in India, mainstream newspapers in the largest democracy in the world are continuously criticizing and even condemning the initiative of registering Indian nationals in Assam and some of the adjacent provinces.

With Indian Prime Minister Narendra Modi and Home Minister Amit Shah saying that the provision that would give special rights to indigenous people of Assam there is confusion among lakh of Hindu Bengalis who missed out in the NRC list but consider themselves as Assamese as any other person. According to analysts, the ruling radical-Hinduist Bharatiya Janata Party (BJP) has on purpose been giving support to NRC with the ulterior motive of hunting Hindu votes, mostly from the non-Bengali nationals. Earlier they have made best use of the Hindutva rheotactic and had ignored non-Hindu voters, particularly Muslims with the same agenda and have seen tremendous success. The majority of Hindus in today’s India are seeing BJP and its ultra-Hinduist political cohorts as “saviors”, and believe, India will be able to come out of its secularist “hypocrisy” and transform the country into a radical Hindu state. The majority of those pro-BJP populations are arguing saying, if Christians, Muslims, and Buddhists can have their own country, why the Hindus should be deprived of “rescuing India” from the “evil clutches” of the non-Hindus.

Meanwhile, the leaders of BJP are not only giving instigation to Hindus in waging “silent war” against Muslims and Christians, they even are showing the extreme audacity of ignoring the sovereignty and independence of the neighboring nations. They even are mad on Nepal, despite the fact of it being a Hindu state. The only “crime” of Nepal is its growing relations with China.

In my personal opinion, the reason behind the over-playing of the NRC card by the BJP bigwigs is, they are feeling uncomfortable at Bangladesh’s growing relations with China. Indian policymakers are desperately willing to see Bangladesh of being totally dependent on New Delhi instead of looking for newer friends in the world. One of the key reasons behind the worries of BJP leaders and Indian policymakers is – they believe, growing Sino-Bangladesh relations will greatly contribute to the faster economic growth of Bangladesh. Moreover, they fear Bangladesh’s joining President Xi Jinping’s One Belt One Road (OBOR) program. Because Bangladesh’s affiliation with the project will connect the country up to the African and European continent and beyond. This will greatly contribute to enhancing Bangladesh’s export trade, which will ultimately transform Bangladesh into a developed nation within the span of a maximum of 15 years. Indian policymakers do not want Bangladesh to cross the prosperity meter of India, simply because, a developed Bangladesh will generate extreme anger amongst the people in West Bengal and adjacent provinces. They will become angry with the Indian policymakers and may even become frustrated, which actually may lead to the disintegration of India.

But, this tendency of the Indian policymakers would ultimately be proved as counter-productive. The NRC issue and Indian policymaker’s hostile attitude already is having a negative impact amongst its neighboring countries. For example, those pro-liberation forces in Bangladesh, who had always been supportive of excellent relations between Dhaka and New Delhi even are becoming aggrieved. They are seeing NRC as a tool of threatening countries like Bangladesh.

Indian policymakers are repeatedly saying, a large number of non-Hindus had migrated to India from Bangladesh during the past several years. In reality, this claim is baseless, because, Bangladesh’s economy had always been much better than that of West Bengal or Assam and there is no reason for Bangladeshi Muslims migrating to India. In fact, those people whose names had not been included in NRC are purely Indians. Any attempt to forcibly pushing those Indian nationals to any neighboring countries are not only unethical but it would stain the relations between India and that neighboring country.

Since 1971, relations between Bangladesh had always been excellent, save those periods when radical Islamist parties like Bangladesh Nationalist Party or Jamaat e Islami had ruled the country or those autocratic regimes of Major General Ziaur Rahman. During the rule of Bangabandhu Sheikh Mujibur Rahman and subsequent rule of our Prime Minister Sheikh Hasina, Bangladesh-India relations had been extremely warm. Particularly Prime Minister Sheikh Hasina has extended all-out support and efforts in helping India is uprooting insurgency groups like United Liberation Front of Assam (ULFA) and various smaller separatist groups. There is not even a single base of any anti-India separatist groups now in Bangladesh. Prime Minister Sheikh Hasina has very generously extended transit facilities to India enabling New Delhi in establishing easier connectivity with its provinces in Assam, Tripura, Meghalaya etc. As we are grateful to India for its support during our war of independence in 1971, Indian policymakers should be equally grateful to our Prime Minister Sheikh Hasina.

New Delhi should combat any anti-Bangladesh activity inside India. Leaders of the ruling party should realize the importance of maintaining excellent relations with Bangladesh. On the other hand, they must adopt the policy of not interfering into the internal affairs of Bangladesh. They also should refrain from any attempt of sabotaging Bangladesh’s growing relations with the international community, including China.

India has nothing to fear from Bangladesh’s growing relations with China. Instead, policymakers in India need to follow Prime Minister Sheikh Hasina as their role model and contribute to resolving the growing unemployment crisis as well as economic hardship in their own country.

Being our friend and good neighbor, India should feel delighted at the progress and prosperity of Bangladesh.

Salah Uddin Shoaib Choudhury is a multi-award-winning journalist and editor of Blitz. Follow him on Twitter at Salah_Shoaib