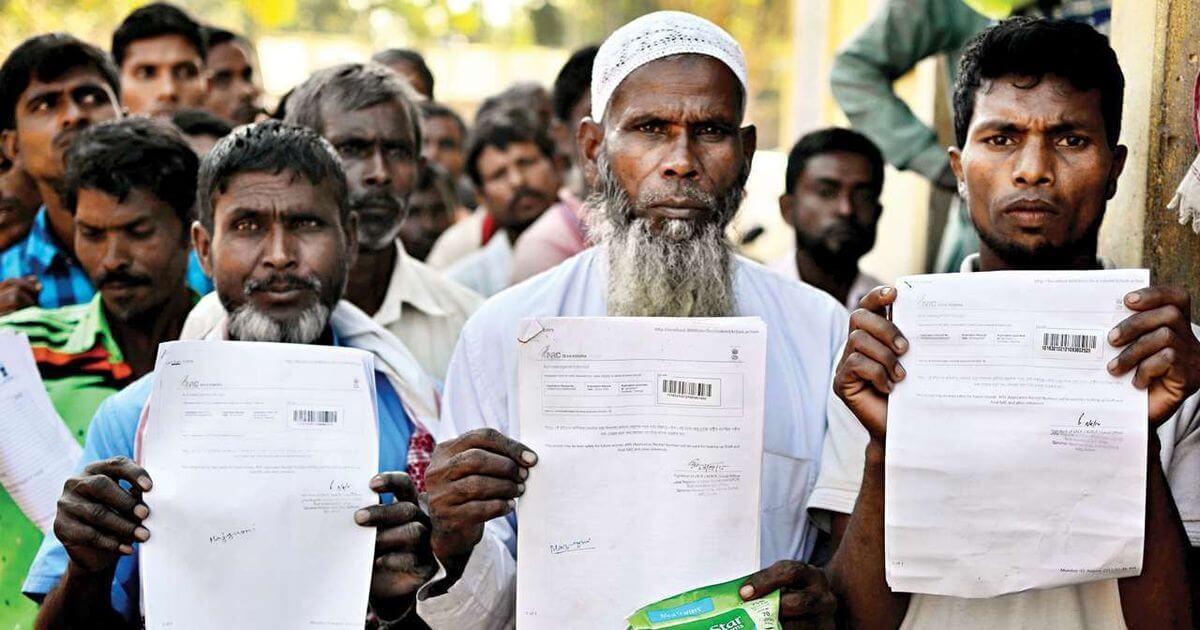 Indian government is taking all out preparations for pushing over four million Bangla-speaking Muslims into Bangladesh from March this year. Meanwhile, taking note of the Citizenship (Amendment) Bill pending in the Rajya Sabha, the Supreme Court on January 14, 2019 adjourned the hearing of a PIL which challenges the orders issued by the Central Government making way to grant of citizenship to illegal migrants.

According to the Wire, for nearly a week now, there have been massive public protests across Assam against the Centre’s decision to push for the Citizenship (Amendment) Bill, 2016 in parliament. The Bill extends – on religious lines – the cut-off date for “illegal immigrants” in the state to acquire Indian citizenship from March 24, 1971 to December 30, 2014.

It was passed in the Lok Sabha in the recent session and is awaiting the Rajya Sabha’s nod.

The 1971 date, exclusive to Assam, was appended to the Citizenship Act, 1955, under Clause 6A. This was agreed to in the Assam Accord, which put a lid on the six-year-long anti-foreigner agitation in 1985. Though the Supreme Court is yet to decide the very validity of Clause 6A, the bill amends its key provision.

By extending the cutoff date to 2014, the Modi government is segregating undocumented immigrants from neighbouring Bangladesh into Hindus and Muslims. If the Bill becomes law, Hindus from that country living without the correct documentation not just in Assam but in the rest of the country too would be given preferential treatment by bringing in a new citizenship cut-off date – December 31, 2014. This date would go against the Assam Accord, which doesn’t differentiate between undocumented immigrants living in Assam on the basis of religion. This has been the trigger for the protests.

Besides Bangladesh, the Bill also aims to give Indian citizenship to non-Muslims from Pakistan and Afghanistan if they are victims of ‘religious persecution’.

Although the Centre’s move also seeks to grant citizenship to ‘persecuted’ Christians from these three Muslim-majority countries, the Christian-majority states in the Northeast have also joined Assam in opposing the amendment as it would affect the indigenous composition of their societies. Due to the massive public outrage, almost all the BJP’s partners in the Northeast have threatened abandon the North East Democratic Alliance (NEDA).

The BJP’s partner in Assam, the Asom Gana Parishad (AGP), has already walked out of the coalition government. Though the Modi government tried to offer a consolation to the Assamese by setting up a “high-powered committee” to suggest ways to implement Clause 6 of the Assam Accord, it failed to get any traction. Almost all members, including former tourism secretary M.P. Bezbaruah, who was to head the committee, refused to be part of it. Clause 6 of the accord entails constitutional safeguards to “Assamese people”.

Commenting on the controversial Bill, Prafulla Kumar Mahanta, AGP leader and former chief minister, who was a signatory to the Assam Accord in 1985 told Times of India, “In the entire nation determination of citizenship is done under the Citizenship Act, 1955. After our anti-foreigners’ movement against lakhs of illegal migrants from Bangladesh who settled in Assam, we got the Assam Accord in 1985 and a new cut-off date, March 24, 1971, to determine citizens. The Accord says that anyone who has entered Assam after March 24, 1971 would be treated as an illegal migrant and will be deported. We have absorbed all immigrants till this date but now this government wants us to take the burden of more people, who have entered up to December, 2014.”

Responding to a question as to whether ruling Bharatiya Janata Party (BJP) has done anything wrong by bringing the amendment bill, Mahanta said, “BJP has completely ignored the Assam Accord and brought this bill by the backdoor. If the bill is passed, it will not only violate the provisions of the Accord but because of this legislation, the indigenous people of Assam will lose their linguistic and cultural identities, and even their political rights. They will become minorities in their own homeland as the amendments will make more illegal migrants Indian citizens. Assam will become an overpopulated state.”

If Indian Prime Minister Narendra Modi is guilty of pushing this bill, he further said, “I want to ask him how much has the promise he had made as the prime ministerial candidate in 2014 to make Assam free from illegal migrants from Bangladesh been fulfilled? He had promised that after May 16 in that year, after he assumed charge as prime minister, all illegal Bangladeshis living in Assam would be deported with their bags and baggage. Has he been able to keep that promise? He, instead, has now welcomed them and wants to give them citizenship.

“The bigger question is why did he take this step against Assam and its people? If he has the courage, I dare him to go back to 1951 (the base year for updating of the National Register of Citizens) as the cutoff date in the amendment bill.”

According to the Economic Times, “the passage of the Citizenship (Amendment) Bill, 2019 in Lok Sabha has led to a new phase of turmoil in India’s northeast, evident from the violence during the January 8 Assam bandh called by All Assam Students Union (AASU) which many indigenous groups supported in other northeastern states. Asom Gana Parishad (AGP), which ran Assam for two terms, has reneged on its alliance with BJP in protest against the bill and other regional parties in Meghalaya, Nagaland and Mizoram who have formed with BJP support have also raised strong protests against it.

“They fear that the bill, which seeks to provide Indian citizenship to non-Muslim migrants from Bangladesh, Pakistan and Afghanistan on grounds that they fled to escape religious persecution, would legitimise the presence of Bengali Hindus and Buddhist Chakmas from Bangladesh in their states. BJPs spokesperson in Assam, Mehdi Alam Bora, has resigned from the party in protest.”

It further said, “BJP feels this move will help it recover lost ground among a substantial segment of the indigenous communities. According to the 2011 census, Assam has around four million tribals that account for 13% of the state’s 31 million population. As and when these six OBC communities are extended ST status, the state’s tribal population is expected to rise to 54% of the total population. While the communities now listed as ST may not take kindly to the Centre’s decision, the six communities, BJP expects, will overwhelmingly welcome the move.

“According to a survey conducted by Lokniti of the Centre for the Study of Developing Societies after the 2016 Assam state polls, 49% of the population of the six communities demanding ST status voted for BJP, significantly eating into Congress vote share, specially among the Tea tribes, whose roots are in the Chotanagpur region. During the 2011 assembly elections, the corresponding number was 33%. Granting ST status may double BJP’s vote share among these communities if not more – or so party party managers like Biswa Sarma would believe.”

The Supreme Court bench comprising Chief Justice CJI Gogoi. Justices Ashok Bhushan and S K Kaul gave liberty to the petitioner to mention before the court after the budget session of parliament It was hearing a PIL by Guwahati based NGO Nagarikatwa Aain Songsudhan Birodhi Mancha (Forum Against Citizenship Act Amendment Bill) filed through Advocate Manish Goswami,in which it was alleged that the “uncontrolled influx of illegal migrants from Bangladesh to Assam has caused huge demographic changes in Assam.

The petition lays specific challenge to the Passport (Entry into India) Ammendment Rules, 2015 notifed on 07/09/2015, The Foreigners (Ammendment) Order,2015 notifed on 07/09/2015 and S.O 4132 (E) dated 23/12/2016 issued by the Ministry of Home Affairs. The cumulative effect of these rules is that Hindus, Sikhs, Parsis, Jains, Buddhists and Christians who migrate to India from Pakistan, Afghanistan and Bangladesh will not be treated as ‘illegal migrants’. They are exempted from the application of Foreigners Act, 1946 and the Passport (Entry into India) Act, 1920. The exemption is available to migrants who came to India before December 31, 2014.

The petitioners contend that the government orders distinguish migrants on the basis of religion, and make religion a basis for claim of citizenship. “It has introduced religion as a new principle into the citizenship law and can be conveniently branded as ‘communally motivated humanitarianism'”, says the PIL. The illegal immigrants who are to be granted the benefit of this legislation are to qualify for citizenship only on the basis of religion; which goes against one of the basic tenets of the Indian Constitution, secularism.The indigenous people who were once the majority has now become a minority in their own land, the petition says. The petitioners further submit that the government orders violate the Assam Accord, which treated all those who entered the state after March’1971 as illegal immigrants. “The amendment defeats the purpose of the accord and opens the floodgates to more illegal immigration and consequently increases claims on diminishing resources. The transformation of migrants, hitherto perceived as illegal encroachers, into legitimate citizens cannot be justified”, the PIL states. The proposed amendment to Citizenship Act, which was cleared by the Lok Sabha last week, makes non-Muslim migrants from Pakistan, Bangladesh and Afghanistan persons eligible for Indian citizenship. In that view of the matter, the SC observed that the PIL will become infructous if the Rajya Sabha clears the Citizenship (Amendment) Bill in the impending budget session.

Political analysts are questioning if Indian Prime Minister Narendra Modi would put the government of Bangladesh Prime Minister under tremendous pressure by pushing over four million Bangla-speaking Muslims into Bangladesh. Considering the existing warm relationship between Dhaka and Delhi and Prime Minister’s Sheikh Hasina’s praiseworthy efforts in eliminating anti-India separatist outfits from Bangladesh as well as giving India road and river corridor, Narendra Modi should not take such steps. But, he may do this for the sake of his own political gain, ignoring the fact; such steps would incite anti-India sentiment in Bangladesh, which will ultimately turn into a huge headache both to Narendra Modi and the ruling party in Bangladesh.

Surprising silence of the Bangladeshi authorities:

Despite the fact of Indian Prime Minister Narendra Modi’s determination in beginning the process of pushing over four million Bangla-speaking Muslims into Bangladesh, there is visibly absolute silence from the Bangladesh side. Possibly the ruling party in Bangladesh are confident, Prime Minister Modi will ultimately abandon this plan. But in reality, there is no sign and even scope for him in retreating from this dangerous agenda, as because if he steps back from this plan, his party will be the worst loser during the upcoming Lok Sabha elections.

Kazi Jamal Hassan is a rights activist in India.