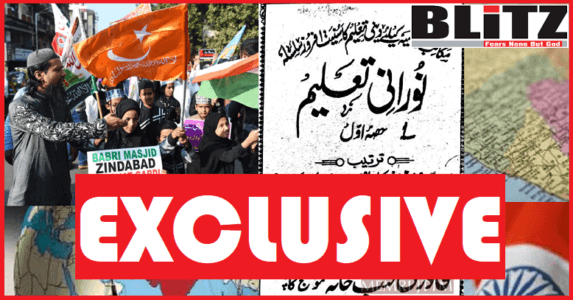 Radical Islam is gradually spreading in India. School textbooks of the children in the largest democracy and secular nation are promoting hatred towards Hindus, Christians and non-Muslims. It is a question as to how the Indian authorities are allowing such textbooks in its education system, which would instigate children in becoming jihadists.

According to information, PDF documents of a series of children’s Islamic schoolbooks that encourage intolerance against non-Muslims were recently shared on Telegram. The schoolbooks, titled Noorani Talim and released in Urdu and English in 1970, were written by Jalaluddin Ahmad Amjadi, an Islamic scholar from the madrassa Darul Uloom Baraon, located in the Basti district of Uttar Pradesh, a state in northern India.

The schoolbooks are available across Uttar Pradesh, in the cities of Kanpur and Mau, although not all madrassas use them. The books also say that they are available from “Qadri Kutubkhana,” which may be a publishing house. The schoolbooks, which reflect the views of the Barelvi school of Sunni Islam, are aimed at children in the early stages of their education and primarily focus on topics like piety, daily prayer, and Muslim daily life. The images recently disseminated on Telegram from a schoolbook designed to teach conversational English demonstrate the hostile attitude toward non-Muslims espoused in the text. This report includes excerpts from the schoolbooks, lightly edited for clarity and standardization.

The following are some questions and answers relating to non-Muslims from part 2 of Noorani Talim.

Q: What do you call someone who associates someone equal to or partner with Allah?

A: We call them Mushrik[polytheist] and Kafir [non-believer]

Q: What is wrong in being a Kafir or Mushrik?

A: Allah will always be unhappy with a Kafir or Mushrik and after death, they will remain in the fire or hell forever.

Q: Will Kafirs or Mushriks never go to paradise?

A: No, never, they will remain in hell for eternity.

Q: How is it known that Muhammad Sallallahu Alaihe Wasallam is the Prophet of Allah Ta’ala?

A: It is proven by the fact that our Holy Prophet called people towards Islam, he performed many miracles and he gave such knowledge of the unseen (Ilm-e-Ghaib) which can only be given by none other than a Prophet of Allah.

Q: What do you call a person who does not believe in Muhammad Mustapha Sallallahu Alaihe Wasallam as a Prophet?

A: He/She is a Kafir

Q: What if someone believes in Allah Ta’ala but does not believe in the Holy Prophet Muhammad Sallallahu Alaihe Wasallam?

A: The person is also a Kafir.

The following are some questions and answers from part 3 of Noorani Talim:

A: To disbelieve in any of the things that are compulsory to believe in Islam.

Q: Who was the last Prophet?

A: Hazrat Muhammad Mustafa (peace be on him).

Q: Are there going to be any Nabis [prophets] now?

A: There will be no Nabi now. This is because our Holy Prophet (peace be on him) is the seal of the prophets. If a person doubts this, then he is a Kafir.

Q: If a person prays Namaz [i.e., the five daily prayers in Islam], fasts, etc. and believes everything of Iman-Mufassal [complete faith] but is insulting and be rude to the Prophet (peace be on him). Is this person a Muslim?

A: No! Such a person is a Kafir and murtad [apostate].

A: No! This person too is a Kafir and murtad.

The following are some questions and answers from part 4 of Noorani Talim.

Q: What is the Islamic ruling of someone who speaks badly of Allah?

A: It is an act of Kufr [unbelief] to speak or think of Allah in this way.

Q: What is Jannat [heaven] made of?

A: The walls of Jannat are constructed from bricks made of gold and silver and are laid in alternate position i.e. one gold, one silver, one gold etc. The cement is made from sweet smelling musk and the stones are of pearls and diamonds.

Q: Can you explain other qualities of Jannat?

A: There are many qualities of Jannat which cannot even be explained, out of which here are some:

i) Jannat has oceans of water, milk and honey. The streams of these oceans will go up to the Jannatees[residents of paradise] houses and will be sweet smelling.

ii) The women of Jannat are so beautiful that is one was to be shown in this world, from the earth to the skies would be brightened. Their bangles are so shiny that the sun’s rays would disappear like the stars with the sun’s rays.

iii) When the Jannatees will eat and drink but they will not perform excretion or urine, they will also be clean from saliva and mucus. Their sweat will be sweet smelling. Their food will be completely digested.

v) If the Jannatees wanted to meet with each other they would straight away be presented in from of the guests. Their carriage would get to their destination straight away.

vii) The Jannatees from the lower grades will have Eighty Thousand servants and seventy-two wives.

A: Dozakh is a place made for Kafirs, wrong sects, and sinful Muslims and is made of fire.

Q: Is there any light in Hell?

A: No, Dozakh is completely dark.

Q: How hot is the fire of Dozakh?

A: The fire of Dozakh is seventy times hotter than fire in this world.

Q: How deep is Dozakh?

A: Only Allah knows how deep it is, but it is quoted in the Hadith Sharif that if a stone was thrown inside it after seventy years it would still not hit the bottom.

Q: What food and drink will be given to the Dozakhees [residents of hell]?

A: The puss that will come out of the Dozakhees will be given to them to drink and to eat they will be given a fruit with thorns which if a part of it comes into the world with its heat and bad smell the whole world would suffer. However, the Dozakhees will eat it without any choice and it will get stuck in their throats. To obtain relief from this they will ask for water and will be given boiling hot oil to drink, which after drinking their insides will burn out.

Q: Can you explain some other details of Dozakh?

i) There is fire in the hell is every direction and everything is made from fire of Dozakh is so strong that if a pin-point of it was thrown into this world everything would die with its heat. Also if one link from the chains of the Dozakhees was to be put on top of the mountain, the mountain would shake and the link would sink in.

ii) The face of the guard of Dozakh is so scary that if it was seen on earth all the people would die of fright.

iv) The last punishment given to the less sinful is that they will be shoes of fire to wear, which with the heat will boil the wearer’s brain and his head will blow open like a pan’s cover blows open.

Q: What is the order for those who do not believe in Jannat or Dozakh?

A: The one does not believe in Jannat or Dozakh is an Infidel (Kafir).”

The following are some questions and answers from part 5 of Noorani Talim.

Q: What is known as Gunaah-e-Kabira?

A: Extremely large sins are considered Gunaah-e-Kabira. The main ones include polytheism, infidelity, adultery, theft, alcohol consumption, telling lies, back-biting, telling tales, not praying Namaz, not fasting in the month of Ramadan, and not giving Zakat [alms].

Q: If one does not perform Gunaah-e-Kabira then will he not remain a Muslim?

A: Those who perform Shirk[polytheism] or Kufr does not remain a Muslim, he then becomes a Mushrik or Kafir. As for the rest of the Kabira Gunaahs [large sins] one does stay a Muslim if he commits these sins, a very disobedient Muslim is known as ‘Faasiq.’

Q: What is known as Shirk?

A: To partner or treat as equal something or someone with Allah or Allah’s characteristic is considered shirk.

Q: What is meant by to partner with something with Allah?

A: To Partner with Allah is to believe in more than one Allah, like the Christians have three Gods, this is the reason why they are Mushriks. The Hindu faith is associated with many gods, they are also defined as Mushriks.

A: To reject any fact of Zaruriyaat-e-Deen [compulsory beliefs or religion].