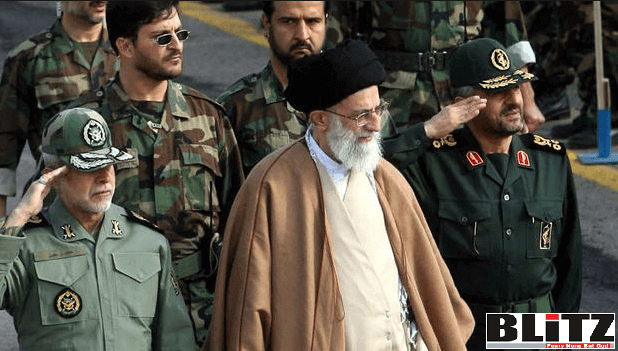 If the Iranians have their way and are able to control the level of the flames, they will make sure that tensions with the US fall short of war due to the massive disparity in military capability and lack of mutual vulnerability. A Hezbollah attack on Israel in such a scenario would lead to Hezbollah’s destruction, a result Tehran would prefer to avoid.

There has been much belligerent rhetoric and saber-rattling between the Islamic Republic of Iran and the US of late – for example, the announced arrival of a USAF aircraft carrier to the Gulf area. Many analysts are speculating what will happen if war breaks out between the two.

Not so fast. If the Iranians have their way, they will make sure that tensions fall far short of war.

The leaders of Iran are certainly belligerent toward their neighbors – they clearly harbor ambitions to dominate areas far beyond their borders, including Lebanon, Syria, Iraq, and Yemen – but they are not reckless.

Preying on their minds when they contemplate the cost of war with the US, the leading military power in the world by far, is Operation Praying Mantis, which the US Navy undertook against the navy of the Islamic Republic during the Iran-Iraq War in April 1988.

Retaliating against Iranian attacks intended to disrupt Gulf oil shipping, the US Navy – in a single day of battle – sank an Iranian frigate, damaged another, and sank a gunboat, three speedboats, and two moving platforms at a cost of 55 Iranian lives.  The US Navy’s losses totaled two crew members of a helicopter that malfunctioned on a reconnaissance mission and crashed into the sea.

Even more nightmarish for the Iranian leaders is what transpired in 2003 with the allied conquest (led overwhelmingly by US forces) of Iraq. The subsequent difficulties involved in staying in Iraq to rebuild the state have overshadowed one of the greatest military successes in the history of warfare.

The US military, with minor help from allies, conquered a state the size of Poland in less time than the German blitzkrieg of that country, at a cost of 157 lives (122 of them US military personnel). Thousands of losses had been envisioned.

The mullahs know only too well that their forces, by contrast, engaged the Iraqis in warfare for eight years without achieving any decisive results. It does not require complex reasoning to deduce the likely outcome of a war with the US.

They are also fully aware that because Iran as a state is so vulnerable, the US will scarcely need any forces on the ground to bring it to its knees.

Not only is Iran dependent on one type of export to foot government bills – oil and gas exports account for 40-60% of government revenue (depending on the fluctuating price of energy) – but over 80% of those energy exports are shipped out of a single island port, Khark, on the Iranian side of the Arab Gulf. It is reasonable to assume that the US is aiming cruise missiles at this three-square mile complex.

How effective will those missiles be?

The answer lies in the devastating effect left by 59 missiles launched from the USS Ross and USS Porter in the Mediterranean at the Shayrat military base in central Syria in April 2017 in retaliation for the regime’s use of chemical weapons.

Should single or successive attacks on Khark fail, the US can always strike at Iran’s second vulnerable nodal point: Bandar Abbas, the country’s biggest port on its southern coast.

To strike at Khark is to strike at Iran’s financial lifeline; to strike at Bandar Abbas is to strike at its imports. Nearly four-fifths of container imports of the country run through this port. These products are finished goods – cars, trucks, apparel, electronics. These imports make the difference between living in the 21st century and living in the 19th.  And again, there would be little chance of missing the target. Damage would be massive, if not total.

Perhaps Iran’s greatest weakness is its vulnerability relative to that of the US. While the US can devastate Iran, Iran can only punish the US’s allies, not the US itself. The few thousand US military personnel in Qatar and Bahrain are protected by Patriot missiles, and, one can assume, underground shelters.

Given the US’s bounty in terms of shale oil and gas, the ayatollahs do not hold the oil card, as the Shah once did. And the current US president, at least for a period of time, would likely be relatively insensitive to European concerns about rising energy prices. This is perhaps to be expected, as the European states were insensitive to Trump’s concerns about Iran.

In theory, Tehran could order Hezbollah to launch its massive arsenal against Israel. Once again, from the US’s perspective, the risk would be to Israeli and not American lives. But giving Hezbollah the green light would not be wise.

Ever since the war with Hezbollah in 2006, the Israeli establishment and (even more so) its military brass have been highly reluctant to engage in a full-scale ground offensive in Lebanon and possibly Syria.

This reluctance would dissipate in an instant, however, in a scenario involving Iranian belligerence against both the US and Israel. Israel would feel compelled to demonstrate its allegiance with and loyalty to its American ally. In such a situation, Israelis across the entire political spectrum would be willing to pay the human and economic price of a full-scale offensive against Hezbollah. The likely consequence would be the destruction of Iran’s staunchest non-state ally.

The mullahs are not foolish. They will avoid war at all costs, sticking instead to the proven strategy of acting through proxies to undermine Arab state order. This strategy will take time. Hopefully, the massive economic hardship caused by US sanctions will deny the regime the time it needs to achieve its goals.