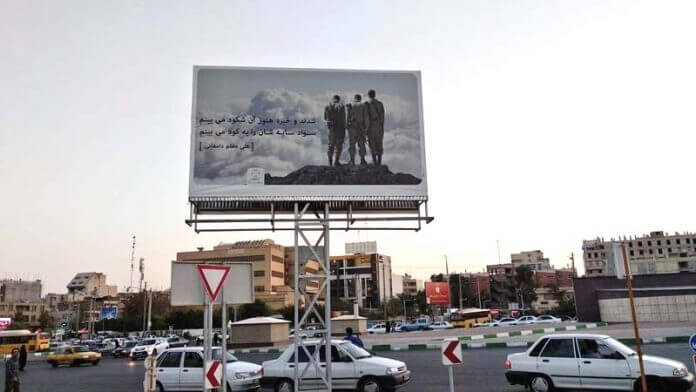 Iran’s Sacred Defense Week, commemorating the 1980-88 Iran-Iraq War, was the background to an embarrassing faux pas in Shiraz, Iran’s fifth-largest city, some 600 miles south of Tehran, where the city’s fathers erected a billboard featuring Iranian soldiers gazing at the horizon – but someone at the graphics department was probably working late to finish the assignment and used a stock image of IDF soldiers, gazing at an Israeli hill in the horizon. Mossad has already revealed the fact by posting the original photograph on its Twitter.

The earliest source for the discovery of the embarrassing billboard (heads will literally roll) we found was a tweet dated Wednesday at 1:38 PM, by Unofficial: The Mossad IL, a humorous Twitter and Facebook outlet which informs visitors: “World famous spy agency and probably responsible for that lousy thing that happened to you today.” Also, responsible pranksters that they are, their Facebook page also suggests: “If you really need to contact The Mossad go to the official website. People come to our Facebook page to have a good time.”

The Mossad IL folks recognized the IDF soldiers in downtown Shiraz, and posted the original stock image, which, by the way, included a female soldier the Iranian graphics guy omitted from his version, and declared: “Mission complete. Billboard in Shiraz, Iran, a Tribute to Martyrs, pictured IDF soldiers. Way to go Shiraz!”

Later tweets, presumably from Iran, reported that the fathers of the city of Shiraz took down the billboard.

The Russian propaganda outlet Sputnik, which reported the incident early Thursday, noted that the IDF billboard was put up on the same week armed al-Ahvaziya terrorists, possibly funded by Saudi Arabia, attacked a parade of the Iranian Revolutionary Guard Corps (IRGC) in the regional capital of Ahwaz during a commemoration of the Iran-Iraq war, killing 25 and wounding 53.