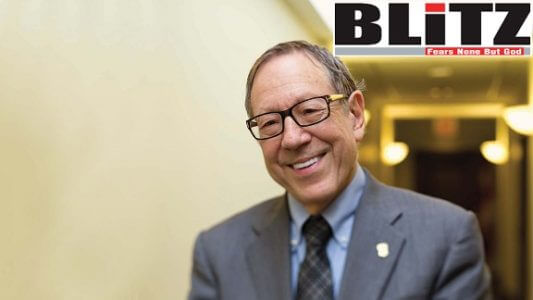 Described as “a Champion of Human Rights” by those in attendance, the Raoul Wallenberg Centre for Human Rights (RWCHR) Chair Dr. Irwin Cotler was awarded the prestigious Heintz Memorial Award for Humanitarian Achievement by a gathering of the world’s leading international lawyers.

The Award recognized Cotler as “a compassionate visionary dedicated to the pursuit of justice who leaves a legacy in International Humanitarian Law.” Past recipients include Nuremberg Trials Prosecutor Benjamin Ferencz, human rights campaigner Sergei Magnitsky, and United Nations High Commissioner for Human Rights Zeid Ra’ad al-Hussein, among other luminaries.

Presented at the International Humanitarian Law Dialogues, the event brought together the founding Prosecutors and Presidents of the world’s International Tribunals and Courts, along with other top international legal experts. The historic gathering was organized in partnership with the Robert H. Jackson Center, named after the U.S. Supreme Court Justice who served as Chief Prosecutor at the Nuremberg Trials of Nazi War Criminals.

In the words of the Jackson Center, “Cotler has been a long-time champion of human rights and supporter of modern international criminal law. As Minister of Justice for Canada, he made the pursuit of international justice a government priority. As an international human rights lawyer, he served as counsel to numerous prisoners of conscience, including Nelson Mandela and Salah Uddin Shoaib Choudhury. His continued work in founding the Raoul Wallenberg Centre places him at the center of human rights advocacy.”

The EU Reporter has called the Heintz Award “one of the world’s most prestigious individual achievement prizes”.

The RWCHR pursues justice by mobilizing advocacy and advising foreign policy in Canada and around the world. The first Raoul Wallenberg All-Party Parliamentary Caucus for Human Rights was launched in Canada in 2017.

The RWCHR was founded by renowned international human rights lawyer and former Canadian Minister of Justice Irwin Cotler in 2015.

The RWCHR’s mission is to mobilize a “unique international consortium” of academics, activists, lawyers, jurists, Parliamentarians, NGOs, citizens and students in the pursuit of justice. The RWCHR’s mission statement is organized around five themes, each of which reflects Raoul Wallenberg’s humanitarian legacy. Each theme is co-chaired by a leading jurist/parliamentarian/advocate/citizen in the country of Wallenberg’s Honorary Citizenship. The Honorary Co-Chairs are Elie Wiesel (US – in memoriam), the Honourable Justice Rosalie Abella (Canada), the Honourable Meir Shamgar (Israel) and the Honourable Göran Persson (Sweden). All of the RWCHR’s activity relates to one or more of the below themes.

Editorial board of Blitz congratulates Dr. Cotler for receiving this prestigious award and with profound gratitude acknowledges his precious contributions as the international attorney for this newspaper’s editor and internationally acclaimed anti-militancy journalist Salah Uddin Shoaib Choudhury.