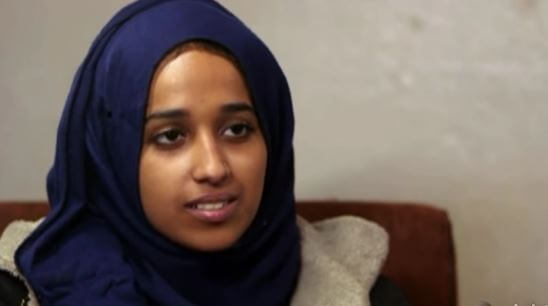 Lawyers and supporters of the woman dubbed the American “ISIS bride” portray her as a misguided, “brainwashed” girl who simply made a mistake. In fact, she was an ISIS propagandist and strategist whose innovative ideas proved to be operationally effective.

Much of Hoda Muthana’s online activity disappeared when her accounts were suspended, along with some 125,000 others shut down between mid-2015 and February 2016. But the tweets that have survived reveal far more than just some harmless cheerleading for the Islamic State.

Most of the media have focused on the sensational story of a young girl born in Alabama who left home to join the Syrian jihad. Interest in her Twitter activity has focused on the image where she and three other ISIS brides show their soon-to-be-burnt passports and her observation that “Soooo many Aussies and Brits here. But where are the Americans, wake up u cowards.” But like her urging fellow Muslims to “Terrorize the kuffar at home,” this is pretty much standard ISIS propaganda, nothing special or innovative.

After her first husband, Suhan Abdul Rahman, was killed in March 2015, Muthana’s tweets changed. The day after she announced that he had “fought in the front lines until he attained shahadah,” she revealed an innovative, strategic side. Her call for jihadis to ” take down” then-President Barack Obama with the advice to “look up Obama’s schedule on the white house website” was followed by the most significant of Muthana’s archived tweets, whose text ran as follows:

This March 19, 2015 tweet was prescient. The media seems obsessed with the shock value of a 20-year-old American girl urging her fellow Muslims to “drive all over” the infidels, but far more significant are its operational directions predating, arguably precipitating, the evolution of “truck jihad.”

Prior to Muthana’s advice, jihadis had used vehicles to drive into people, but with underwhelming results. Coincidentally or not, after her tweet, the effectiveness and frequency of the tactic increased dramatically.

Vehicular jihad began in 2006 when Mohammad Reza Taheri-azar drove a rented Jeep Grand Cherokee onto a pedestrian area at the University of North Carolina at Chapel Hill, injuring 9 people. Taheri-azar later confessed that he chose a four-wheel drive vehicle thinking it would enable him to “run over things and keep going.”

Four years later, the second issue of the Al-Qaeda online magazine Inspire contained an article titled “The Ultimate Mowing Machine,” that advised jihadists to “use a pickup truck as a mowing machine, not to mow grass but mow down the enemies of Allah.”

The plan began with “a 4WD pickup truck,” and then got bizarre by directing readers to “weld on steel blades on the front end of the truck … a set of butcher blades or thick sheets of steel. They do not need to be extra sharp because with the speed of the truck at the time of impact, even a blunter edge would slice through bone very easily. You may raise the level of the blades as high as the headlights.”

This onerous, overly complicated plan was thankfully never put into action and vehicle attacks subsided for several years, at least until Muthana resurrected the tactic with a far more practical plan of using a large, unmodified truck to target parades and festivals.

Over a year after Muthana’s tweet, the parameters of truck jihad were regularized in November 2016 in the online ISIS magazine Rumiyah, Issue #3. An article titled “Just Terror Tactics,” follows Muthana’s lead in both type of vehicle and targets. It cautions against SUVs and in favor of larger, heavier, load-bearing trucks. It recommended attacking people at large outdoor celebrations, exactly as Muthana had advised.

Absent of forensic analysis of all her online activity, it is difficult to determine whether Muthana was in fact the originator of this deadly adjustment to an earlier, less successful tactic, or merely in a position to overhear and repeat a new strategy.

One thing is certain though: Muthana disseminated operational advice intended for terrorists, and what she advised was later carried out, culminating in the injury and deaths of hundreds of innocents in truck attacks in France, Germany, Sweden, many in England, Spain, Canada, and New York.

A.J. Caschetta is a Ginsburg-Ingerman fellow at the Middle East Forum and a principal lecturer at the Rochester Institute of Technology.