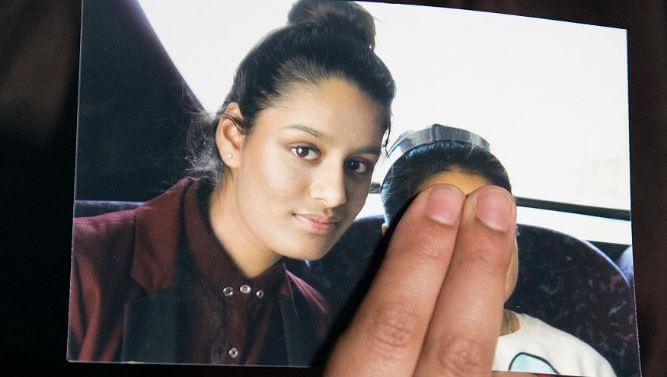 The 19-year-old British national Shamima Begum, who went to Syria and joined Islamic State (ISIS) will face death penalty as a terrorist if she ever wants to return to Bangladesh. Shahima, like many other ISIS brides is under monthly payroll of an ISIS funder named Md. Shahid Uddin Khan, who is living in the United Kingdom along with his wife Farjana Anjum and three daughters. Khans also are bearing the legal expenses of the ISIS brides.

Talking to the British Broadcasting Corporation (BBC), Bangladesh foreign minister AK Abdul Momen said, the 19-year-old girl – who fled Bethnal Green area in UK capital London for Syria and is currently living in the al-Hol desert refugee camp in Syria – would be punished severely as the country has a “zero tolerance” for terrorism.

Shamima Begum was one of three schoolgirls to leave Bethnal Green to join the terror outfit in 2015 and resurfaced at a Syrian refugee camp in March.

According to British newspapers, ISIS bride Shamima was a much more willing activist for Islamic State than previously believed. Sunday Telegraph said, she carried a Kalashnikov rifle and had a record of being a strict enforcer of sharia laws, including dress codes.

The Bethnal Green schoolgirl tried to recruit younger women to join the jihadist group, according to reports.

Shamima had previously insisted she was never involved in the terror group’s brutality and said she spent her time simply as a housewife, after fleeing London when she was just 15.

She further said, her interests were on caring for her children, who have since died, and her Dutch national husband, Yago Riedijk.

Shamima is said to have graduated to a level where she was a member of an all-female “police squad”. For her service to ISIS, Shamima was receiving US$ 700-1200 per month as salary.

She was active in recruiting other women to join ISIS from across Europe, including texting a teen from Austria in 2015. She told one girl: “Don’t believe any of the bad things you hear about Dawla [the State], it’s fake. You have everything you want here and we can help find you a good-looking husband.”

When the British authorities are showing no sign of sympathy towards the ISIS bride, it is a matter of grave surprise as to how they are still reluctant in taking action against Shahid Uddin Khan, his wife Farjana Anjum and daughters Shehtaz M Khan, Pinas M Khan and Parisa Pinaz Khan. Khan’s daughters, under the disguise of sex workers are actively involved in luring other females towards jihadist activities.

Shahid Uddin Khan, his wife Farjana Anjum and daughters have obtained immigrant status in Britain under Visa Tier 1, Vide VAF Number 511702. According to the existing immigration rules of the United Kingdom, anyone willing to obtain immigration under the investor’s category are required to invest at least One Million Pound in any business venture. The entire amounts Khans have invested were smuggled out from Bangladesh and the same amount had entered United Kingdom through illegal channel.

Working on secret information, the Counter Terrorism and Transnational Crime (CTTC) unit of Bangladesh Police raided House No. 184, Road No. 2, Baridhara DOHS in Dhaka, Bangladesh on January 17, 2019. This house owned by Col (sacked) Shahid Uddin Khan was used as a warehouse of arms, explosives and propaganda materials of Islamic State (ISIS). During the raid, large volume of weapons, detonator, counterfeit Bangladesh currency notes and jihadist materials of ISIS were recovered by the CTTC unit. Col (sacked) now resides in the United Kingdom along with his wife Farjana Anjum and three daughters. Later Counter Terrorism and Transnational Crime unit of Bangladesh Police on January 17, 2019 has lodged three separate cases against ISIS-funder Colonel (sacked) Shahid Uddin Khan and his accomplices. Those cases are: Cantonment PS, Case no 10, Section-6(2)/7/11/12 of Anti Terrorism Act 2009 (amendment 2013); Cantonment PS,  Case no 11, Section-25-A,  Special Power Act 1974; and Cantonment PS, Case no 12, Section-19-A of Arms Act 1878.

There also are several criminal cases pending against Shahid Uddin Khan, his wife Farzana Anjum and their daughters in Bangladesh. Member

According to media reports, Khans had funded the Easter Sunday suicide attacks in Sri Lanka.

An official of the National Crime Agency (NCA) in Britain said, they are going to initiate an investigation into the specific allegations of money laundering by Md. Shahid Uddin Khan his wife Farjana Anjum and daughters Shehtaz M Khan, Pinas M Khan and Parisa Pinaz Khan.

While Qatar already is known as a terror-patron nation, its controversial TV channel Al Jazeera has already stood in support of ISIS-funder Shahid Uddin Khan. Recently this channel has published a propaganda material filled with lies and false information. A shrewd Shahid Uddin Khan has prepared few documents and made false claims of three of his cohorts being “abducted” by the law enforcing agencies. In reality, three of these men had gone into hiding at the instruction of Shahid Uddin Khan with the ulterior agenda of defaming Bangladeshi law enforcing agencies. Following publication of this propaganda material in Al Jazeera, Shahid Uddin Khan along with some of his associated in Britain are making frantic bids in getting the same published in other news platforms in UK as well as in some other countries. Some individuals already are hired by this notorious man for running the propaganda.

Jihadist girls on the social media: