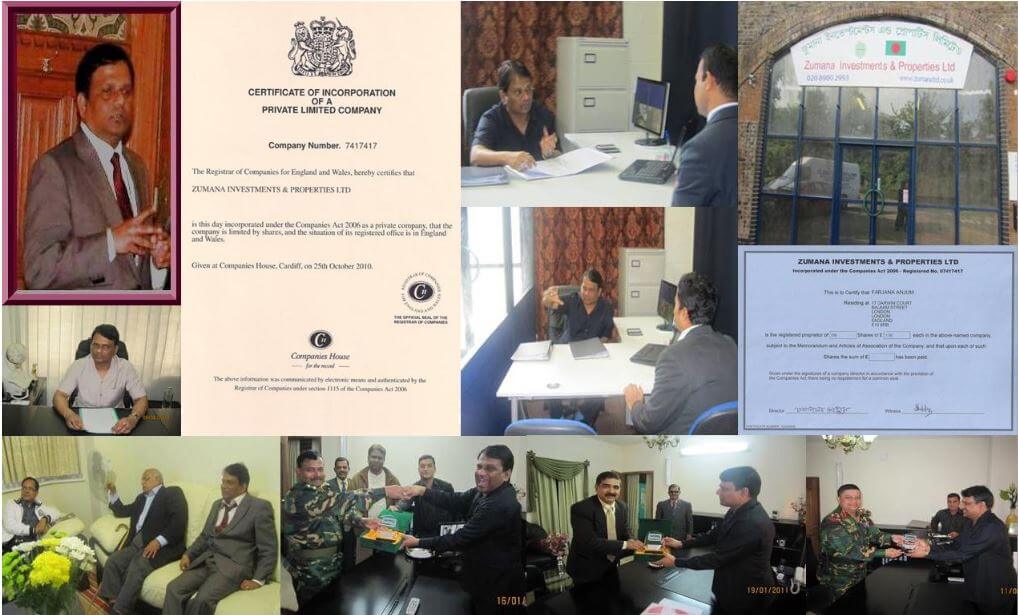 For years, the second floor of House No. 184, Road No. 2, Baridhara DOHS in Dhaka was being used as an warehouse of storing explosives, weapons and propaganda materials of ISIS by its owner Shahid Uddin Khan. It also said, Khan is one of the top funders of ISIS, who fled Bangladesh few months back along with his wife Farjana Anjum and three daughters.

Col (sacked) Shahid Uddin Khan was sacked from the army 15 years back on specific allegation of corruption and money laundering.

Until busting of this huge ISIS warehouse in Bangladesh Col (sacked) Shahid Uddin Khan was known as a fraud who had cheated lots of people in the country by selling properties with false documents and had smuggled-out millions of dollars to the United Kingdom and to his hidden offshore bank accounts in some other countries.

Earlier, another report also was published in Blitz about this sacked army officer.

According to information, Col (sacked) Shahid Uddin Khan’s wife Farjana Anjum also is affiliated with ISIS. Sitting in Britain, this couple now is now only funding ISIS but also is recruiting members for this jihadist outfit.

In Bangladesh, Shahid Uddin Khan’s top accomplice of his fraudulent activities is a vendor of non judicial stamp named Nazrul. But the key associate of Shahid Uddin Khan is Pakistani ISI agent Sajjad Hussain. According to information, Sajjad has been regularly shuttling in between Bangladesh and United States.

Indian newspaper The Eastern Herald on January 15, 2019 published an exclusive report exposing activities of Sajjad Hussain. The newspaper said, “In Bangladesh, Sajjad Hossain was living a posh life although he does not have any valid source of earnings. His son, Asif Sajjad was a student of North South University, where he also was affiliated with militancy outfit named Hizb-Ut-Tahrir. Sajjad Hossain never hesitated in telling few of his friends in Dhaka of his connections with Pakistani espionage agency Inter-Service Intelligence (ISI).”

In Bangladesh, Shahid Uddin Khan maintains a huge gang of forgers which also include several lawyers who play key role in preparing forged documents of various properties and land thus helping this notorious man in giving legal aid to several militants as well as in cheating locals by selling these properties with forged documents. Non judicial stamp vendor Nazrul Islam (mobile number 01798501227) is one of the members of this racket.

Since the January 19 raid, CTTC and other intelligence agencies in Bangladesh already are looking for accomplices of Shahid Uddin Khan. Photographs of this man and his wife will be put into websites of Bangladesh Police, CTTC and Rapid Action Battalion (RAB) as the couple already is amongst the ‘Most Wanted’ criminals. Bangladesh may also send requests to United Kingdom and Interpol in this regard.

Hearing the news about raid at Col (sacked) Shahid Uddin Khan’s house in Dhaka, Shahid and his top accomplice Sajjad Hussain are contacting several people, including some senior army and police officials.

Who is Brig Gen ASM Bhuiyan?

According to investigation, a dubious write up by Brig Gen ASM Bhuiyan was found by the team of this newspaper. This write up on a blogpost was posted on March 9, 2014. In this write up, extreme derogatory remarks have been made against some patriotic and brilliant officers of the Bangladesh Armed Forces. After reading the entire text, it is clearly understood; this content might even have been created and uploaded by Shahid Uddin Khan himself. In this post, Brig Gen ASM Bhuiyan has made extremely derogatory comments about a number of senior officials of the Bangladesh Armed Forces.

In the UK, Shahid Uddin Khan is running several businesses which were established with the dirty money he had smuggled out from Bangladesh. But this ISIS funder is trying to hide his real face from the Britons by maintaining several blogs as well as posting his self-made profile in a number of websites. One of such profiles was detected at  online.anyflip.com site, where Shahid Uddin Khan proclaims himself to be an “honest” individual.

Col (sacked) Shahid Uddin Khan smuggled out millions of dollars from Bangladesh to various countries including United Kingdom. In 2009, he invested one million Pounds in the United Kingdom in exchange of obtaining immigrant status under visa Tier 1, vide VAF No. 511702. The investment was made in the name of Shahid’s wife Farjana Anjum.

When inquired, sources in the foreign exchange control department of the Bangladesh Bank told Blitz that Lt Col (sacked) Shahid Uddin Khan or his wife Farjana Anjum did not take any permission from the central bank for the above mentioned transfer of UK Pound one million. It said, such illegal transfer of significant amount of money is a punishable crime under the Money Laundering Act.

It said, “They [British authorities] always express concern about suspicious transactions through banking channels in most of the nations, while they themselves welcomed such un-declared illegal money into their own country. This is just double standard. British authorities must immediately investigate Shahid Uddin Khan, Farjana Anjum and children of this couple and remove their immigration status and send them back to Bangladesh.”

Clearly knowing of his dubious background, British authorities not only had accepted huge sum of dirty money of Col (sacked) Shahid Uddin Khan, but they also are giving shelter to this dangerous criminal along with his wife and three daughters. Following January 18, 2019 raid at his residence, which was used as a warehouse of ISIS, authorities in London need to immediately send this terror-linked family back to Bangladesh.