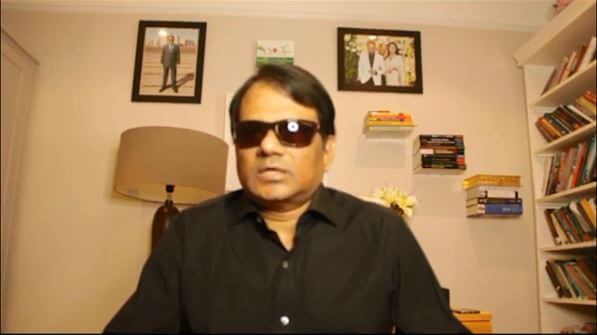 Sitting in London, Islamic State funder and fugitive criminal Md. Shahid Uddin Khan issued two statements in Bangla and English on the video sharing site copying the video messages of Islamic State. In the messages, Md. Shahid Uddin Khan is seen wearing black dress (a dress worn by ISIS members) and on purpose he has used dark glasses to hide his eyes.

In the video, Md. Shahid Uddin Khan once again has called upon the supporters of Astha (faith) an ISIS-prototype outfit floated by him to unseat the democratically elected government in Bangladesh with the ulterior agenda of establishing Caliphate. Counter-militancy experts are seeing these videos similar to those videos released by Islamic State and Al Qaeda.

Md. Shahid Uddin Khan (Army No: BA002428, Course: 8-BMA, Commission Date: 10-06-1983) and his wife and daughter currently are continuing activities sitting in United Kingdom. On January 17, 2019, Dhaka residence of Md. Shahid Uddin Khan was raided by the members of the Counter Terrorism and Transnational Crime (CTTC) unit of Bangladesh Police.

Ever since his identity as a patron and funder of ISIS had been exposed following the raid at his Dhaka residence, Md. Shahid Uddin Khan has been consistently conspiring against Bangladesh.

From the video messages it was made clear that Md. Shahid Uddin Khan was already having a plot of terrorist attacks during the first week of April. As part of this conspiracy, Shahid Khan had funded the recent jihadist attacks in Sri Lanka.

Sri Lanka was alerted of the jihadist attacks:

Trashing the allegation of failure, sources inside Sri Lankan intelligence agencies claimed, on the basis of the security alert of the Middle East based intelligence source, they already have brought the matter to the attention of country’s Prime Minister. But it was Sri Lankan politicians who had on purpose ignored the matter thus leading to the series of jihadist attacks on churches and high-end hotels.

The discovery in the town of Sammanthurai, around 210 km (130 miles) east of the capital Colombo, came as security forces continued to search for extremists responsible for the bombings.

Seven people were reportedly arrested in the raid that was conducted by police and army personnel.

Police found an ISIS flag which they said was used as a backdrop, as well as clothing similar to that worn by the eight people in the video recorded before they launched suicide bomb attacks against three luxury hotels and three churches within 20 minutes of each other on Sunday. Two blasts at a guesthouse and a house in came later in the day.

ISIS released the video via its Amaq propaganda agency two days after the attacks.

Sammanthurai is around 40 km south of Batticaloa, where at least 25 people were killed in a suicide bombing at the Zion church.

Police showed the clothing and the flag on national television along with around 150 sticks of gelignite, 100,000 ball bearings, and a quadcopter drone. Video appeared to show a stack of 50 kg fertiliser sacks, around a dozen large drums of liquid and a box of battery power units among other items seized.

On Monday, police said they had found 87 detonators – 12 of them scattered on the ground at the Bastian Mawatha Private bus stand in Colombo and another 75 in a nearby garbage dump.

Meanwhile, there were reports of explosions on Friday in Kalmunai, around 5 km from Sammanthurai.

Troops and a small group of militants exchanged fire for over an hour, military spokesperson Brigadier Sumith Atapattu said, adding that there were no fatalities among troops, but the area was still not cleared.

Two gunmen were reportedly killed in the shootout, while one civilian died and three were injured.

And in Colombo, Navy personnel arrested three people and recovered one kilo of C-4 explosives near Wellawetta railway station.

President Maithripala Sirisena said Zahran Hashim, the leader of a local jihadist group named National Thowheed Jamath (NTJ), was one of two attackers killed at one of the Colombo hotels hit on Sunday.

“What intelligence agencies have told me is that Zahran was killed during the Shangri-La attack,” he said.

Hashim was accompanied by a second bomber identified as Ilham Ibrahim in the attack, the president said.

Ilham and his brother Inshaf Ahmed Ibrahim attacked the Shangri-La and Cinnamon Grand hotels and Inshaf Ibrahim’s wife Fatima was killed in an explosion the family home on Sunday, Firstpost reported.

An intelligence source told The Times that Abdul Lathief Jameel Mohamed is believed to have targeted the Taj Samudra hotel – located between the Shangri-La and the Cinnamon Grand – but his suicide vest failed to detonate. He later detonated the device at a guesthouse near the zoo.

Authorities had been searching for Hashim after naming his little-known group, National Thowheeth Jama’ath, as perpetrators of the attack.

DNA tests are being carried out on a severed head to conclusively establish that it is of Hashim’s, officials said, adding they believe the tests will prove positive.

Hashim was the only person whose face was not covered in the video released by ISIS site Amaq after it claimed the attacks.

Is Sirisena cashing the jihadist attacks?

Sirisena had called on both to leave their posts because of the recriminations over the government’s failure to prevent the attacks despite the warnings from India that NTJ suicide bombers were likely to hit “prominent churches.”

“We take collective responsibility and apologise to our fellow citizens for our failure to protect victims of these tragic events,” Wickremesinghe tweeted.

The military poured troops onto the streets to bolster police in the search for suspects using newly granted powers under a state of emergency.

At least 74 people are in custody, including a man believed to be millionaire spice-trader Mohammed Yusuf Ibrahim, the father of two of the bombers.

“We now have info that there are about 140 people in Sri Lanka linked to the Islamic State, we can and we will eradicate all of them very soon,” Sirisena said, announcing that there would also be new legislation to ban extremist groups.

On Thursday, authorities reduced the death toll from 360 dead to 253, saying that badly mutilated bodies had been double counted.

Critics of President Maithripala Sirisena are saying, the controversial President is trying to cash the jihadist attacks in ousting few of his foes within the Defence Ministry, security agencies and police.

As part of ISIS agenda of spreading its network within South Asian nations and nefarious agenda of establishing Caliphate, Md. Shahid Uddin Khan is reportedly plotting a number of jihadist attacks in India, Nepal and Bangladesh. In Bangladesh, this ISIS funder is looking for July 2017 Holey Artisal Bakery proto-type attacks in Dhaka’s upscale hotels or restaurants which attract foreigners. Being instructed by Md. Shahid Uddin Khan, his cohort M. Sajjad Hussain has been coordinating such attacks. Sajjad currently lives in the United States along with his wife and son.