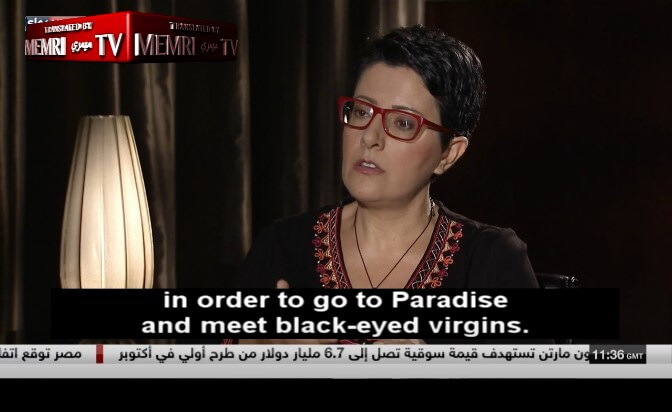 Dr. Rita Faraj, a Lebanese sociologist and author, was interviewed on Abu Dhabi’s Sky News Arabia TV. Faraj criticized extremist Islamist groups for embracing religious discourse that calls people to violence and martyrdom against the “other.” She said that these groups develop out of crises, poverty, and ignorance of culture, religion and history. Faraj also predicted that the world is heading toward more violent extremism that is even worse than ISIS, and she said that the Arab form of Islam is susceptible to these ideologies because it does not resolve its crises. She stated that Islam is “undergoing a strong clash with modernity,” and that governments should undertake serious and far-reaching reform. She suggested that the best way to start is by “filtering our heritage,” injecting rationality into the religious rhetoric, and monitoring the religious and educational curricula to establish a tolerant and open religious culture.

Dr. Faraj also said that hijab has been used by Islamic movements who do not see women as anything other than mindless agents of fitna (“temptation”), and she said that the “hijab of the mind” that the Arab world is exposed to is more dangerous than the physical hijab. She added that the Arab world is suffering from a great crisis relating to the culture of sexuality and that extremist groups like ISIS use sexual motivations to attract young people. Dr. Faraj is a sociologist at the Al-Mesbar Studies & Research Centre in Dubai, and she is a member of Al-Mesbar’s editorial board. She holds a PhD in Islamic Studies and an MA in Sociology of Knowledge. The interview aired on September 21, 2018.

“Islam Is Undergoing A Strong Clash With Modernity”

Interviewer: “When a young man comes from anywhere in the Islamic world, and is incited or spurred on to carry out a suicide operation, which is called a ‘martyrdom’ operation, he has a religious motivation. He is committing suicide because this is ‘Jihad,’ a war against the enemies of the Islamic nation, and therefore, if he dies, he will go to Paradise. Isn’t this religious discourse?”

Dr. Rita Faraj: “Yes, it is. It is religious discourse, which incites violence, killing, and martyrdom, under the labels of ideology and takfir. We have recently witnessed a rise in this phenomenon, especially after the explosion of Jihadi violence in Syria and Iraq, which is manifest in ISIS. But we must realize – if we want to learn the true dimensions of the problem – that there is also a large reservoir of violence that these takfirigroups tap into. These groups embrace discourse that is violent toward the ‘other,’ toward the Muslims themselves, toward anyone who is different.

This religious discourse also develops out of crises, poverty, ignorance, and cultural illiteracy. I’d like to draw a distinction between the inability to read or write and cultural illiteracy. Many people today are educated, and have certificates to prove it, but are culturally illiterate in the sense that they are ignorant when it comes to their religion, their culture, and their past.

“I believe that we are heading toward even more violent and vicious extremism.”

Interviewer: “Even after our bitter experience with ISIS?”

Dr. Rita Faraj: “Yes. We have seen movements that were even more violent than ISIS.”

Interviewer: “Why is that, in your opinion?”

Dr. Rita Faraj: “Because we are susceptible to it, and we do not resolve the crises that afflict us, including the social crises, and because there is great fear regarding the building of the state. The great question facing the Arab world today, especially after the civil war in Syria and the wars in Iraq, is how to rebuild the country.

“Arab Islam is among the forms of Islam that face the most severe crises. It shuts itself in a cocoon.”

Interviewer: “Has this affected other forms of Islam?”

Dr. Rita Faraj: “Perhaps in terms of violence. Yes. But in general, Islam is undergoing a strong clash with modernity. It is as if it is facing two streams – one wants Islam to return to the past, and the other is trying to make Islam progress to the future and to modernity. If we do not conduct a true reform in our religious institutions and in our educational curricula, especially our religious education, in which we are dealing with a great crisis in terms of the way we portray the ‘other’… [Without this,] we cannot conduct any true reform. In my view, the basic achievement of any institution and any government is to undertake serious, real, and far-reaching reform of the religious education.”

“How Are We To Begin This Reform?…” “By Filtering Out The Violence, By Injecting Rationality Into The Rhetoric Of The Imams, By Monitoring The Curricula, And By Establishing A Tolerant Religious Culture”

Interviewer: “How are we to begin this reform?”

Dr. Rita Faraj: “First of all, by filtering our heritage…”

Interviewer: “By re-reading the books of heritage…”

Dr. Rita Faraj: “By filtering out the violence, by injecting rationality into the rhetoric of the imams, by monitoring the curricula, and by establishing a tolerant religious culture that is open to the world.

“True, the [hijab] is a cultural, religious, and social symbol…”

Interviewer: “But I am talking about another hijab – the politicized hijab.”

Dr. Rita Faraj: “This is the kind of hijab urged by the Islamic movements. They do not see the woman as more than her body or as more than an agent of fitna. They never present women as having their own mind. We have the hijab made of cloth, and we have the hijab of the mind, which is the more dangerous one and to which we are exposed in the Arab world.”

Interviewer: “There is no basis in the Quran to the notion of 70 black-eyed virgins [in Paradise], and so on.”

Dr. Rita Faraj: “Correct. This is all residue from the past and exploitation of the religious text, or of some of the legal interpretations. They are exploited for political goals.”

Interviewer: “In order to attract young people into extremist movements…”

Dr. Rita Faraj: “That’s right. We suffer from a great crisis relating to the culture of sexuality in the Arab world, from sexual oppression, and from the way the youth are exploited…”

Interviewer: “Do you think this is one of the reasons for the attractiveness of extremist groups?”

Dr. Rita Faraj: “Without a doubt. They use sexual motivation to attract young people. As you know, some of the videos distributed in recent years, especially by ISIS… We could never imagine that somebody, even with limited mental capacities, would consider killing himself, in order to go to Paradise and meet black-eyed virgins.”