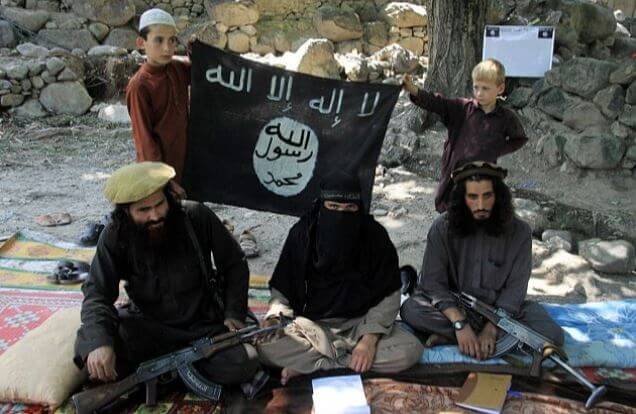 Islamic State in Khorasan (IS-K) emerged in Nangarhar province in eastern Afghanistan, on the border of Pakistan’s volatile tribal region. While IS-K’s terror tactics forced local communities to submit to the group, many people, particularly the young, were lured by the group’s promise of “Islamic social justice” and a potentially steady stream of cash flow from the Middle East-based “Caliphate.”

Banking on this promise, IS-K not only seized several remote districts in Nangahar, but infiltrated urban centers targeting educational institutions. It has gradually expanded its presence into the less secure parts of the comparatively peaceful northern region.

A significant help to IS-K as it expanded its operations from the east to parts of the north was weaker state authority.  IS-K, like the Taliban, can easily exploit the internal weaknesses of the US-backed government in Kabul.

Although operations by Afghani and international forces and rival militant groups (the Taliban in this case) have considerably weakened IS-K, it is far from wiped out. The devastating attacks on Afghani civilians in Kabul in the past few months prove that it is alive and kicking.

Not only has the central government failed to cope with the Taliban threat, but the presence of warlords, jihadist militia leaders, and powerful men poses a direct challenge to its authority.

Weak authority is causing Afghans to lose faith in the state, a collapse of trust that pushes them towards militant non-state actors touting promises of social justice and rewards after death. The stories of Taliban justice, despite its brutality, are often repeated as a contrast to government corruption and as a remedy for social disparity or insecurity.

Warlords and strongmen who challenge the writ of the state wear away people’s trust in the state’s authority. A few months ago, the powerful governor of Balkh province challenged President Ashraf Ghani and defied his orders to step down. More recently, a few powerful men locked the offices of the election commission after their disqualification from the October 20 parliamentary elections.

Although unemployment and corruption are very common issues facing governments in backward countries, Afghanistan suffers the most from these problems because the Afghani population is disproportionately young.

According to 2014 figures from the Afghan Central Statistics Organization, almost 84% of the Afghanistan population is younger than 40. Youth under 15 make up almost 47%, while those between 15 and 39 make up 37%.

Unemployed youth are the most vulnerable segment of the society. They fall prey to IS-K propaganda that criticizes injustice and government corruption and promises a better future. The widening social status gap coupled with unemployment and insecurity has increased frustration within impoverished communities that are then more willing to internalize IS-K and Taliban propaganda.

The majority of those joining IS-K are unemployed youth, both the educated and the illiterate. While the uneducated join the militant group for religious reasons and prospects for a better life after death, the educated enter its ranks to express their anger over the lack of social justice, lack of jobs, and lack of action against corrupt officials and mafia lords.

The nearly four decades of war have weakened the fabric of Afghan society. The divisions were very much visible during the April 2014 presidential election pitting President Ashraf Ghani, who came forward as the representative of the majority Pashtuns, against Dr. Abdullah Abdullah, who was supported by mostly the ethnic Tajiks.

Despite their being partners in the National United Government, Ghani and Abdullah are believed to remain at odds. Their offices promote members of their respective communities, the Pashtuns and the Tajiks. This animosity affects the efficiency of the government and the authority of the state.

While Afghanistan has remained mostly unaffected by sectarian divisions, recent attacks claimed by IS-K on Shiite places of worship and cultural centers seem to be a deliberate effort to deepen sectarian divisions and incite violence in Afghanistan. This would conform to the strategy used by IS in Iraq and Syria.

IS-K has failed (so far) to spark Shiite-Sunni armed rivalry in Afghanistan, and the ethnic conflict does not expand beyond politics. But continuation of ethnic and sectarian differences bolsters support for militant groups like IS-K.

Since the era of anti-Soviet jihad, Afghanistan has been a playing field for foreigners, particularly the country’s stronger neighbors. Those neighbors not only meddle in Afghanistan to secure their economic, strategic, and national interests, but also to outsmart their opponents.

There were times when Iran took sides with the then Northern Alliance against the Taliban. Pakistan is still supporting the Taliban, not only to keep tabs on anti-Pakistan Afghani nationalists but also to keep arch rival India away from its western border. India earlier supported the Tajik-led Northern Alliance against the Taliban.Foreign meddling has fueled the insurgency and insecurity in Afghanistan. Its continuation may help newly emerged groups such as the IS-K to find safe haven in the comparatively unstable and insecure parts of the country.

Afghanistan’s two powerful neighbors, Pakistan and India, are struggling to outclass each other on Afghan. While Afghan authorities point accusing fingers at Pakistan’s intelligence agencies for supporting the Taliban and Haqqani Network, Pakistani officials are anxious about rising Indian influence in Afghanistan, which they perceive as an encirclement of their country.

The net result is a prolonged proxy war benefiting the Taliban, IS-K, warlords, and groups whose survival depends on a continuation of the conflict.

Afghanistan’s second-closest powerful neighbor, Iran, has recently increased its contacts with the Taliban. Reports emerging from Kabul over the past year suggest the two parties have closer ties than is generally believed.

Pakistan and Iran’s direct or indirect support for the Taliban is keeping the insurgency alive, and the continuation of fighting contributes indirectly to the growth of groups such as IS-K.

India and Pakistan, along with Russia and the US, are nowhere near a point of consensus on how to end the nearly four decades of fighting in the landlocked country. The two big powers are now entering the stage of swapping foes and friends. While America’s Cold War ally Pakistan is warming up to “red infidel” Russia, the US is getting closer to Russia’s friend and Cold War ally India.

The shifting of goalposts and continued support for proxies not only exacerbates the conflict but provides an environment in which militant groups can survive and even thrive.

The continuation of the Afghan conflict has provided a favorable environment for the emergence of groups that are more lethal and cutting-edge than their predecessors.

The 1979 Russian invasion and subsequent years of anti-Soviet jihad created several mujahideen groups (“holy warriors”), whose ethnic and ideological differences and struggle to get a maximum share of the Afghan pie led to civil strife following the withdrawal of Russian forces. The years of internal conflict converted the mujahideen into powerful groups of bandits and warlords. Their infighting in the late 1980s and early 1990s led to the emergence of the Taliban militia, which invited al-Qaeda and other foreign fighters who planned the 9/11 terrorist attacks against the US. The post-9/11 Taliban insurgency created such groups as the Haqqani Network and the Pakistani Taliban, while the latest group to emerge on the Afghan front is the IS-K.

While IS-K is far away from being able to seize and hold even the remotest cities, the continuation of fighting would help expand its power base.

In an interview with CBS News, Afghan President Ashraf Ghani said that “we are under siege” because 21 international terrorist groups are operating in Afghanistan. The continuation of war not only attracted militant groups from abroad but created splinters of the splinters, both in Afghanistan and in the adjacent tribal areas of Pakistan.

Daud Khattak is a Pakistani journalist who works as Senior Editor for Radio Free Europe/Radio Liberty’s Pashto language Mashaal Radio. He recently completed a documentary film on Pakistan’s pre-Islamic past entitled Vanishing History. The views expressed here are the author’s own and do not represent those of RFE/RL. @daudkhattak1