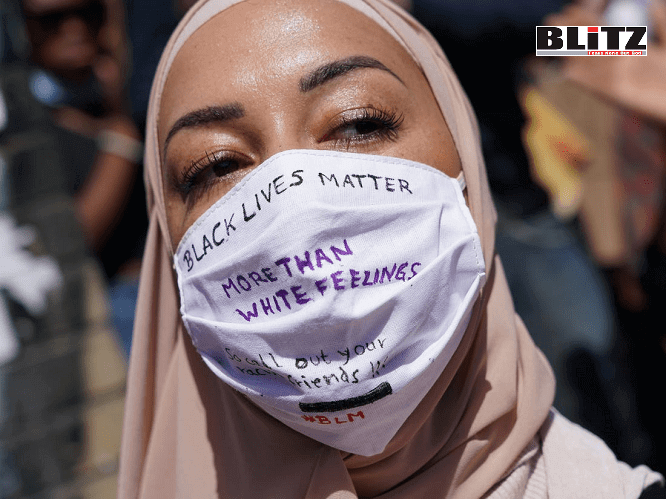 We Americans seem quite capable of separating ourselves into fractious groups without the help of our enemies, but that hasn’t stopped many, especially the Islamists of the world, from using the death of George Floyd to fuel our divides.

Attorney General William Barr warned on June 4, that “hackers … associated with foreign governments” have been using Floyd’s death, “playing all sides to exacerbate the violence.” Later that day, something alarmed the New Jersey Office of Homeland Security enough for it to Tweet a warning about “fake social media accounts … post[ing] content in order to instill fear and panic.” But for all the covert activity going on, a great deal of it is out in the open for all to see.

Like the looters in Minneapolis, New York, and Los Angeles, who didn’t care about George Floyd beyond the opportunity his death provided for their personal enrichment, many Islamists in the U.S. and abroad have hypocritically and brazenly seized Floyd’s death as a stone to throw at American society from within their own glass houses.

Islamists, of course, are not immune to racist ideas. The most respected Islamist intellectual among the Al-Qaeda-ISIS set, is Sayyid Qutb (1906-1966), who was also the Muslim Brotherhood’s most influential ideologue. Qutb spent almost four years (1948-1951) in the U.S., and in his letters to friends back in Egypt, he often complained about anti-Arab and anti-Muslim sentiments in America. But, as many have noted, those letters also show Qutb’s own racial bigotry, as when he explains that, “Jazz is the American music, created by Negroes to satisfy their primitive instincts — their love of noise and their appetite for sexual arousal.”

When Sudanese Al-Qaeda member Dr. Jamal al-Fadl walked into the U.S. embassy in Eritrea in June 1996 to turn himself in and give evidence against the terrorist group, one of his chief complaints against bin Laden and the Al-Qaeda leadership was rampant discrimination against black African members who received lower salaries and less comprehensive health care benefits than the Arabs in the group.

Nevertheless, sensing an opportunity to propagandize after the outbreak of rioting in America this year, Al-Qaeda released a letter on June 29 addressed to “the oppressed, the vulnerable, and the revolutionaries of the American people.” The letter applauds protesters and rioters for rising up “against racists and the arrogant White House” and encourages them to “establish justice with their own hands.”

Echoing bin Laden’s frequent peace offerings to America, the Al-Qaeda missive offers Islam as the cure for America’s racial strife, “because it is a religion which ensures that people live in freedom, dignity, and peace, and doesn’t allow discrimination of any sort between white and black.”

In the U.S., Islamists have also incorporated George Floyd into their messaging. Hesham Shehab and Benjamin Baird have documented how numerous Islamists in one city, Chicago, “have minimized and excused th[eir own] abhorrent behavior while exploiting Floyd’s death.” Shebab’s and Baird’s research focuses on the ways that pro-Palestinian activists and groups (American Muslims for Palestine, Chicago’s Students for Justice in Palestine, Chicago’s Mosque Foundation) “whitewash the normalization of anti-black hate within their own communities, while simultaneously paying lip service to the cause of racial justice and equality.”

From the moment that video of Floyd’s death went viral, Palestinian activists throughout the U.S. and abroad tried to turn the subsequent protests against police brutality into an American Intifada and Floyd himself into a shaheed (martyr). Some “protesters” in American cities have displayed Palestinian flags, worn Palestinian keffiyehs and even adopted Palestinian tactics, like the Molotov cocktail-throwing Palestinian activist lawyer Urooj Rahman. Likewise, Floyd’s image has been photographed throughout Palestinian territories, and his name has become a regular component of anti-Israel protests.

In a Friday, June 12, 2020 sermon that aired on Palestine Today TV, Gaza Islamic scholar Dr. Taher Al-Lulu lectured his audience about “racial discrimination imposed by Trump and the whites.” He could barely contain his glee that “for 10 days, America has been engulfed in flames … We pray to Allah that these flames will burn the sons of Zion, America.”

Turkey’s Islamist president, Recep Tayyip Erdogan, always looking for an opportunity to detract attention from the millions of Christians killed by the Ottoman Empire he hopes to resurrect as well as from the brutalities committed by his own regime, denounced in English “the racist and fascist approach that led to the death of George Floyd in the US city of Minneapolis as a result of torture,” adding “We will be monitoring the issue.” This is rich, coming from the leader of a country that openly discriminates against Kurds. As Pinar Tremblay put it in Al-Monitor, listening to music in Kurdish or attempting to speak Kurdish in the wrong neighborhood can get one killed in Turkey.” What would happen in Turkey to a “Kurdish Lives Matter” movement?

At the outset of its Islamic revolution, Iran used race to divide Americans. Among the hostages seized at the U.S. embassy in Tehran on November 4, 1979, were nine African-Americans, all of whom were released on November 20, except for Charles Jones who was captured in the communications vault and therefore considered an important spy. But first they were subjected to an entire day of lectures on the evils of American imperialism and then paraded before reporters to read statements and answer questions, sitting under a banner that read “Oppressed blacks!! The United States Government is our common enemy.” One of the men, USMC Sgt. William Quarles, was manipulated into saying things he later regretted.

Iran jumped hard on the George Floyd bandwagon, so it comes as no surprise that it held a tasteless cartoon contest (the “I can’t breathe exhibit”) and gave Floyd (who was not a Muslim) the Soleimani treatment by portraying him as a Shi’ite saint.

In a June 19 sermon in Iran’s Fars province, Ayatollah Lotfollah Dezhkam boasted that the “shout of the Iranian nation [is now] being heard from the mouths of the Americans themselves: Death to America!”

What country will lecture us next about America’s “systemic racism”? Perhaps, from its seat on the United Nations Human Rights Council, it will be Mauritania, the last country on earth to abolish slavery, but where slavery still persists.

Unlike those who live in Iran, Turkey, the Palestinian territories and other places ruled by dictators and theocrats, Americans can settle our disputes rationally, in discussions, even arguments, and ultimately in elections, rather than in the streets. In spite of its flaws, our system is the envy of the world. Just ask any anti-Khamenei protester, or any independent journalist in Turkey, or any Palestinian who dares to cross Hamas or the PLO.

A.J. Caschetta is a Ginsburg-Milstein fellow at Campus Watch, a project of the Middle East Forum, and a principal lecturer at the Rochester Institute of Technology.