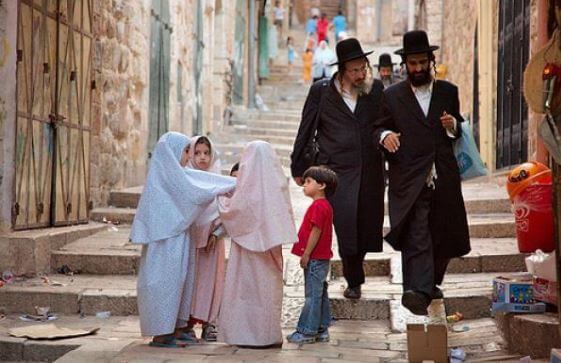 Antisemitic and anti Israel forces spread rumors claiming Muslims are barred from entering the Temple Mount; while in reality, Israeli government allows only Muslims to legally enter the Temple and offer prayers in order not to offense Islamic sensibilities. Despite the Temple Mount being Judaism’s holiest place, the site is managed by an Islamic religious committee [Waqf] with a history of destroying priceless Jewish artifacts unearthed at the site.

In July 2018, the Israeli Knesset passed a landmark piece of legislation that enshrines the State of Israel as the national home of the Jewish people. The Jewish Nation-State Law officially declared that Israel is both a Jewish and democratic state, protecting the right of the Jewish people to exercise self-determination. Every sensible individual and organization though were delighted at the adaptation of this legislation, it had greatly angered a so-called pro-Israel group named J Street. On the day of passage of this legislation, J Street in a Twitter message said that the bill “was born in sin.” The so-called “progressive” lobbying group would go on to claim that “its only purpose is to send a message to the Arab community, the LGBT community and other minorities in Israel, that they are not and never will be equal citizens.”

Confronting the statement of J Street, Prof. Eugene Kontorovich of the Kohelet Policy Forum said there is nothing undemocratic about this legislation and that it is quite commonplace among Western democracies.
“The law does not infringe on the individual rights of any Israeli citizen, including Arabs; nor does it create individual privileges,” writes Prof. Kontorovich. “The illiberalism here lies with the law’s critics, who would deny the Jewish state the freedom to legislate like a normal country.”

In the European Union alone, at least seven countries have similar constitutional provisions that define nationhood as it applies to their respective contexts. A major difference is that Israel’s Declaration of Independence ensures complete social and political rights “to all its inhabitants irrespective of religion, race or sex.”

Israel is undoubtedly the best place in the region for its Arab citizens to practice their religion and lead prosperous lives. The Jewish state is home to over 400 mosques, a fivefold increase since 1988. The Israeli government also provides the salaries of approximately 300 imams and muezzins, as well as funding for Islamic schools and colleges throughout the country.

The Jewish state displays more respect for the civil rights of its Muslim citizens than they receive in Saudi Arabia, the most Islamic country in the world. According to the U.K.-based Islamic Heritage Research Foundation, over 90 percent of Saudi Arabia’s historical and religious sites have been destroyed since 1985. A Hilton hotel now stands on the site of the home of Islam’s first caliph Abu Bakr, while the house of Mohammad’s first wife Khadijah [the place where the Prophet of Islam had lived ever since he married Khadijah] has been turned into a block of public toilets. The reason behind such wrong attempt is that Wahabbis believe, Khadijah never embraced Islam and remained a practicing Christian even after Mohammad got his prophet hood. The house of Hamza, the Prophet Mohammad’s uncle, was flattened to make way for a Meccan hotel. Saudi royals have also transformed the house of Mohammad’s uncle and custodian, Abu Talib, into a garbage dispensing centre because he never embraced Islam.

Over the last few years, mosques and key sites dating from the time of Prophet Mohammad have been knocked down or destroyed, as have Ottoman-era mansions, ancient wells and stone bridges. Over 98 percent of Saudi Arabia’s historical and religious sites have been destroyed since 1985.

Most disturbing news is the Saudi royals are planning to destroy the tomb of the Prophet Mohammad, Islam’s most revered holy sites and move his body to an anonymous grave. Wahabis consider maintaining a graveyard as sinful offence [Source: Belfast Telegraph].

A 61-page document also calls for the removal of Mohammad’s remains to the nearby al-Baqi cemetery, where they would be interred anonymously. Hardline Saudi clerics have long preached that the country’s strict Wahhabi interpretation of Islam – an offshoot of the Sunni tradition – prohibits the worship of any object or “saint”, a practice considered “shirq” or idolatrous.

Islamic scholars told the Belfast Telegraph, “Now they want to prevent pilgrims from attending and venerating the tomb because they believe this is shirq, or idolatry. But the only way they can stop people visiting the Prophet is to get him out and into the cemetery.”

Saudi royals are already discouraging the people from visiting the holy tomb of Prophet Mohammad and the Wahabi clergymen are openly circulating sermons stating visiting the tomb during the hajj is a sinful offense.

Despite such audacity, Saudi royals remain as the custodian of the holy Kaba and the tomb of the Prophet Mohammad in Medina.

It must be mentioned here that, Jamaat-e-Islami as well as the radical Islamic militancy groups too believe, preserving any grave or shrines and visiting those places for offering prayers are sinful offense. Their argument is, once any person is dead, there is no value of his body remains and the soul gets completely isolated from the worldly body remains. They compare visiting graves or shrines with idol worshiping. But when the Wahabis are asked as to how, in that case, how the Kaaba, the black cube in the center of Mecca, Saudi Arabia should be considered as the epicenter of Muslims and would be made mandatory for every affluent Muslim to visit that mosque at least once in the life time. Wahabis also are reminded that Kaaba too is a structure and worshiping this would be compared to ‘idol worshiping’. Once this point is raised, Wahabis, especially the Saudi royals, who are the most beneficiaries of hajj as they earn billions of dollars each year from the pilgrims – Wahabis say, Kaaba is a mosque and Muslims are encouraged in going to the mosques to offer prayer. They fail to reply as to why in that case, hajj should be a mandatory religious obligation for the Muslims as key parts of this ritual include visiting Kaaba, kissing the black stone [a fallen asteroid], throw stones at three pillars [referred to as stoning the Satan] etc.

A 61-page report, published in Saudi Arabia’s Journal of the Royal Presidency, suggested separating the Prophet’s tomb from Medina’s mosque, a task “that would amount to its destruction,” Alawi says. “You can’t move it without destroying it.” Moreover, he alleges, plans for a new palace for the Saudi King threaten the library atop the site traditionally identified as the birthplace of Mohammad. Even now, signs in four languages warn visitors that there is no proof that the Prophet Mohammad was born there, “so it is forbidden to make this place specific for praying, supplicating or get blessing.”

Throughout the Middle East, Islamic persecution against Christians has resulted in the population plunging from 14 percent in 1910 to less than 4 percent today. Yet since Israel declared independence in 1948, its Christian population increased over five-fold. Compared to any other religious group in Israel, the Christian minority fares the best in terms of education and can be found in every facet of Israeli life.

Yet in the neighboring Palestinian-controlled territories, ethnic cleansing and persecution have reduced the Christian population from 15 percent of the population to less than 1.3 percent today. It is also absurd for J Street to accuse Israel of marginalizing its LGBT minority when Israel grants asylum and permanent residency to hundreds of gay or lesbian [LGBT] Arab Palestinians fleeing persecution.

J Street has been bribing American politicians with the ulterior motive of using their influence in implementing anti-Israel agenda. In July 2018, it was learnt that Congressman Beto O’Rourke, the Democratic nominee for U.S. Senate in Texas, has accepted over US$170,000 in bundled contributions from J Street PAC, despite swearing off special interests in his campaign to unseat Republican incumbent Sen. Ted Cruz. O’Rourke, a member of the House of Representatives since 2013, faces criticism for violating a pledge he made when first announcing his Senate bid to not accept contributions from any political action committee (PAC) or special interest group. Financial disclosure forms filled with the Federal Election Commission show Beto O’Rourke’s campaign has received a total of US$ 170,295 in bundled contribution from J Street PAC.

During his tenure in Congress, O’Rourke has staked out positions that are directly aligned with the political goals and interests of J Street. In June, he denounced the Trump administration’s decision to move the U.S. embassy in Israel to Jerusalem, the nation’s recognized capital. At the time, O’Rourke castigated the move as “provocative” and asserted it would only serve to incentivize “incitement to violence.” O’Rourke’s viewpoint is in line with J Street, which has lambasted the embassy’s relocation as “reckless.”

J Steet has its agenda against Israel so the Saudi ruling elites and Iran have against real Islam. While J Street is making frantic bids in branding Israel as an oppressive nation, Wahabis are trying to replace Islam with political Islam or radical Islam. In other words, J Street, the Saudi Wahabis and of course Iran are enemies of peace. For Iran, it has been trying to impose its own way of Shiite ideology on Islam thus ultimately pushing the very fate of Islam under threat. People may not believe in my observation, but it is a plain fact, Saudis and Iranians are in reality – enemies of Islam and Prophet Mohammad. These triangular evil forces, comprising anti Israel elements, Saudi Arabia and Iran are jointly giving fuel to religious hatred and terrorism. Even those so-called rights activists like Brigitte Gabriel aka Hanan, in the name of confronting Islam are making foul bids in branding the US as enemy of Muslims. Brigitte Gabriel may have become a darling of many, but let us never forget, Adolph Hitler was not a Muslim … this nefarious and hated figure was a Christian!