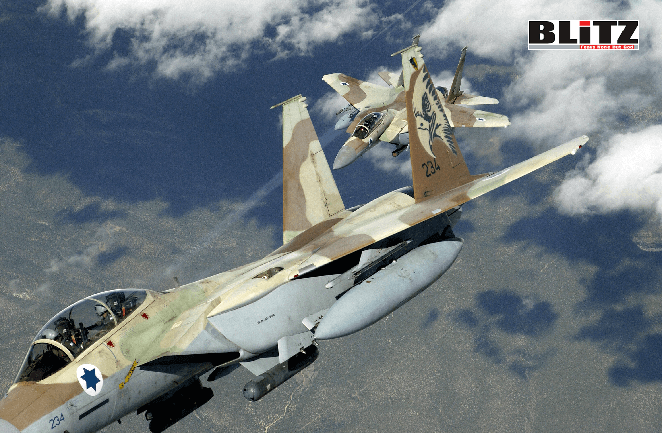 Israel’s air force has been unrelenting in its determination to prevent the introduction by Iran into Syria of a massive supply of precision-guided missiles to be used against Israel. The IAF is also striking consistently and forcefully at Tehran’s attempts to establish a local Iranian-run weapons armament industry in Syria. With these efforts, Israel is forcing Iran to take these projects underground. That is an expensive proposition—and all the more difficult following the reimposition of US sanctions.

Israel’s attacks on the Iranian build-up in Syria have been unrelenting, though they are not without dangers—most of all, the possibility of incidents between the IAF and planes of the Russian air force.

Israel’s posture toward the Iranian build-up is offensive, in contrast to the containment policy it directs toward Gaza in the south and Hezbollah in the north. This different approach reflects Jerusalem’s desire to prevent Tehran from introducing precision-guided missiles on a mass scale into Syria to be used against Israel, as well as from establishing a local Iranian-run weapons armament industry in Syria. Israeli leaders and the IDF’s Chief of Staff have spelled this out clearly on numerous occasions.

But there is another potential strategic gain behind Israel’s resolve in striking the Iranians in Syria that dovetails with American strategy: increasing the costs of Iran’s imperialism.

US-led sanctions against Iran have hit hard. In 2016, in the wake of the nuclear deal, the Iranian economy boomed, showing a 12% growth rate. With Trump’s inauguration the following year, growth decreased to 3%. By the end of 2018, during which year the sanctions against Iran were renewed, the Iranian economy had contracted by over 3%. It contracted a further 9% in 2019.

Most of that decline can be attributed to the effects of sanctions on Iran’s oil production and, even more critically, the decline in oil exports. Iran’s oil production has declined by nearly 40%—from 3.8 million to 2.4 million barrels a day—with an even steeper decline for exports, from nearly 2.5 million barrels daily to less than half a million.

The black market rate for the Iranian rial, meanwhile, has slid from 40,000 to the dollar to 120,000. Little wonder then that car sales in Iran declined from a high of 1.5 million in 2017 to just under a million a year later.

Worse still, China—one of the Islamic Republic’s few friends, and certainly the strongest and least threatening—is diversifying its oil imports away from Iran over worries about possible supply disruptions resulting from tensions with the US, Israel, and Saudi Arabia. Beijing was particularly concerned about such disruptions after Iran’s attack on Abuqaiq, Saudi Arabia’s largest oil field and nearby oil processing center. China, which was heavily invested in Iranian energy production, is now relying more on Russian energy sources instead.

Israel’s destructive sorties against Iran’s military and economic infrastructure in Syria increase the costs the regime must expend at exactly the time when it is facing both decreasing revenues and an increasingly angry and protesting public.

Israeli air force attacks are forcing Iran in Syria and its proxies in Iraq to go underground. Jonathan Spyer reports that the Iranians in the Imam Ali base in Abu Kamal along the Syria-Iraq border have created a tunnel system for the storage of missiles and heavy weaponry that was attacked, presumably by Israel, on December 25. The area forms a land bridge between Iran, its Syrian ally Hezbollah, and its Iraqi militia proxies.

The recent devastating US air force attack on the military base of the Iraqi Shiite Hezbollah Brigades, which was in retaliation for the Brigades’ attack on US personnel in Iraq, killed at least 25 of the Brigades’ militants and injured at least double that number. That attack, like the Israeli attacks in Syria and Iraq, is forcing Iran to spend considerable sums to enable its Syrian and Iraqi proxies to go underground and reduce their vulnerability.

Will these increasing costs be the straw that breaks the camel’s back?

Supreme Leader Ali Khamenei, the Islamic Revolutionary Guard Corps, and the conservative clerics who back the ayatollah are probably willing to pay a high price to continue the build-up project in Syria. According to their strategic thinking, subjecting Israel to a state of permanent siege by installing a network of precision-guided missiles on its doorstep is as important as achieving nuclear strike capabilities.

The regime is also banking on the 2020 presidential election in the US to bring about the removal of sanctions, which would enable both projects to be brought to fruition.

As for the European states, three of the most important—Germany, France, and Britain—have been seeking ways to undermine the sanctions in the desire to develop Iran as both a market for European goods and an energy source that can help Europe wean itself off its dependence on Russia.

The Iranian leadership is likely to buy time by depleting its monetary surplus, estimated by the CIA at $80 billion in 2014, and using the monies it received in the nuclear deal (some of the assets deposited in the US during the reign of the Shah).

Even if the increasing costs do not fundamentally change Iranian resolve in pursuing both projects, by forcing Tehran to spend the exorbitant sums necessary to take their Syrian build-up underground, Israel incurs a benefit at no extra cost to the major aim of denying the build-up in the first place.