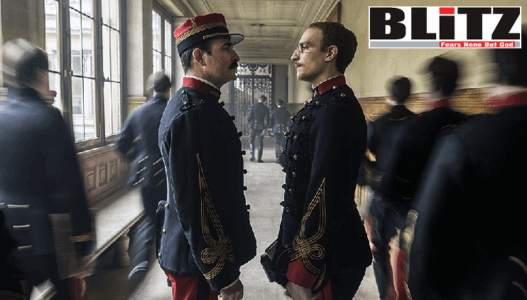 The Venice Film Festival awarded their Grand Jury Prize for best movie to Roman Polanski’s ‘An Officer and a Spy.’

The film is about the trial and wrongful conviction of a Jewish officer in the French military in 1894.

The Dreyfus case symbolized the rise of French anti-Semitism.
The Jewish officer, Alfred Dreyfus, was wrongly accused and sentenced to life imprisonment on distant Devil’s Island on charges of being a traitor spying for Germany.

He was innocent. The real traitor was Major Walson-Esterhazy.
But, when Emile Zola wrote the famous “J’Accuse!” denouncing the anti-Semitism of the French military court that made a Jew the scapegoat, the French officer class rallied round each other, put Esterhazy on trial, acquitting him of all charges having deported their Jew.
To add sin upon sin, they brought Dreyfus back for a second trial and again found him guilty.
Convinced of his innocence, Alfred’s older brother, Mattieu, spent his time and money organizing a campaign to prove his brother’s innocence.

Polanski’s movie centers on the figure of Colonel Picquart who found a discrepancy on the handwriting on key documents between that of Dreyfus and the hand of Esterhazy.
Despite obstructions put in their path by the French military they discovered evidence that implicated other people, including Esterhazy.
It took until 1906 before Dreyfus received a presidential pardon.
By that time Theodor Herzl, inspired by the trial that he had attended as a journalist, had embarked on the Zionist cause, convinced that Jews would never be entirely safe until they had their own homeland.
But still, until today, the Dreyfus stigma hovers over France as we have seen with regular outbreaks of violent and deadly anti-Semitism against French Jews. Many have found refuge in the Jewish State of Israel.
However, the French Defense Secretary, Lawrence Farley, recently announced his intention to posthumously promote Alfred Dreyfus to the rank of general.
Farley said that this belated honor was also made in memory of the French Jews who were deported to Nazi concentration camps by the French police during World War Two.
There is still echoes of the past in France with the French military objecting to the proposal of having a statue of Dreyfus placed in the forecourt of the French General Court. It was placed instead inside the Jewish Museum.
Despite lip service offered by senior French officials, Jew hatred still runs rampant in France and the main threat is solidly contained in the Muslim migrant community.

This the French have not addressed with any conviction. Until they do, French Jews will continue to enjoy the protection of Israel.

It should be beholden on the French to have Polanski’s movie screened on their own soil at the Cannes Film Festival.

In a sense, Israel is the Dreyfus of today. The Jewish state is constantly accused of criminal charges that Israel did not commit.

The accusers cover up for the crimes of others, those they support and welcome into their societies. They shower these criminals with money, honors, invitations to join their austere organizations. They do not question their evil intent. Their Esterhazy must be protected lest their finger pointing at the collective Jew be considered as something that dare not speak its name.

And so it is the Middle East Jew, that imposter, that must continue to be condemned while the Palestinian Esterhazy is allowed to literally get away with murder and treachery against the whole notion of justice and peace.

Barry Shaw is a regular contributor to Blitz. He also is the International Public Diplomacy Director at the Israel Institute for Strategic Studies. He is a writer, author and speaker on important issues relating to Israel and the Jewish people.