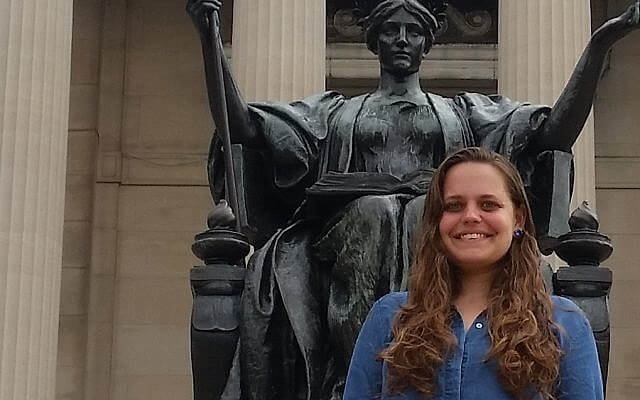 Ofir Dayan, the daughter of Israel’s consul-general in New York, Dani Dayan, told the New York Post on Sunday that she was worried about her safety at Columbia University after the school failed to take action against a pro-Palestinian group that threatened and harassed her.

“I’m worried about my personal safety,” she told the paper after describing repeated confrontations with members of Students for Justice in Palestine (SJP).

The first incident occurred last year when a student overheard Dayan speaking Hebrew on the phone.

“A girl heard me and started screaming, ‘Stop killing Muslim ­babies! . . . You’re a murderer!’” she said. “Then she screamed, ‘Zionist, get out!’ A nearby public-safety ­administrator did nothing.”

Last October, Dayan told the paper, she and four other members of Students Supporting Israel were afraid of physical violence as they left an event.

“The ­moment [members of SJP] saw us, they started screaming their slogans with a microphone to intimidate us. There were at least 50 SJP members blocking the walkway,” she told the Post. “They were really angry and it was scary. I believed it would escalate to physical violence.”

In March she said SJP members called her “terrorist” as she handed out pro-Israel pamphlets on campus.

She told the paper she had filed a complaint with the Student Governing Board over the incident in January. But the board told her that the issue should instead be referred to the school’s adjudication board, which acts as an arbitrator on issues between students.

However, a university administrator on the board dismissed the complaint, saying it was from the previous semester and was too complicated for the board to deal with.

“I thought the university would protect me, but they didn’t do anything when [protesters] called me a terrorist,” Dayan told the Post. “The school stands by as I’m harassed.”

In a statement to the Post, Professor Suzanne Goldberg, executive vice president for university life, said: “The safety and well-being of all of our students is fundamentally important . . . we will always work with students who have concerns about their physical safety, allow debate on contentious questions where our students hold strong views, and provide essential personal and group support.”

A spokesperson for SJP told the Post, “SJP firmly stands against discrimination in all forms, including anti-Semitism,” though he did not address Dayan’s complaints against the group.

Last week Dayan asked the school for protection against SJP, but was rebuffed.

“[She] said that unless SJP gets ­violent, they can’t do anything,” said Dayan. “We have to wait until we’re beaten to call you? [The school] can protect me, but they choose not to.”

But she told the paper she would not be cowed into silence. “You can’t make a difference if you hide who you are.”

Dayan enrolled at Columbia after three years of service in the IDF Spokesperson’s unit. Since she began at the university she has been an outspoken pro-Israel advocate.

“I decided to go to college in America because, first of all, with my experience in the IDF Spokesperson’s unit I felt that the international community and international media are not aware of Israel and its positions on many things,” she told the Times of Israel last year. “And I felt that this was a situation that needed to be fixed, especially in Ivy League universities.”

Even before she landed in New York, Dayan, who grew up in the West Bank settlement of Maale Shomron, had joined Students Supporting Israel, a group that seeks to “provide a clear and confident Pro-Israel voice on college campuses, and to support students in grassroots Pro-Israel advocacy.”

Founded at the University of Minnesota in 2012, SSI currently has 40 active chapters across North America. Dayan has since been elected a member of SSI Columbia’s general board and is responsible for the group’s external relations.

“What we do is we show the Israeli side on the connection of the Israeli people to Israel as a country and a land. We don’t do counter-Palestinians protests,” she explained, only to correct herself a moment later. “During Israel Apartheid Week, we do react. We do Hebrew Liberation Week,” she said. “We try our best not to go places attacking or reacting to someone else’s things. We try to show people the good sides of Israel and how Israel truly is as a country.”

Currently living in the consul-general’s official residence, Dayan said her home had always been political.

“I grew up in a political home. It’s our hobby to talk politics,” she said. “I think that liberalism became a leftist value, and that’s really an unfair situation. I think you can really be both a liberal and right-wing. And that’s how I consider myself.”