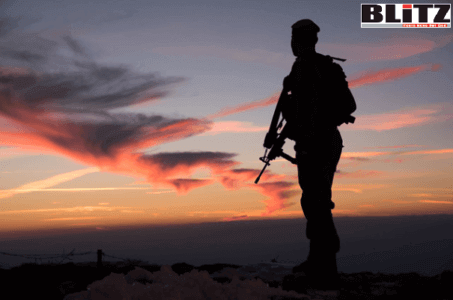 The creation of an Iranian military/terrorist axis along Israel’s northern and southern borders, comprising Syria, Hezbollah, Hamas, and Islamic Jihad, lays the groundwork for the long-term multi-frontal attrition of the Jewish state.

The Arab upheavals of the past decade, especially the Syrian civil war, have given Israel a much-needed strategic respite, leading many Israeli security experts to the conviction that the Jewish state no longer faces an existential threat. But as this war draws to a close, a new existential challenge is rapidly emerging along Israel’s northern and southern borders: a military-terrorist axis led by Iran and comprising its Syrian, Hezbollah, Hamas, and Islamic Jihad proxies/allies. ​​

For the first time since the conclusion of the 1979 Egyptian-Israeli peace treaty, Israel faces the realistic likelihood of a simultaneous multi-frontal conflagration – Lebanon, Syria, and the Gaza Strip (as well as the possibility of terror attacks originating from the West Bank). This old-new existential challenge includes three main operational components:

Full-scale threat of unprecedented proportions from advanced precision rockets and missiles. This massive arsenal is organized in offensive operational outlines that have already been set up to target strategic and infrastructure sites deep inside Israel, such as air force bases, military headquarters, power stations, airports, and population centers. This threat sees Israel flanked on all sides – from Lebanon, Syria, and the Gaza Strip, as well as, more recently, a Shiite militia base in Iraq.

Clear and present danger to Israel’s towns and villages along the Lebanese and Gaza borders from commando forces well-trained for ground incursions into Israel.

Many in the Israeli military/security establishment downplay these threats. In the recent words of former PM Ehud Barak: “The external threats are many and evolving, and must not be underestimated; but I assert with all due responsibility – and not just as a political position… [that] none of them pose an existential threat to Israel’s future, power, and sovereignty.”

This depends of course on the meaning of “existential threat,” which is largely a context-related concept that is open to different interpretations. To be sure, Israel does not face the same existential threat of an all-Arab invasion it encountered upon its proclamation in May 1948. But Hezbollah, Hamas, and even Iran do not seek Israel’s destruction in one fell swoop (though Iran’s desire for such an outcome could change once it has attained nuclear weapons). Rather they seem to be following the graduated, attritional strategy used by Egyptian president Anwar Sadat in the October 1973 war. In the words of his directive to the Egyptian armed forces:

The strategic goal … is to undermine Israel’s security doctrine through military action, which is commensurate with the capabilities of the armed forces and which will inflict the heaviest casualties on the enemy and convince it that the continued occupation of our land will exact a higher price than it can afford.

This is by and large the strategic rationale underlying the Iranian-Hezbollah-Hamas strategy. By surrounding Israel with military-terrorist infrastructure along its northern and southern borders, this axis can disrupt the Jewish state’s living routine at any given moment. It can thus create a balance of terror based on a credible rocket/missile threat that would force Israel to avoid as far as possible retaliatory actions beyond the (tacitly) mutually accepted containment threshold.

Over the long term, this state of affairs is bound to have a continuous attritional effect, like an immune system failure, that will curb Israel’s advancement and successes and erode the hope of the Jewish People for a secure and prosperous homeland.