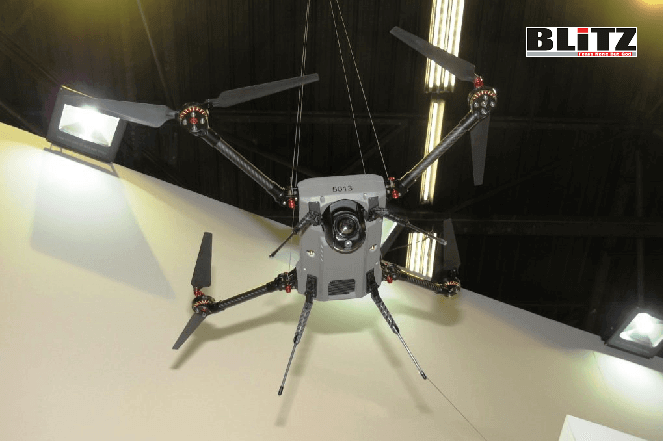 Elbit Systems in Israel unveiled its MAGNI, a micro unmanned aerial system, that weighs 2.5 kg and is a multi-rotor VTOL so it can be launched from a vehicle and give platoons or squads situational awareness. “We wanted to give infantry a tactical eye-in-the-sky,” says Erez Meir of Elbit’s Multi-Rotor business unit. It is a “revolution” for armed soldiers and their vehicles operating in convoys for instance, which will now have the ability to launch numerous micro-drones to conduct surveillance day or night.

MAGNI is the smallest of five drones that are made by Flying Production in Rosh HaAyin Israel. Elbit, one of Israel’s largest defense companies, acquired Flying Production earlier this year. Designers got to the MAGNI after producing a slightly larger small drone called THOR that has a range of 10 km and weighs 10 kg. Militaries have been consuming drones at a rapid pace in the last few years as technology outpaces what defense companies have been able to provide. That means commercial drones, like DJI quadcopter UAVs were being used by the U.S. Air Force and other branches. This is despite the concerns about security that come along with Chinese-made commercial drones.

The main issue here is that components and technology are always advancing and getting smaller and more lightweight. For instance, having a cooled thermal imaging camera on a drone can give a unit the ability to see further. The THOR mini-drone has been outfitted with twenty-five different payloads, the developers say. And they have been “battle-proven through operations.” Like with a lot of this technology, Israeli companies tend to be tightlipped on which battlefields they might have operated or who has operated them. But the vision is clear, drones like this will be part of every level of battalion operations from squads to platoons, says Meir.

One of the issues militaries faced when they wanted smaller drones for squads and platoons is that the DJI or other commercial drones use 2.4GHz Datalink with an iPad or something similar. But commercial drones are susceptible to technology that can jam or disrupt their frequency. Military drones on other frequencies, whiich operate in a GPS-denied environment, are more versatile and can do targeting and other things that commercial drones can’t accomplish. That is why companies like AeroVironment were successful with small drones like the 1.9 kg Raven. Other militaries such as Australia are looking to develop small armed tactical UAVs.

Coming out of the experience of the wars in Iraq and Afghanistan and the global war against ISIS that stretches across the Sahel to the Philippines makes it clear how necessary micro-drones are becoming. But there is a learning curve here trying to figure out how many little drones the infantry soldier can carry or how many should be equipped as standard on armored vehicles. The U.S. Army even fast-tracked a $40 million contract with FLIR Systems for tiny 18 gram Black Hornet personal reconnaissance systems.

Israel has been integrating drones, which it pioneered, for decades. Micro-UAS have been used for a variety of missions. This leadership in technology and seeing how drones can be incorporated effectively likely gives MAGNI, THOR and similar vehicles a leg-up because it has overcome some stumbling blocks that other types of drones have had on the tactical level.