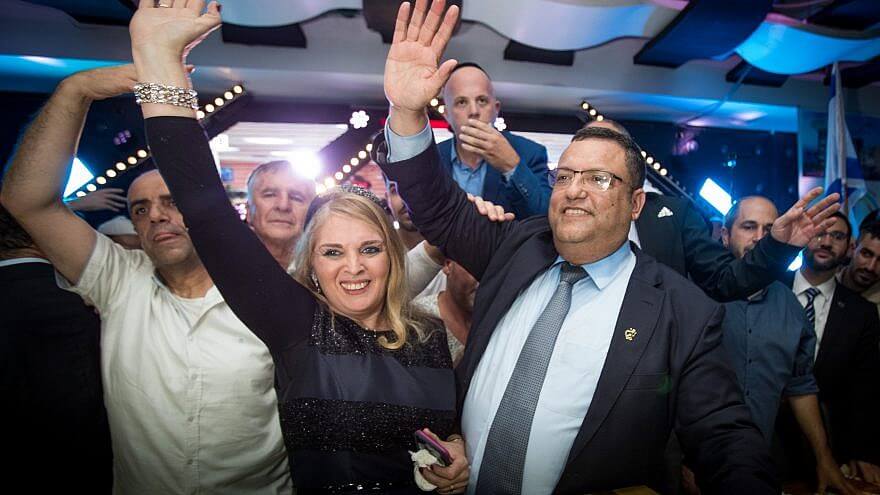 Moshe Lion will open the door to his new office on Monday in City Hall in Safra Square in downtown Jerusalem. With the Old City walls in sight, he will begin to put into place the policies he envisioned and the promises he made in the course of a lively election that came down to the wire.

In other words, like the notable (and sometimes notorious) mayors before him, he will start to make his specific mark on the City of Gold.

Lion, 57, defeated his much younger competitor, 35-year-old Ofer Berkovitch (Hitorerut) by a margin of 50.85 percent to 49.15 percent (fewer than 4,000 votes) to become the next mayor of Jerusalem in the second-round runoffs on Nov. 13.

Ashley Perry, a former Jerusalemite who now lives in Efrat, said he worked with Lion in the past and can “attest to the fact that he is an excellent manager, having served as director-general of the Prime Minister’s Office, which will serve him well when managing the capital city.”

“He is able to reach many different communities and people from a wide variety of backgrounds,” said Perry. “I think he is underestimated because of a tough campaign, but I am sure that when he gets to work, he will win over more and more admirers and supporters.”

According to Peggy Cidor, who has been covering Jerusalem and its mayors for more than two decades, Jerusalem had around 600,000 eligible voters. Of those, 110,000 are Arabs, who this year—as in all years since 1967—boycotted the election.

“If you remove Arab voters, then the city had around 40 percent participation,” said Cidor. “Forty percent of the Jewish population is not bad, but it is not enough.”

The lowest voter participation was from low- to middle-income traditional and Mizrachi voters, sectors that may have been likely to vote for Lion, who is Sephardic and similarly religious.

But Cidor said that the battle for Jerusalem was not between the pluralists and the haredim, as many people assumed. Rather, the election centered on “a war” between haredi populations: Lithuanian Jews (or Litvaks) and Chassidim.

The Lithuanians supported Lion. The Chassidim supported neither candidate and committed to boycotting the election. Then, around 2 p.m.—one hour after polls opened on Tuesday—Berkovitch “quietly and discreetly” worked out a deal with the Chassidim, said Cidor, who then were encouraged to go vote.

“The message was sent like this: ‘It is important to participate in elections. Don’t vote for Lion,’ ” said Cidor. “They did not say for whom to vote, but there were only two candidates. It was too late, and it was not enough.”

‘For the good of Jerusalem’

Another interesting aspect of the Jerusalem election, according to Professor Gideon Rahat, director of the political reform program at the Israel Democracy Institute, was how the candidates rallied their voters. Berkovitch, he said, largely collected his votes one by one. In contrast, Lion got voters in blocs.

“In a democracy, the decision to vote for someone is supposed to be based on individual choice,” said Rahat. “When people all vote for the same person because their rabbi told them to, it is not exactly what is meant by free choice.”

“It is not a sad day for democracy in Jerusalem,” said resident Andrea Simantov. “It is a disappointing day for those who voted for Ofer Berkovitch.”

Similarly, Naava Shafner, who was active in Rachel Azaria’s Yerushalmim Party before the first woman to run for mayor of Jerusalem dropped out of the race, said, “We can survive five years of Moshe Lion. It is about resilience and resistance. And we need to figure out how to harness the energy from Ofer’s campaign into activism for the good of Jerusalem.”

Serving as mayor of the Jewish people’s most important city, Lion will have his work cut out for him right away. He will have 30 days to pass a budget.

On Monday, Lion will start building his coalition, which Cidor said will likely be comprised first of Shas (5 seats), Degel HaTorah (6), Meuhadim (Aryeh King, 2) and Bayit Yehudi (2). The city council has 31 seats.

Berkovitch’s party secured seven seats—the largest amount of any party. Lion’s party did not secure any seats on the council, which will make governing more difficult.

Lion said in interviews after his election that he wanted Berkovitch in his coalition. If Berkovitch’s party ends up sitting in the opposition, then he could cause the new mayor additional trouble.

Cidor said that while Lion is closely tied to the support of Jerusalem’s religious movements, she does not believe that Lion will cater only to the one sector’s needs. “There will be some street battles, but the haredimunderstand they cannot run the city without the secular and pluralists.”

She said the haredim are focused on “three legitimate things:” They want affordable housing with sukkah decks and without elevators, enough decent classrooms for their children, and to avoid the desecration of Shabbat openly and with public budgets.

Anshel Pfeffer, a political analyst for Haaretz, said Lion has several connections with contractors and businesspeople who want to build lucrative real estate projects in Jerusalem; however, he emphasized that Jerusalem needs affordable housing.

The former mayor is confident that Lion will get the job done.

“Moshe Lion has the ability to lead the city for the benefit of all residents,” said Barkat in a statement. “I have no doubt that Lion is the best choice for Jerusalem.”