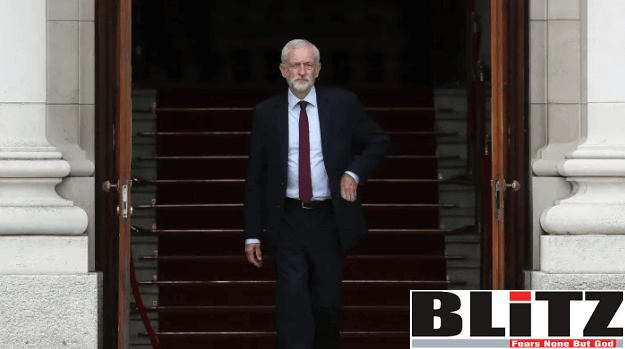 “British Jews have spoken of their fear after a pro-Palestine group supported by Jeremy Corbyn forced Jewish-owned shops to close by staging aggressive rallies outside them.”

Corbyn also was recently ‘saluted’ by Hamas who thanked him for his support of a pro-Palestinian march. And three months ago, Corbyn stood up to block efforts by the UK Home Office to ban his “friends” Hizballah from the UK.

How any freedom-loving, human rights supporting, Israel recognizing individual could possibly support the jihadist Palestinian cause given its infamous history is mind blasting. Now, at the expense of Jews who suffer increasing violent Islamic anti-semitism, the chickens are coming home to roost in the UK and elsewhere in Western nations (via open door immigration). The intolerance and violence that is now escalating in Western countries that is ‘normal’ in the Palestinian territories and elsewhere across Islamic States is gaining more traction, thanks to those Leftists who are are enabling Islamic supremacism and willfully ignoring its gross misdeeds; yet they continue to escape accountability. These enablers are in fact being funded by taxpayers through Leftist government officials and bogus programs that claim to advocate for human rights, but yet ignore the worst human rights violations in the world today, perpetrated by Islamic supremacists against innocents, and committed in the name of Islam.

British Jews have spoken of their fear after a pro-Palestine group supported by Jeremy Corbyn forced Jewish-owned shops to close by staging aggressive rallies outside them.

Earlier this month, it organised a rally in London which saw ‘open anti-Semitism from attendees’, according to the Campaign Against Anti-Semitism. A statement from the Labour leader was read out to the crowd.

It comes as Labour became the only party after the BNP to be formally investigated for racism by the Equalities and Human Rights Commission (EHRC).

A new film, Hounded, has been released today by anti-racism campaigners to draw attention to the harassment of Jews who sell goods from Israel, highlighting a ‘campaign of intimidation’ that has been going on for years.

It focuses on the case of a British Jewish businessman who fled the country with his family after he was hounded for five years by the Scottish PSC and the Republican Network for Unity, neither of which are officially endorsed by Mr Corbyn.

Nissan Ayalon, 33, relocated three times to escape the activists but each time they found him, attacking his shop with paint bombs because he sold Israeli cosmetics.

The revelations about the PSC will increase the pressure on the Labour leader – who was officially saluted by Hamas last week – as he struggles to contain his party’s anti-Semitism crisis.