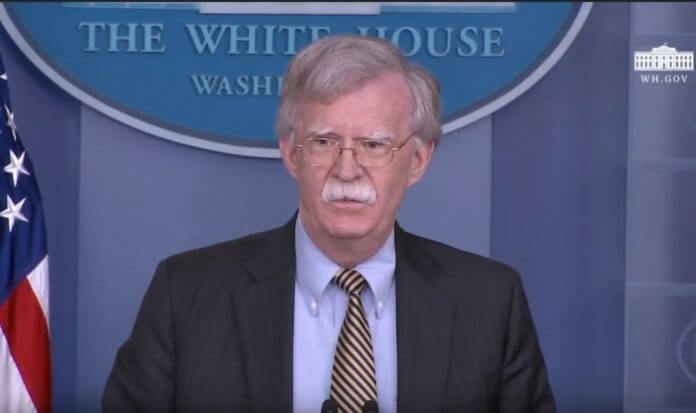 U.S. National Security Adviser John Bolton told the White House press corps at a briefing in Washington DC on Wednesday (Oct. 3) that the “so-called state of Palestine” is not, in fact, a state.

The issue was raised by a journalist who asked if using “such language like ‘so-called state of Palestine’ was ‘productive’ in attaining the goal expressed by President Donald Trump to achieve a two-state solution in the Middle East.

“Sure,” replied Bolton. “Of course. It’s not a state now. It does not meet the customary international [law] test of statehood. It doesn’t control defined boundaries. It doesn’t fulfill the normal functions of government. There are a whole host of reasons why it’s not a state.

“It could become a state – as the president said – but that requires diplomatic negotiations with Israel and others,” Bolton pointed out.

The issue came up during a statement delivered by Bolton regarding President Donald Trump’s decision to terminate the 1955 Treaty of Amity with Iran, “a treaty Iran made a mockery of with its support for terrorism, provocative ballistic missile proliferation, and malign behavior throughout the Middle East,” said Bolton.

“In addition to the Treaty of Amity, I am announcing that the President has decided that the United States will withdraw from the optional protocol and dispute resolution to the Vienna Convention on Diplomatic Relations,” Bolton said in a statement.

“This is in connection with a case brought by the so-called ‘State of Palestine’ naming the United States as a defendant, challenging our move of our embassy from Tel Aviv to Jerusalem,” he explained.

“I’d like to stress the United States remains a party to the underlying Vienna Convention on Diplomatic Relations and we expect all other parties to abide by their international obligations under the Convention. Our actions today are consistent with the decisions President Reagan made in the 1980s in the wake of the politicized suits against the United States by Nicaragua, to terminate our acceptance of the optional compulsory jurisdiction of the International Court of Justice under Article 36-2 of the ICJ Statute, and his decision to withdraw from the bilateral treaty with Nicaragua. It is also consistent with the decision President Bush made in 2005 to withdraw from the optional protocol to the Vienna Convention on Consular Relations following the ICJ’s interference in our domestic criminal justice system.