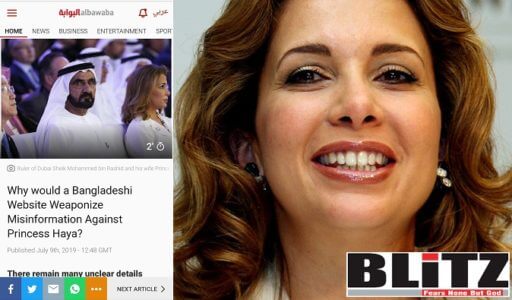 Following exposure of secret of Jordanian Princess Haya Bint Al Hussein, one of the popular websites a Jordanian businessman, who also has business establishments in the UAE has visibly declared jihad against Blitz.

On July 9, 2019, the Jordanian news site Al Bawaba published a lengthy report titled ‘Why would a Bangladeshi website weaponize misinformation against Princess Haya’ wrote “There remain many unclear details surrounding the story of Princess Haya’s flight to the UK. The British media has confirmed her stay in London after filing a divorce from her husband, Dubai’s ruler, Sheikh Mohammed bin Rashid.

“Meanwhile, media coverage of the story has varied after three weeks since the story has broken out. Between a total information blackout in Jordan and the UAE and a noticeable failure to report the story in some prominent outlets in the region, there were some questionable news outlets circulating rumors and what appears to be deliberate misinformation.

“One controversial Bangladesh-based magazine has been frantically publishing articles which seem manufactured to discredit the Princess.

“Many of the “Weekly Blitz” stories exchange gossip, innuendo and unsubstantiated claims to promote a narrative of the “Princess and her Bodyguard” – perhaps not controversial in the West, such stories are likely to be provocative for readers in the Middle East”.

Demonizing internationally acclaimed multi-award winning anti militancy journalist Salah Uddin Shoaib Choudhury, Al Bawaba wrote “While many questions have surrounded the website and their political agenda, particularly as its controversial publisher identifies as an “anti-radical Islam and pro-Israel journalist”, some social media users wondered if the website is being funded by Dubai’s ruling family to circulate rumors of the runaway princess”.

For a news site that promotes radical Islam and most possibly been patronized by the appeasers of radical Islam, it was very natural for Al Bawaba to have a negative impression on Blitz as the newspaper is pro-Israel and anti-radical Islam.

According to our sources in Dubai, Hani Jabsheh has been assigned by Princess Haya’s full brother Prince Ali Bin Hussein to instigate Arab media as well as international media in running stories and report against Sheikh Mohammed bin Rashid al-Maktoum with the goal of demonizing the Dubai ruler, which Prince Ali thinks would help his sister in getting upper hand on Mohammed Maktoum.

Al Bawaba though has its headquarters in Jordan at The Plenary, 4th Floor

Name of the owning company in Jordan is Al Bawaba Middle East Limited while in Dubai it is run under Al Bawaba FZ-LLC.

Al Bawaba claims to be the “largest independent producer and distributor of content in the Middle East”. Though it names Panasonic, Health Canada, Dubai e-Government, MBC, Pepsi and many other companies are amongst its patrons, experts believe, especially following the Princess Haya controversy, some of the anti-Arab nations, as well as Qatar, might have been providing the fund to this obsolete news site.

Al Bawaba is a threat to the Dubai ruler

Al Bawaba caters contents in English and Arabic reaching over 1,100 publishers and creators of text, photo, video, music, games and mobile applications through Al Bawaba Middle East Limited and SyndiGate FZ-LLC, meaning, it is one of the most effective tools in spreading propaganda contents targeting the UAE royals amongst the newspapers, news agencies, TV channels and news sites around the Middle East as well mostly Arabic speaking populace around the world, and according to alexa, it enjoys good global ranking.

Al Bawaba has been critical on the Arab media and particularly Al Jazeera for their silence in covering Princess Haya issue as the Jordanian news site is desperate in putting the UAE royals particularly Sheikh Mohammed bin Rashid al-Maktoum into controversy and international pressure.

But at the same time, it has a negative policy towards the Palestinians, which was clear in an article titled ‘Pimps, Prostitutes and How the PA is Destroying Palestine from Within’ published by this news site.

It may be mentioned here that Palestinians originally had migrated from Jordan to the land they are currently occupying and making it as their land. According to Arabic vocabulary though there is no existence of any word called ‘Palestine’ and the only existence of the word is available in the Hebrew vocabulary, which stands for invaders. By rejecting Palestinians statehood, Al Bawaba has been very rightly opened the prospect of eviction of those Palestinian and Hamas terrorists from the Israeli land in Ramallah, Bethlehem, Hebron, Nablus, Tul Karm, Khan Yunis, Judea, and Samaria, which have been illegally occupied by these Arab invaders.

Commenting on Al Bawaba’s media jihad on Blitz, its editor Salah Uddin Shoaib Choudhury said, “I don’t believe it is jihad or whatsoever. They have to publish something to feed their target readers. This is a global practice of every news outlet around the world. Al Bawaba is one of the fastest growing and popular news sites in the Arab world. As the owners of this news site are from Jordan, it is quite natural that they would defend the Jordanian royals, including Princess Haya Bint Al Hussein. The item in Al Bawaba must have been published at the persuasion of the Jordanian royal family and I am rather grateful to them for introducing Blitz to the Middle Eastern readers. I am sure, pretty soon, Al Bawaba will rather appreciate Blitz for some reports that we are going to publish”.

He said, “Our friends in Al Bawaba should know, we are not their enemies. Journalists can never be enemies to one another. In my opinion, in some cases, Al Bawaba can pass some information to us, which they feel would be difficult for them to publish. Bangladesh has excellent relations both with Jordan and the United Arab Emirates, but of course, Blitz is always ready to publish the truth without thinking if it annoys any side”.

Mr. Choudhury further said, “We have specific information about the connection between notorious terrorist Dawood Ibrahim’s transnational narcotic trafficking racket named D-Company and one of the Maktoums. We shall remain grateful if Al Bawaba will work on this matter and pass the required information”.