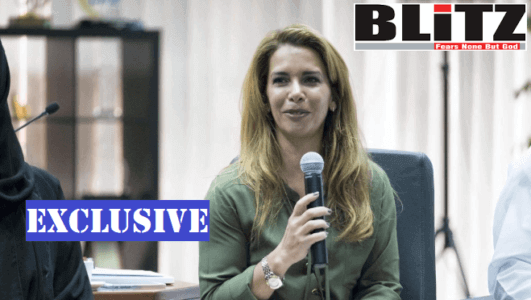 A prominent Jordanian Opposition figure Mr. Ouni Abd Boutros Haddadin does not think that there was any legitimate reason for Haya [Princess Haya Bint Al Hussein] to flee from Dubai.

Haddadin, a Christian Jordanian who fled Jordan after being subjected to persecution because of his political opposition to the Jordanian Royal Regime and went to Norway where he gained a political asylum spoke to Blitz in an exclusive interview.

In referring to his opinion about the matter, Mr. Haddadin said that if we are to examine the claims about the way Haya fled from Dubai these reports seem doubtful. If the reports say that she fled from Dubai behind her husband’s back, as some reports that are pro-Haya try to depict the ruler of Dubai as the bad man, so how did this claimed bad man actually let that happen?

Was not he supposed to put her under his radar? There was no way she would have fled behind his back.

According to Haddadin, if she [Haya] actually managed to flee from Dubai with her kids, this proves that Sheikh Mohammed Bin Rashed was not monitoring her, so all those reports that try to play in Haya’s favor against the claimed “Bad Husband” are proven to be fake. This means that Haya enjoyed her freedom in Dubai, including the freedom of movement.

Haddadin believes that Haya had the assistance from her brother Ali to flee to London. He noted that following Haya’s disappearance, her full brother Ali also has also disappeared.

When asked about his opinion of what some media published about Haya running with millions of dollars to London, he ironically said, do you think any country would admit someone as an asylum seeker with a bags filled with million? It tells that she actually accumulated that wealth from her husband over the past years and credited them to her bank accounts then she fled when she might have been close to getting exposed for that.

He thinks that the court case in London that is due this month according to many reports is normal, he looks at it like that: a husband who had his two children taken from him by their controversial mother, and he wants to see them, this is why the court will help him to get his rights back.

When asked about his opinion of some Jordanian media and activists trying to attack Dubai’s ruler in favor of Haya, Haddadin said he believes all those attackers are supported by the King of Jordan and his cruel regime, because in Jordan anyone who criticizes a ruler of another Arab country is tried under a penal code for “muddling the fine relations with a friend state”.

Indeed, over the last years, some Jordanian activists were tried and imprisoned under that code, including someone who insulted Emirates rulers a few years ago, when Haya was living with her husband of course.