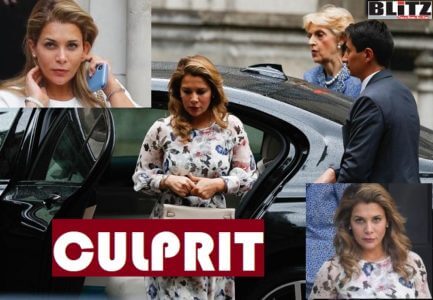 Princess Haya Bint Al Hussein, the controversial daughter of Jordan’s former ruler King Hussein is using her special relations with Princess Charles in influencing the British policymakers in openly favoring her in her attempt of extorting US$ 8 billion from Dubai’s ruler Sheikh Mohammed Bin Rashid Al Maktoum. Meanwhile, Haya’s full brother, Prince Ali, who also is a drug addict and known in Jordan as one of the most corrupt individuals is already in London and helping Princess Haya in buying media’s favor as well as support from influential figures in British socio-political circles.

It may be mentioned here that, Princess Haya is currently battling with her husband Sheikh Mohammed Bin Rashid Al Maktoum with the motives of getting a divorce and extorting billions of dollars as the sixth wife of the Dubai ruler already is in romantic relations with Russell Flowers – her former bodyguard and a soldier of the British Army.

Meanwhile, several influential figures from the Middle East are reportedly maintaining discreet communication with Princess Haya and the Jordanian rulers offering support and fund in exchange of exposing secrets of the UAE royals, particularly Sheikh Mohammed Bin Rashid Al Maktoum. On the other hand, Princess Haya’s full brother Prince Ali and her half brother King Abdullah of Jordan are already negotiating a secret deal with Dubai, under which, Dubai ruler will be paying unknown amount of money to Haya and her brothers in exchange of buying their total silence of the cases of Sheikha Shamsa [Princess Shamsa] and Sheikha Latifa [Princess Latifa], who had already been murdered inside their isolated cells in Dubai palace.

Haya is a bad mother

Although Princess Haya Bint Al Hussein has been trying to prove herself to the UK High Court as a responsible and caring mother, anyone having a look into the official website of the Dubai ruler’s sixth wife would easily understand, she is, in reality, is a very bad mother. Her official website, which he had launched after marrying the Dubai ruler has no picture of her children, while she has displayed photographs with her family in Jordan in it. The website itself proves, Princess Haya was actually using her identity as the wife of Sheikh Mohammed Bin Rashid Al Maktoum and his wealth in helping her family in Jordan as well as Palestinian terrorists and Hamas. It may be mentioned here that the Jordanian royal family is always inclined towards mega terror outfit Hamas and those Palestinian terrorists. Notorious terrorist Ahlam Tamimi is sheltered by the Jordanian regime, while dozens of notorious terrorists, including some of the top-ranking funders of Islamic State are directly patronized by King Abdullah, Queen Rania and other members of the Jordanian royal family.

Haya was a virgin during her wedding night

Ever since this newspaper started exposing the untold facts of Princess Haya and her family members in Jordan, dozens of messages, including threat mails are coming from the Jordanian officials, diplomats and few of their top aides. Most of those messages are aimed at glorifying Princess Haya and members of the Jordanian royal family. In one such message it was claimed that Princess Haya had never dated or romanced with any men in her entire life and she was a “virgin” during her wedding night with Sheikh Mohammed Bin Rashid Al Maktoum.

In another messages, a person named Noor wrote: “Why you are publishing lies? Shamsa and Latifa are alive. Why are you misleading people saying they are killed?”

There has not been any reply to the email from ‘Noor’.

According to diplomatic analysts, as Princess Haya and the members of the Jordanian royal family are trying to use their connections in the British royal family in successfully extorting billions of dollars from the Dubai ruler, this battle would ultimately jeopardize the existing relations between London and Dubai.