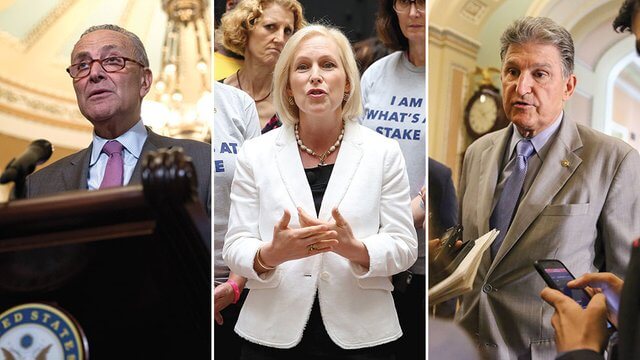 Democrats are splintering over their tactics in the wake of a second allegation against Supreme Court nominee Brett Kavanaugh.

Progressive outside groups and a growing number of senators are calling for Kavanaugh to withdraw his nomination following two sexual misconduct allegations that have left considerable doubt over his Supreme Court confirmation — which was considered a sure thing earlier this month.

Democratic leaders have stopped short of such calls.

Though opposed to Kavanaugh’s confirmation, they are focused on demands that the FBI investigate the charges and that the GOP provide a fair hearing for Christine Blasey Ford, who is set to testify Thursday about her allegation that Kavanaugh sexually assaulted her in the early 1980s, when the two were teenagers.

Asked about calls for Kavanaugh to withdraw, Sen. Dick Durbin (D-Ill.) said that he believed Kavanaugh deserved to have the hearing on Thursday, which will give him a high-profile perch to defend himself.

“I have my feelings about this, but basic fairness requires that both sides be allowed to talk,” said Durbin, who visibly grimaced when asked about the calls for Kavanaugh to withdraw his nomination.

Senate Minority Leader Charles Schumer (D-N.Y.), during both his weekly press conference and on remarks on the Senate floor, called for additional witnesses to testify on Thursday and urged Republicans to support an investigation into Kavanaugh’s background.

“In the face of multiple allegations against Judge Kavanaugh, the FBI should re-open the background check investigation, and we should conduct a hearing where the appropriate witnesses are called and respect given both to the accuser and the accused,” Schumer said from the Senate floor.

A Democratic aide brushed aside questions about the difference in rhetorical tactics, positing that Democratic senators who are opposed to Kavanaugh also, in theory, would support him withdrawing his nomination.

“[The] FBI investigation is what will help ensure the kind of ‘fair’ process that Kavanaugh and the Republicans are demanding,” the aide added.

In a sign the Democratic tactics could be putting some pressure on centrist Republicans, Sen. Lisa Murkowski (R-Alaska), one of the key undecided votes, said Tuesday that she would support an FBI investigation, telling reporters that it would “certainly clear up all the questions.”

Democrats can’t block Kavanaugh’s nomination on their own because Republicans hold a 51-49 majority in the Senate. Senate Majority Leader Mitch McConnell (R-Ky.) said on Tuesday that he is “confident” Kavanaugh will be confirmed and that Republicans will “win” the Supreme Court fight.

But Kavanaugh is facing growing demands by progressives and outside groups to withdraw his nomination after the second sexual misconduct allegation. Deborah Ramirez says Kavanaugh exposed himself in front of her during a party at Yale University, an allegation denied by Kavanaugh during a television interview on Monday night.

“It is time to end these disgusting attacks and for Brett Kavanaugh’s nomination to be withdrawn,” Shaunna Thomas, the executive director and co-founder of UltraViolet Action, said in response to GOP criticism of Ford and Ramirez.

Liberals, including two possible presidential candidates in Sens. Kirsten Gillibrand (D-N.Y.) and Bernie Sanders (I-Vt.), are echoing the calls from the interest groups.

“One credible sexual assault claim should have been too many to get a lifetime appointment to the Supreme Court and make decisions that will affect millions of women’s lives for generations. Two is an embarrassment. It’s time for a new nominee,” Gillibrand said in a tweet after The New Yorker published the second allegation.

Democratic Sen. Jeff Merkley (Ore.) added that Kavanaugh’s “pattern of conduct, extreme views, and failure to be fully truthful and forthcoming under oath” means he should not be confirmed to the Supreme Court.

“For the good of the country and the integrity of the court, he should step aside,” said Merkley, who has gotten attention as a potential dark horse 2020 candidate because of his ties to the party’s progressive base.

Democrats hope the public backlash against the nomination will help build unity in their caucus while causing GOP defections.

But the calls for Kavanaugh to withdraw his nomination carry risks for Democrats given the plight of a handful of members, undecided on Kavanaugh’s nomination, running for reelection this year in states easily won by President Trump in 2016.

“I think Judge Kavanaugh should have the chance to clear his name, the same as they should have the opportunity to be heard,” Manchin said, appearing to refer to his accusers.

Manchin’s reelection race, along with contests for Sens. Heidi Heitkamp’s (D-N.D.) and Joe Donnelly’s (D-Ind.) seats, could decide the next Senate majority.

Democratic Sen. Tim Kaine (Va.), asked about the calls for Kavanaugh to withdraw, said he wanted to see Kavanaugh testify.

Kaine opposes Kavanaugh’s nomination and said the hearing won’t change his mind, but he stressed that it was important for understanding Kavanaugh’s character.

“I think you have to understand the character of the person you’re voting on,” he said, “and I think the public needs to see that.”