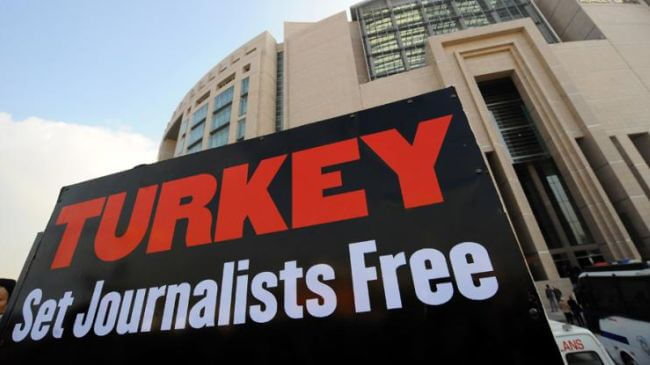 Do I really need to remind my readers about Council on American-Islamic Relations (CAIR)? Not at all, as my readers already are aware of CAIR’s militancy connections and its agenda of spreading radical Islam in the West. Now the Executive Director of CAIR, Nihad Awad told Qatari television network Al Jazeera “He [Jamal Khashoggi] intended to launch an organization to foster democracy, raise the awareness of the people, interest in freedom of expression and the press, and monitor the performance of democracy by governments and the organizations of civil society.”

Let me now remind my readers, this Nihad Awad and his nefarious CAIR have hailed Turkey’s Islamist-fascist Recep Tayyip Erdogan as a “hero to democracy” while the world knows, Erdogan is the world’s worst jailer of journalists.

According to Elana Beiser, Editorial Director of the Committee to Protect Journalists (CPJ), “Even as Turkish President Recep Tayyip Erdoğan has been the fiercest critic of Saudi Arabia for the murder of Khashoggi, his government continued to jail more journalists than any other on the planet. CPJ found at least 68 journalists jailed for their work in Turkey, which is slightly lower than previous years. In the course of the year, dozens more have been jailed or released, as prosecutors continue to seek arrest warrants and apply new charges, and courts ordered some journalists released pending trial and acquitted others. For the third consecutive year, every journalist imprisoned in Turkey is facing anti-state charges.

“Erdoğan began the crackdown before the 2016 failed coup attempt, but afterward intensified it, shutting down more than 100 news outlets by decree. Those on the periphery of the journalistic profession are also vulnerable. CPJ’s list of jailed journalists does not include 13 staff from Gün Printing House, including its owner, a security guard, and several machine operators, who were jailed. Their “crime” is evidently printing Özgürlükçü Demokrasi, a pro-Kurdish daily paper that the government took over and eventually shut down. Several journalists affiliated with the paper, who are included in the prison census, are detained on accusations of supporting the banned Kurdistan Workers’ Party, or PKK. Dozens more in Turkey are accused of affiliation with PKK or with an alleged terror group run by exiled preacher Fethullah Gülen, which the government blames for the attempted coup.”

Recep Tayyip Erdogan has jailed more than 68 journalists in the past year and for the third consecutive year; every journalist imprisoned in Turkey is facing anti-state (sedition and treason) charges.

Nearly 200 opposition newspapers and media, such as Today’s Zaman, have been taken over or shuttered – 189 in total. Only press outlets favorable to Erdogan and his ruling party have been allowed to continue operations.

Erdogan blames Gulen for a failed 2016 coup attempt, which prompted his crackdown on journalists, academics and others. Turkey still demands that the United States send Gulen, a permanent U.S. resident, back to Turkey where he would face an uncertain fate.

John Rossomando of The Investigative Project on Terrorism has excellently described Nihad Awad and his CAIR saying, “There are a lot of anti-democratic abuses in the world, but if Awad’s new venture can’t acknowledge the reality of life under Erdogan in Turkey, then he does not truly care about “freedom of expression and the press, and … the performance of democracy by governments and the organizations of civil society.”

I fully agree with John Rossomando. Yes, for the reasons we never can believe Nihad Awad or his Council on American-Islamic Relations (CAIR) have any interest in democracy – we also cannot believe – Jamal Khashoggi ever had cared about democracy as well. These are the appeasers and lapdogs of fascists – more precisely radical Islamic fascists.