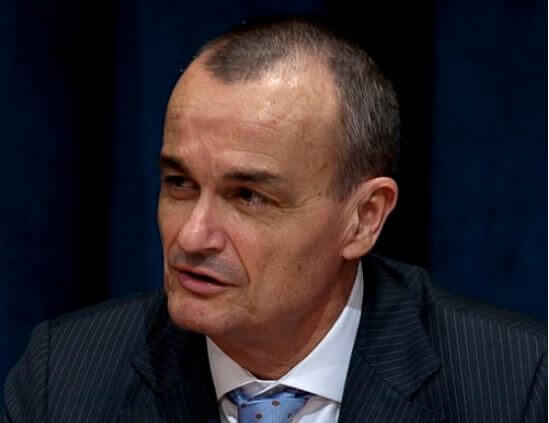 One tool of verbal demonization that is extremely difficult for Israel to combat is accusations of crimes it supposedly will commit in the future. These are far more difficult to contest than outright lies about current events. An example of this kind of manipulative lie is a remark in an interview by the outgoing French ambassador to the US, Gérard Araud, in which he said that Israel will officially be an apartheid state in the future.

Outgoing French ambassador to the US Gérard Araud is a long-time anti-Israel basher and vocal antisemite.  In a parting interview with the Atlantic, he said that Israel will have to either make Palestinians totally stateless or turn them into its citizens. “They won’t make them citizens of Israel,” he said. “So they will have to make it official…which is an apartheid. There will be officially an apartheid state. They are in fact already.”

Peculiar semantics aside, Araud’s slander is smart. It levels an accusation about what may happen in the future, which is extremely difficult to refute. If someone tells an individual, “You are a rapist,” proof can be demanded. But if one says instead, “You will be a rapist someday,” nothing has to be proven. The falsehood of the hateful accusation is not made fully clear until the accused person dies. By placing his emphasis on Israel’s future ignominy as an apartheid state, Araud feels comfortable throwing in the aside that Israel is already such a state.

Of all people, a French ambassador should be among the last to slander Israel in this way.

After France’s defeat by the Germans in 1940, the elected parliament of the French Third Republic ended its existence by naming Philippe Pétain head of state, and subsequent governments turned France into a country that was far worse than an apartheid state. Vichy France, still autonomous, banned Jews from many professions, including the civil service. Eventually it confiscated Jewish businesses entirely. It held tens of thousands of Jewish refugees in concentration camps. The Vichy regime handed over many tens of thousands of Jews to the Germans, who then deported them to their deaths.

There was massive wartime collaboration between the French and the Germans. Post-war French governments did not want to assume responsibility for Vichy’s acts. This was the case even though Pétain had come to power legally. Socialist president François Mitterrand, who served from 1981 to 1995, was once a Vichy employee. He changed sides and joined the resistance in 1942. He was clearly well aware of Vichy’s crimes, yet refused to accept France’s responsibility for them.

It was only in 1995 under Jacque Chirac, the center-right successor to Mitterrand as president of the Fifth French Republic, that the country’s official policy finally changed. In July of that year, Chirac admitted France’s role in the murder of Jews, whom it had not protected and instead delivered to their executioners. In a memorial ceremony, he said France had given the Nazis assistance in arresting Jews as a step on the way to their murder. He said: “We maintain toward them an unforgivable debt.”

Araud’s latest incitement against Israel comes many years after his first. Freddy Eytan, a former Israeli ambassador who is currently with the Jerusalem Center for Public Affairs, recalled earlier misbehavior by Araud. The latter was appointed ambassador to Israel in 2003, but had not yet presented his credentials when he said: “Sharon is a thug and Israel is paranoid.”  This almost cost him the job.

When Yasser Arafat died in a French hospital in 2004, France bestowed military honors upon him. By that time, it had become known that Arafat – even after winning the Nobel Peace prize – had personally signed off on documents detailing how much money Palestinian murderers of Israelis should receive. These documents were found after Orient House, formerly the PLO’s seat in Jerusalem, was taken over by Israel in 2001.

Araud was ambassador to Israel at the time. He remarked that Israelis disturbed by the French government’s bestowing of honors on Arafat, a mass murderer of their countrymen, demonstrated an anti-French neurosis.

After heavy criticism of his more recent remarks in the Atlantic, Araud explained via tweet that he was referring to the West Bank and not to Israel, which is not an apartheid state. Leaving aside the fact that 95% of the West Bank’s Palestinians have lived under the rule of the Palestinian Authority, rather than Israel’s control, since 1996, his tweets are incompatible with his statements in the interview. His explanation makes no sense.

Araud’s remarks in the interview join various other paradigms of verbal demonization that are based on accusations about future criminal actions. One is that Israel intends to destroy the al-Aqsa Mosque on the Temple Mount. Nadav Shragai, an Israeli journalist specializing in the history of the Palestinian-Israeli conflict regarding Jerusalem, says: “This canard is disseminated by leading Palestinian, Arab, and Muslim groups and individuals. Haj Amin al-Husseini, the pre-war Grand Mufti of Jerusalem, was the first to promote this slander in the 1920s. It was part of the vast antisemitic activities of this ally of Hitler.”

Shragai added: “The ‘al-Aqsa is in danger’ lie has expanded greatly since 1967. It is propagated by official Iranian sources – al-Qaeda, Hamas, Hezbollah, etc. Akrama Sabri, former Mufti of Jerusalem appointed by the Palestinian Authority, is another leading disseminator of the al-Aqsa libel.”

Another accusation about future actions by Israel was made by German Literature Nobel Prize winner Günther Grass. He claimed in a hate poem – without providing any proof – that Israel is planning to commit genocide against the Iranian people with nuclear bombs. This leftwing poet, who in his youth was a member of the Waffen SS, must have known that in fact, it is Iranian leaders who have repeatedly and openly threatened Israel with genocide. Yet he suggested the reverse.

Grass’s poem was published by major European dailies, including the German Süddeutsche Zeitung, the Italian La Repubblica, the BritishGuardian, the Spanish El Pais, the Danish Politiken, and the Norwegian Aftenposten. Such extensive republication of a poem is highly unusual. The most likely explanation is a common thread of strong anti-Israel bias among the papers’ editors.

Yet another unfounded accusation about the future was made by former French right-wing PM François Fillon. In 2014, he claimed that Israel is a threat to world peace because it has not helped to create a Palestinian state.

These kinds of accusations are far more difficult to contest than lies about contemporary issues. That does not mean, however, that one should not make the effort.