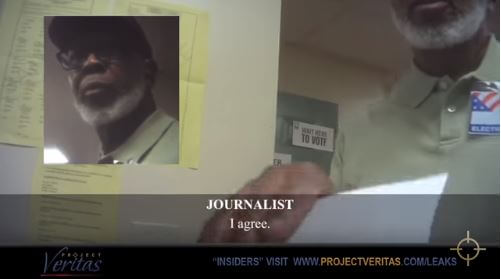 Recently concluded midterm election in the US was filled with serious manipulation, vote rigging and direct influence of the polling officers in getting the Democratic candidates winner. In Georgia, a poll worker was captured on video telling an undercover journalist posing as a voter that he should vote Democrat, because the party has “a better platform.”

In the latest in a Project Veritas series revealing “secrets and lies from political campaigns in 2018,” the poll worker, identified as John Hill, told the undercover journalist not to inform anyone of his recommendation.

“But the things is right now,” Hill said, lowering his voice, “the Democrats has a better platform for you and for me.”

Project Veritas pointed out that according to Georgia law on electioneering, “poll workers and election judges cannot solicit a vote for a particular candidate. Telling someone how to vote is usually deemed a ‘solicitation’ of a vote.”

Hill initially told the worker he was not telling him who to vote for, but he said “America is at a dark age right now.”

The poll worker asked the journalist posing as a voter to think about the direction the country is headed “with the rich,” pointing downward.

Another Georgia election worker, James Mars, told the undercover journalist he had voted Democratic while admitting he was not allowed to disclose that information.

Later, met outside the polling place by Project Veritas founder James O’Keefe, Mars denied he told any voters how he had voted.

Last week, a video featured a staffer for Florida gubernatorial Democratic candidate Rep. Andrew Gillum referring to Florida as a “f***ed up state” and a “cracker state” in which the campaign must appeal to “white guilt.”

The staffer admitted that while Gillum presents himself as a moderate, he’s a “progressive” and “part of the crazy, crazy, crazies.”

WND also reported a Project Veritas’ video exposed the far-left views of the Democratic candidate in a tight race for retiring Republican Sen. Jeff Flake’s seat in Arizona, Rep. Kyrsten Sinema.
Lauren Fromm, a Sinema field organizer, confessed to an undercover journalist her candidate is too far to the left for Arizona: “She is pro-choice, she’s very liberal, she’s progressive. But she doesn’t in this election want to draw too much attention to being progressive.”

Madison Snarr, another field organizer, admitted Sinema “had to play centrist to move up, become powerful.”