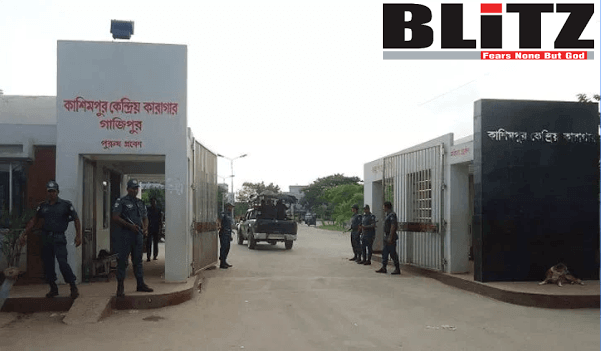 Sitting inside prison, members of banned militancy outfit Jamaatul Mujahedin Bangladesh (JMB) are contacting their fellow jihadists in Bangladesh as well as members of Hizbul Mujahedin in India. According to credible source, condemned JMB jihadists named Arif, Nizam and others are being cooperated by a fellow jihadist and condemned convict named Abul Bashar (handed death penalty in the Pilkhana massacre case) and illegally using mobile phones from inside Kashimpur Central Jail, Part-1 in Gazipur district in Bangladesh.

Abul Bashar has been working as a handler of JMB inside Kashimpur Central Jail, Part-1, where he has successfully recruited a large number of prison inmates, including condemned convict Major (sacked) Mohammed Arif Hussain. Sitting inside condemned cell, Maj (Sacked) Arif Hussain was giving physical training to JMB men while he also was holding secret meetings, which were coordinated by Bashar. Condemned war criminal Mobarok Hussain has also joined JMB.

The source further said that for past few years JMB has been expanding its network and influence inside various prisons in Bangladesh. As a result, JMB men are cooperated by the prison authorities in holding congregation during the Eid, as they observe this festival together with Saudi Arabia. Each year, during the Eid congregation, JMB men would read jihadist sermons and pronounce holy war against secularism and democracy. Despite reports in the newspaper, there had been no action from the higher authorities in the Directorate of Prison in stopping the culture of granting special privileges to the JMB men in holding prayers separately and uttering jihadist and anti-state sermons.