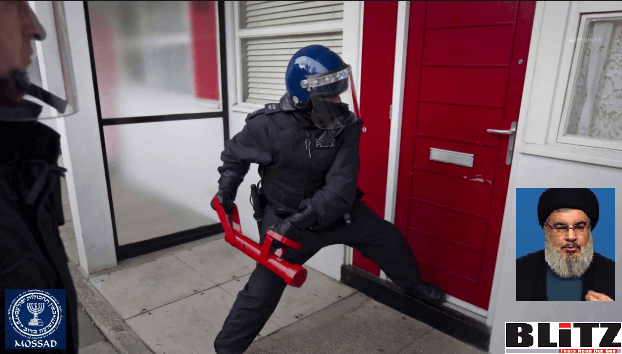 Should it not be unearthed, London would have experienced one of the worst-ever terrorist attacks in its history. But most importantly, the British authorities had kept this huge recovery absolutely secret for long four years.

According to information, this huge stock of explosives was unearthed from an underground warehouse, where Lebanon-based militancy group Hezbollah had stockpiled it with the plan of terror attack on Britain. Most importantly, British intelligence agencies were in the total dark about the existence of this ‘bomb factory’.

It may be mentioned here that, this huge stock of explosives contained a total of three metric tons of ammonium nitrate, which was discovered on the outskirts of London. This stock is more than that used in the 1995 Oklahoma City bombing that killed 168 people – stashed in ice packs.

The London cell was uncovered by MI5 and the police in September 2015. The British were reportedly tipped off by the Mossad. The suspicion is that the British government kept the discovery secret because they were heavily committed to the Iran nuclear deal brokered by President Barack Obama, which was agreed to the following month.

According to researcher and analyst Melanie Phillips, “[This] deal was a baleful development. Supposedly aiming to prevent Iran from ever developing nuclear weapons, it would actually enable it to do so a few years down the line”.

She said, “Worse, by lifting sanctions it funneled millions of dollars into Iran. This enabled the regime to fund Hezbollah and global terror; expand its predatory influence in Lebanon, Gaza, Yemen, and Iraq; and continue developing inter-continental ballistic missiles”.

Why the British secret service were in dark?

It is a million-dollar question as to why the British secret services, including MI5 and MI6 were in total dark on the existence of this massive stock of explosives, while according to experts, this stock might have been built in some months. Unless Israeli intelligence agency Mossad had notified Britain about this secret ‘bomb factory’, most definitely Britain would witness a huge catastrophe caused by Hezbollah’s jihadist attack.

How the stock had entered Britain?

Although according to media reports, narcotics consignments are regularly entering the United Kingdom in various ways, it is a matter of grave concern seeing the British security and surveillance system is weak enough in even detecting the existence of such huge stock of explosive right in the London suburb.

Rejecting that British secret services were at dark on the existence of such massive stock of bombs, an expert said, Britain has unfortunately become such a country where criminals are continuing various forms of notorious activities and the law enforcing or intelligence agencies are mostly ignoring such important issues.

According to the experts, while London has already turned into the capital of laundered and dirty money, now possibly it is going to emerge as the launch-pad of international terrorism.