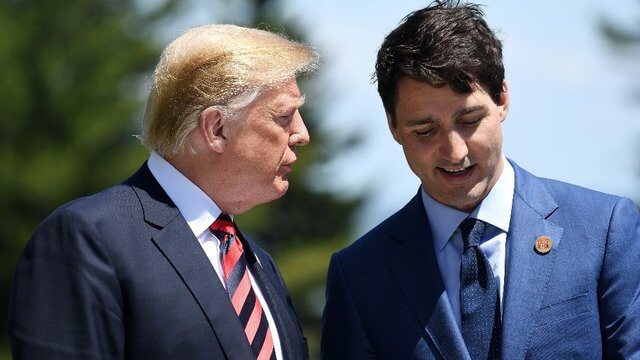 The U.S. and Canada have reached a deal on an updated North America Free Trade Agreement (NAFTA) after negotiators in Washington and Ottawa worked furiously into the night to meet a self-imposed midnight Sunday deadline.

The White House announced on Sunday night that Canada, Mexico and the United States have reached a deal to preserve the three-nation agreement.

In a joint statement, U.S. Trade Representative Robert Lighthizer and Canadian Foreign Affairs Minister Chrystia Freeland said that the new deal will “give our workers, farmers, ranchers and businesses a high-standard trade agreement that will result in freer markets, fairer trade and robust economic growth in our region.”

“It will strengthen the middle class, and create good, well-paying jobs and new opportunities for the nearly half billion people who call North America home,” the two trade ministers said.

An official said the new agreement will be called the United States, Mexico, Canada Agreement, or USMCA.

“This is a fantastic agreement for the United States and Canada and Mexico and a great win for the president,” said a senior administration official during a call with reporters.

Trudeau is expected to make a formal announcement on Monday. The White House is expected to send the text of the agreement to Congress before the midnight deadline.

Reactions were quick to pour in following the announcement.

Senate Finance Committee Chairman Orrin Hatch (R-Utah), who has been critical of some of Trump’s trade moves in the past, said he is pleased Canada will remain in the new trade deal.

“NAFTA is a proven success for the United States, supporting more than 2 million American manufacturing jobs and boosting agricultural exports to Canada and Mexico by 350 percent,” Hatch said.

“Maintaining a trilateral North American deal is an important prerequisite to preserving and extending those gains and the Trump administration has achieved that goal,” he said.

AFL-CIO President Richard Trumka said after reading the text that “too many details still need to be worked out before working people make a final judgment on a deal.”

“Our history of witnessing unfair trade deals destroy the lives of working families demands the highest level of scrutiny before receiving our endorsement,” Trumka said.

House Ways and Means Committee ranking member Richard Neal (D-Mass.) said the “the bar for supporting a new NAFTA will be high.”

“NAFTA has had many critics over the years and its flaws are well-known,” Neal said. “Like me, many of my colleagues did not support the deal originally. And those who did will have serious questions that they need answered before doing so again.”

After a week of especially intense work, the U.S. and Canada reportedly managed to grind out a deal on the toughest issues, including providing more access to the Canadian dairy market.

Mexican President Enrique Pena Nieto said he will present the text of the deal Sunday night to the Mexican Senate. The three nations put a last-minute rush on the deal to ensure that Pena Nieto could sign the agreement before he leaves office on Dec. 1.

Congressional lawmakers and U.S. business groups had urged the Trump administration to work with Canada to preserve the three-nation framework of the pact, which was completed under President George H.W. Bush and ratified under President Clinton.

“Manufacturers are extremely encouraged that our call for a trilateral agreement between the United States, Canada and Mexico has been answered,” said Jay Timmons, National Association of Manufacturers (NAM) president and CEO.

“What’s more, as the United States works to put an end to China’s cheating and unfair trade practices, we are better off united with our North American allies,” Timmons said.

Trump threatened last week to push Canada out of the deal and had seemingly given up on the weekend deadline while threatening Ottawa with auto tariffs if a deal couldn’t be reached.

Even with the deal, the U.S. has not removed steel and aluminum tariffs that have hit Canada and Mexico.

Officials on the call said that there is a side agreement to begin discussions on the tariffs — 25 percent on imported steel and 10 percent on aluminum — to reach an deal to eliminate the tariffs.

Chapter 19 gives the United States, Canada and Mexico the right to challenge each others’ anti-dumping and countervailing duty decisions before a panel.

One official said the negotiated levels of market access came out better than what the Obama administration negotiated in the Trans-Pacific Partnership (TPP).

Another official said that the new deal has stronger labor provisions, intellectual property protections, including 10 years of protections on certain pharmaceutical patents, environmental rules and rules of origin for cars than the TPP.

The U.S. managed to keep a version of its sunset clause meaning the agreement will come up for review every six years, which officials said would keep the deal up to date as technology and other trade issues change over the years.