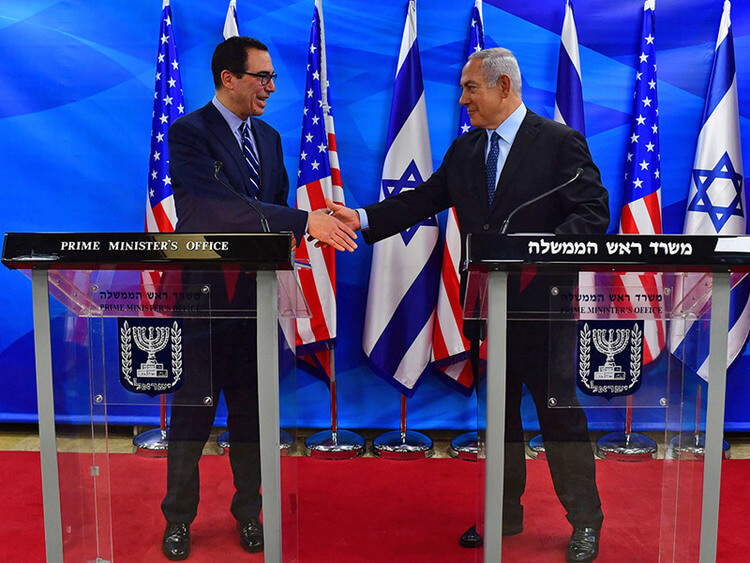 Prime Minister Benjamin Netanyahu, this morning (Sunday, 21 October 2018), at the Prime Minister’s Office in Jerusalem, met with US Treasury Secretary Steven Mnuchin and said the following at the joint statements:

“Good morning, Secretary Mnuchin, Steve, welcome again to Israel. This is your second official visit. We have a lot to talk about and we’ve begun doing that.

First, let me say that the US-Israel alliance under President Trump has never been stronger. And I appreciate that alliance and the strengthening of our relations in every field: in intelligence, in security cooperation, in trade, in economic cooperation and of course, in our common approach to preventing aggression in this region. And this is what is going to occupy a great deal of our discussions today – how to stop Iran’s dual aggression: Its quest for a nuclear arsenal and its quest for a conventional arsenal and its plans of conquest in the Middle East.

The JCPOA effectively enabled Iran to pursue both paths of aggression: rather than blocking their path to atomic bomb, it actually paved their way to an entire nuclear arsenal. And it gave them, to boot, billions, hundreds of billions of dollars in cash, in credits, in investments, which enabled them to fund their growing aggression in the region. We see that aggression in every part in the Middle East. We see it of course in our northern border in their attempts to entrench militarily in Syria, their attempts to bring deadliest weapons to Lebanon, to launch aggression through their proxies in Gaza and elsewhere.

We have aggressive Iranian regime that has used the JCPOA to further that aggression to unbelievable heights. And that is why we welcome President Trump’s bold [and courageous?] decision to get out of the JCPOA and the focus of our discussions today is ramping up the pressure, ramping up the pressure against the world’s foremost terrorist regime – the aggressive regime in Tehran.

We have other things to discuss too – the world economy, Israel is a part of it; the American economy, our cooperation in these two areas, which are very promising. I think Israel and the United State prove the resilience of free economies, which give freedom to their peoples for ingenuity, entrepreneurship, creativity. We have the same minds and we have the same heart. We have the same interests and the same values.

And in this regard, I want to thank you, Steve, for the work that you’ve been doing in the Treasury both to arrest Iranian aggression and also to advance the unbelievable partnership between Israel and the United States. So welcome once again to Jerusalem.”

In response to a journalist’s question regarding Khan al-Ahmar, Prime Minister Netanyahu said [translated from Hebrew]:

“Khan al-Ahmar will be evacuated. This is the decision of the court. This is our policy and it will be carried out. I have no intention of delaying this until further notice, contrary to what is being reported, but for a short period.

The length of time in which it will be possible to try to evacuate it by agreement will be decided upon by the Security Cabinet. I will convene it today. We will decide; it will be short and I believe it will also be by agreement.”