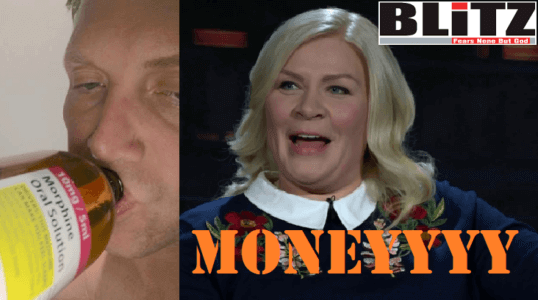 When a person becomes senselessly greedy and turns completely crook, they become absolutely blind and the human being in them get transformed into monsters. This has exactly happened with a controversial Finnish woman named Tiina Jauhiainen and her befitting cohort – a convicted fraud, drug addict, pervert and scoundrel of the highest order, named David Haigh.

Tiina Jauhiainen was known as a noble individual who has been “fighting” for Sheikha Latifa of Dubai. But the world saw her ugly face when a report in Blitz had reached thousands of readers just within the span of 24 hours.

In the Blitz report, a video clip is also published where it is seen that Tiina Jauhiainen and her cohort David Haigh [the British national who was imprisoned in the United Arab Emirates on charges of fraud] are talking about making “lots” or “pots pots of cash” by selling the Sheikha Latifa case.

It may be mentioned here that, the video of Sheikha Latifa on the video sharing and social media sites were edited and doctored by Tiina Jauhiainen and uploaded on YouTube. Tiina did this with the nefarious agenda of becoming a hero in the eyes of the people and later making tons of money by asking for donations. This clearly is a racket of scammers – Tiina Jauhiainen and David Haigh are already caught red-handed by our investigative team and we are holding more evidence.

Ever since Sheikh Latifa was forcibly returned to Dubai, Tiina and David jointly are making false claims of being the copyright holder of Latifa’s photographs and videos. Commenting on this, copyright lawyers said, “No one in the world can claim copyright over a video which had been released by someone in distress. If Tiina Jauhiainen or anyone else is making such claim, they should be held responsible for luring Sheikha Latifa in making such video much before she actually had left Dubai. There should be an international investigation into the case of Tiina”.

But Tiina Jauhiainen even had much worst plot in her mind. According to a report published in Blitz, Tiina Jauhiainen actually had even a much worst plot against Sheikha Latifa, should she somehow manage reaching the United States. Much before leaving Dubai, Tiina was contacting some of her old contacts in Spain who are connected to the underworld. Their plot was to abduct Sheikha Latifa, murder Hervé Jeubert and then start extracting millions of dollars from the Dubai ruler by holding the princess hostage. To accomplish this notorious plot, Tiina did her best in somehow winning the confidence of Sheikha Latifa, where she actually had succeeded.

Another source said, in private life, Tiina Jauhiainen is a lesbian, who even made attempts of turning the Dubai princess into a partner of her lesbianism.

A fresher plot of Tiina-David racket

After being successful in extracting a huge amount of cash from Sheikha Latifa, Tiina Jauhiainen and her cohort David Haigh are jointly making a fresher plot of luring some of the members of the royal families in the United Arab Emirates, Saudi Arabia, Kuwait, Qatar, and Bahrain. Their goal is not “liberating” those females from the “dark isolation”. Instead, they have the notorious plot of holding them hostage, should any finally succeed in fleeing and then extract millions of dollars as ransom from the targeted royal family.

The duo also is trying to establish contact with Princess Haya Bint Al Hussein and take her consent in beginning a “campaign” in her favor. According to crime experts, scammers like Tiina and David always look for scopes of making money. They might have thought Princess Haya case as much profitable and feasible than that of Latifa. These are fraudsters and they can do anything for money”.