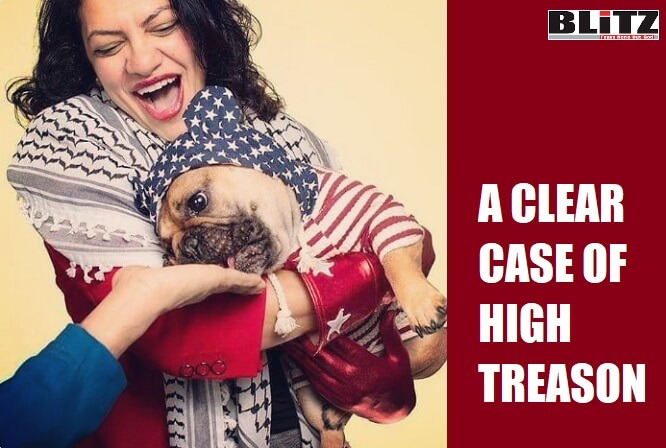 Pro-Hamas and pro-jihadist congresswoman Rashida Tlaib had committed high treason by demonizing the flag of the United States of America as well as the Americans.

On the occasion of the World Keffiyeh Day this Democratic Party members expressed solidarity with the Palestinian terrorism by wearing Keffiyeh and had published a number of photographs on Twitter. In one of those to post in honor of it was congresswoman Rashida Tlaib, who tweeted this Note that there is also an American flag … draped around the dog licking out of someone’s hand.

What did this mean? Rashida Tlaib on purpose has got this photograph with a dog to disrespect America. She has clearly tried to portray the United States as a dog and the hand feeding it wears blue-color shirt Arab dress, meaning the United States is being treated like a dog by its allies in the Middle East.

While Rashida Tlaib is openly disrespecting the United States of America and the flag, another notorious pro-jihadist Muslim member of the congress, Ilhan Omar is regularly giving statements in favor of radical Islam and jihad. And most importantly, media predictions say, no one can defeat either Rashid Tlaib or Ilhan Omar in the upcoming elections as well. Meaning, those states are already captured by the Islamists and jihadists.