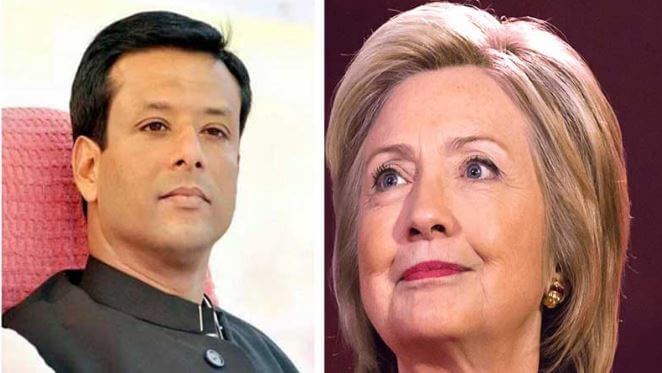 It is no secret, the Clintons – Bill Clinton and Hillary Clinton are giving old grudge against Bangladesh Prime Minister Sheikh Hasina for a particular reason. Back in 2017, US newspaper The Daily Caller published an exclusive report disclosing the reason behind former Secretary of State and Democratic Party’s presidential candidate Hillary Clinton’s grievance towards Bangladeshi Prime Minister Sheikh Hasina. This grudge in Hillary began when Bangladesh’s Anti Corruption Commission (ACC) initiated investigation into the multiple charges of financial mismanagement at Grameen Bank, beginning in May 2012. Prof Muhammad Yunus, a major donor of the Clinton Foundation was the managing director of the bank. Although The Daily Caller had referred to a link of Bangladesh’s Ministry of Finance, the link had already been removed by the Bangladesh side for unknown reason.

As part of her tactic of blackmailing the Bangladeshi Prime Minister, Hillary Clinton had used the State Department in putting pressure on Sajeeb Ahmed Joy (official name of Sajeeb Wazed Joy), a permanent resident of the US.

Joy recalled the account of the threatened IRS (Internal Revenue Service) audit to The Daily Caller. The allegations mark the first known instance in the U.S. that Hillary Clinton’s Department of State used IRS power to intimidate a close relative of a friendly nation’s head of state on behalf of a Clinton Foundation donor.

He said, it was “astounding and mind boggling” that senior State Department officials between 2010 and 2012 repeatedly pressured him to influence his mother (Prime Minister Sheikh Hasina) to drop the commission’s investigation (against Prof Yunus).

“They threatened me with the possibility of an audit by the Internal Revenue Service,” he said. “I have been here legally for 17 years and never had a problem. But they said, ‘well, you know, you might get audited.’”

“They would say over and over again, ‘Yunus has powerful friends’ and we all knew they were talking of Secretary Clinton. Everybody knew it was Mrs. Clinton,” Joy told The Daily Caller.

Prime Minister Sheikh Hasina originally disclosed in general terms the pressure exerted on her son at a February 2017 reception in Munich. Dhaka’s English newspaper the Dhaka Tribune reported, “Prime Minister Sheikh Hasina has said her son Sajeeb Wazed Joy had to face pressure from the US State Department to keep Muhammad Yunus as the Grameen Bank managing director.”

“Hillary Clinton phoned me and exerted the same pressure. Even the U.S. State Department summoned my son Joy three times and told him that we would face trouble,” Hasina added.

The World Bank also decided to rescind a $1.2 billion loan to Bangladesh while the IRS was pressuring Joy in 2012. The money was requested in order to build the Padma bridge. The World Bank leveled bribery charges against two Canadian officials, but a Canadian court later acquitted both individuals.

Former Bangladesh Foreign Minister Dipu Moni, who twice met with then-Secretary of State Clinton, told The Daily Caller it was apparent there were links between the World Bank loan cancellation and Yunus.

“Whether there was any abuse by the U.S. Government or the secretary of state, that I cannot say,” Dipu Moni said. “I can only say we saw two facts: One was the communications from the State Department, and then the other one was the withdrawal of World Bank’s loan.”

Sajeeb Ahmed Joy had received threats from all levels of the State Department.

“The threats came from all levels. It came from the U.S. Embassy in Bangladesh to pretty senior officials within the State Department.”

Joy regularly met many State Department officials as he lived near the nation’s capital. He considered many to be friends and colleagues, but the tone and substance of the discussions radically changed beginning in 2010.

“Previously, we pretty much discussed many issues, things like trade, finance or national security. But then, the only thing they would be harping on was Yunus. They had one obsession, to save Muhammad Yunus.”

Clinton met with Yunus three times as secretary of state while the Bangladesh government investigation was underway, according to an August 2016 Associated Press report on Clinton Foundation donors.

Throughout the Bangladesh government’s investigation, “He (Yunus) pleaded for help in messages routed to Clinton, and she ordered aides to find ways to assist him,” AP reported.

Hillary Clinton also supported Yunus in other ways. The U.S. Agency for International Development, part of State Department, partnered with the Grameen Foundation for a $162 million micro-finance project in 2009. The agency separately awarded $2.2 million to the foundation.

Yunus first ran into trouble when a 2010 Norwegian documentary charged  that he diverted nearly $100 million of Grameen Bank funds to finance his private enterprises. Yunus presently owns more than 50 private and nonprofit companies, ranging from Grameen Telecom to firms in the fashion industry and even a yogurt company.

Something related needed to be said here. During making of the documentary by Danish filmmaker Tom Heinemann, I have actively helped him with several data and information and was in regular contact with Tom Heinemann.

The Clintons also frequently hosted Yunus at their foundation’s annual Clinton Global Initiative galas in New York. He was a heavily promoted as a CGI speaker nearly every year from 2008 to 2016, according to the foundation’s website.

As a New York Senator, Clinton successfully pushed Congress to award him the Congressional Gold Medal. Then-President Obama awarded him the Presidential Medal of Freedom, the nation’s highest civilian award, in 2010.

All of us are aware of Hillary Clinton’s vindictive character. We know the way she has been playing dirty with President Donald Trump and his family members and his aides. With this understanding, we can say – Hillary Clinton may use her contacts with the United States Congress, where Democrats are now having a majority. She may even use some channels in exerting influence on the House Republicans as well as the US Senate, State Department and even the White House. But, before listening to any allegation against Bangladeshi Prime Minister Sheikh Hasina, the Trump administration may take Hillary’s old-grudge into account.