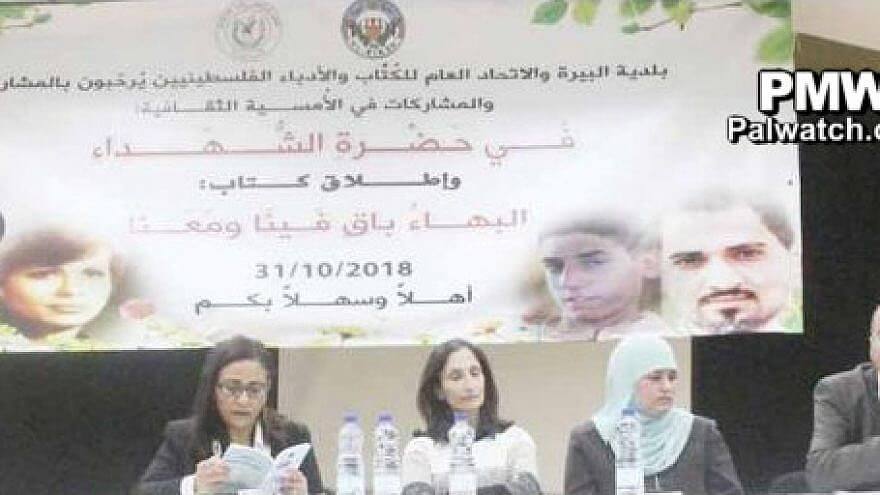 Palestinian Media Watch has reported on the numerous events at which the Palestinian Authority has honored terrorist murderer Baha Alyan who together with an accomplice boarded a bus in Jerusalem in 2015 and shot and stabbed passengers, murdering three Israeli civilians.

Before choosing to murder Israelis, Baha Alyan, who was killed during the attack and classified by the P.A. as a “Martyr,” organized a “human reading chain” in Jerusalem at which Palestinians lined up to read books. Since his terror attack, the P.A. has been promoting murderer Alyan as a role model for Palestinians to encourage reading. It doesn’t bother the P.A. that Alyan was a murderer. On the contrary! It was only after his terror attack that he was turned into a role model.

So what is the P.A.’s real message?

Since Palestinian murderers have been honored for years as role models by the P.A., the P.A.’s new added message is the importance of reading. The importance of killing has already been established. So the P.A. chose a terrorist to pass on and emphasize the new message: Reading, like killing Israelis, is also a positive value in the P.A.

A recent public library event in the P.A. makes this clear.

The Public Library in the El-Bireh Municipality held a “cultural evening” called “In the Presence of the Martyrs” at which it honored no less than four terrorists—three of them murderers—and among them Baha Alyan.

The above photo from the library event shows a poster welcoming the participants. The poster is adorned (from left to right) with the faces of four terrorists, three of them murderers:

Imad Awadallah: Responsible for kidnapping and murder of Israeli soldier (1996), and for suicide bombing in which three were murdered and 48 wounded. (1997)

Dalal Mughrabi: Led the most lethal terror attack in Israel’s history, when she and other terrorists hijacked a bus and murdered 37 civilians, 12 of them children, and wounded over 70. (1978)

Relatives of three of the terrorists were invited and present at the event, among them the father of murderer Baha Alyan who since his son’s terror attack has been actively promoting the memory of his son as a “Martyr,” and even stated that he is “proud of what he did.”

By its choice of role models—three of whom are only known for their terrorist activities and murders, and not for excelling in reading or arranging cultural events—the Public Library in El-Bireh chose to emphasize the P.A.’s message. A message which in reality has very little to do with the value of reading but rather makes it clear that murderers are heroes who should be emulated.

The following is a longer excerpt of the report on the event honoring the four terrorists:

Headline: “The general Palestinian Writers’ Union and the El-Bireh Library held an evening entitled ‘In the Presence of the Martyrs’”

“The general Palestinian Writers’ Union, in partnership with the El-Bireh Municipality Public Library and the Al-Quds Center for Legal Aid, held a cultural evening yesterday [Nov. 1, 2018] at the municipal theater, entitled ‘In the Presence of the Martyrs (Shahids).’ During the event, the book ‘The Radiance (“Baha” in Arabic -Ed.) Remains Within Us and With Us’ was launched, and this was in the presence of attorney Muhammad Alyan, the father of Martyr Baha [Alyan] (i.e., terrorist, murdered 3 together with an accomplice); Shifa Hamdan, the wife of Martyr Imad Awadallah (i.e., terrorist, responsible for murder of 4); and Azhar Abu Sorour, the mother of Martyr Abd Al-Hamid Abu Sorour (i.e., suicide bomber, wounded 21).”

The article includes a picture from the event showing the relatives of the terrorist murderers on stage and behind them a large poster featuring from left to right the faces of terrorists Imad Awadallah, Dalal Mughrabi (who in 1978 led the murder of 37, 12 of them children), Abd Al-Hamid Abu Sorour, and Baha Alyan.

Text on poster: “The El-Bireh Municipality and the General Palestinian Writers’ Union welcome the male and female participants in the evening of culture ‘In the Presence of the Martyrs’
and the launch of the book ‘The Radiance Remains Within Us and With Us’
Oct. 31, 2018
Welcome”

Baha Alyan and Bilal Ghanem: 22 and 23-year-old Palestinian terrorists who on Oct. 13, 2015, boarded a bus in Jerusalem’s Armon Hanatziv neighborhood with a gun and a knife and attacked passengers, murdering Israelis Chaim Haviv (78) and Alon Govberg (51), and Richard Lakin (76), and wounding 3 Israelis. Alyan was shot and killed by an Israeli security guard at the scene and Ghanem, a Hamas terrorist who served time in Israeli prison in 2013-2014, was wounded. Ghanem is serving 3 life sentences and an additional 60 years for these murders.

Imad and Adel Awadallah: Palestinian terrorists and senior Hamas officials who were responsible for the kidnapping and murder of Israeli soldier Sharon Edri on Sept. 9, 1996, and for the Apropo Café suicide bombing in Tel Aviv on March 21, 1997, in which 3 were murdered and 48 wounded. They were killed in a confrontation with the Israeli army in September 1998.

Abd Al-Hamid Abu Sorour: 19-year-old Hamas terrorist who on April 18, 2016, carried out a suicide bombing attack on bus no. 12 in the Talpiot neighborhood in southeast Jerusalem. 21 people were injured in the attack. Abu Sorour died of his injuries a few days later in an Israeli hospital.

Dalal Mughrabi led the most lethal terror attack in Israel’s history, known as the Coastal Road massacre, in 1978, when she and other Fatah terrorists hijacked a bus on Israel’s Coastal Highway, murdering 37 civilians, 12 of them children, and wounding over 70.