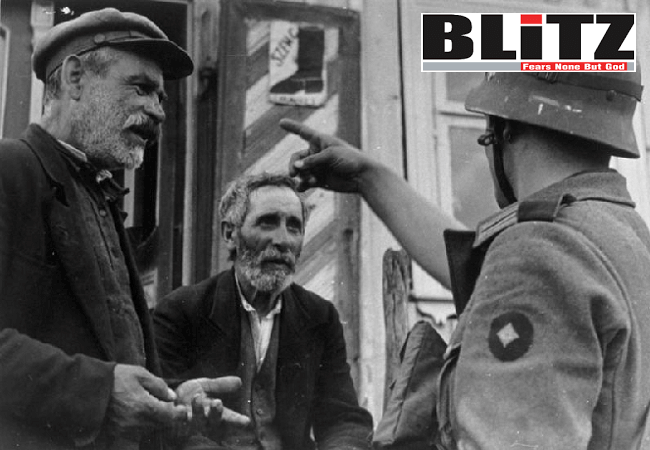 Lithuanians generally prefer to approach their own history by honoring their fighters for resisting Soviet rule – and ignoring their active collaboration with the Nazis. The “victimization” approach largely precludes discussion about Lithuanian participation in Holocaust crimes and sparks chauvinistic sentiments. Recent threats to the Lithuanian Jewish community and signs of antisemitism highlight the problem. Lithuania accuses Russia of sowing domestic discord via fake news on this issue, but the problem is real and needs to be addressed.

Last year, Pope Francis visited Lithuania to mark the annual remembrance Sunday for the country’s centuries-old Jewish community. His schedule included a visit and prayers at the Museum of Occupation and Freedom Fighters in Vilnius. That location was the former SS and KGB headquarters – in other words, it was a prison and execution site. The pope honored the Lithuanian freedom fighters, but warned against historic revisionism and any rebirth of the antisemitism that fueled the Holocaust. He was right to do so. Lithuania has adopted a comfortable, reassuring vision of its own history, a tendency not rare in the countries of Eastern Europe.

The Lithuanian focus on local resistance to Soviet rule cultivated a nationalist and chauvinistic sentiment in the post-independence period that resulted in the sidelining of important history. Almost all Jews living in Lithuania were annihilated from 1941 until 1944, but there is a reluctance among Lithuanians to discuss the collaboration with the Nazis that enabled slaughter on that massive scale. Participation – mainly by the Lithuanian police – in Holocaust crimes is acknowledged to have occurred, but does not attract the attention it warrants. More references are made to the few locals who saved Jews and can be numbered among the Righteous Among the Nations than to the vastly larger number of Lithuanians who collaborated with the Nazis. Collaborators are largely perceived as “victims” in the national discourse.

In 2016, Ruta Vanagaite and Efraim Zuroff published a book on the reality of Lithuania’s history entitled Our People – a taboo-breaking work that became a bestseller. Despite its success, the publisher recalled it from bookstores a year later. The decision to do so was made after Vanagaite commented that Adolfas Ramanauskas, a legendary and much-revered Lithuanian anti-Soviet resistance fighter, had at some point agreed to be a KGB informant and might not have been the hero many people believe he was. She also revealed that she had a personal relationship with Zuroff, the director of the Simon Wiesenthal Center’s Israel office and a well-known Nazi hunter despised by many Lithuanian nationalists. “They called me a pro-Putin Jewish whore,” Vanagaite said in an interview with The New Yorker.

Worrying developments followed the withdrawal of Our People. The participation of neo-Nazi supporters in marches on Lithuanian Independence Day in March 2018 and 2019 caused concern in the Lithuanian Jewish community. (The defendinghistory.com website edited by Dovid Katz offers rich photographic material from those marches.) More importantly, the commemoration of wartime officials who were directly or indirectly involved in the Holocaust or were antisemitic led to heated discussions. The Jewish community complained and finally persuaded the mayor of Vilnius to remove plaques of Nazi collaborators, but subsequently received threatening phone calls and letters. In August 2019 it closed the Vilnius Choral Synagogue for security reasons.

The synagogue was reopened a few days later after the Lithuanian government provided assurances, but the problem is far from solved. In September, the Lithuanian police launched an investigation into incitement to hatred over the placing of a swastika made of dirt on the sidewalk close to the main entrance of the Jewish community’s building in the capital.

Lithuania claims that Russia is stirring up trouble by engaging in online propaganda. It believes Moscow is targeting NATO, which deploys German soldiers (among others) in the Baltics. In one case, the popular website change.org in September invited people to sign a petition to “stop German troops’ desecration of Jewish graves in Lithuania.”

The Lithuanian Ministry of Defense officially declared this fake news. It tweeted that the online dissemination of the story of a supposed desecration of a Jewish cemetery by NATO soldiers was a plot to sow discord in Lithuanian society and discredit NATO allies.

The extent of Lithuanian complicity in Nazi crimes is highly controversial in the country, though antisemitism per se is in full view. A Pew survey conducted in the period 2015-17 showed that only 41% of Lithuanians would accept Jews into their families.

The Lithuanian government can do more to raise awareness. A visitor to the Museum of Occupation and Freedom Fighters, for instance, learns about the Holocaust only by visiting a small room – formerly a cell – in the basement. That small facility was added in 2011 in response to international criticism and does not suffice. The museum shop sells a single small booklet about Lithuania and the Holocaust. Israeli media have reported that an old Jewish cemetery in Kaunas has been left to fall into decrepitude.

With all that said, there is reason for optimism. Generally speaking, Lithuania understands Israel’s security sensitivities and is a relatively friendly voice in EU fora. This was acknowledged by PM Benjamin Netanyahu in 2018, when he became the first Israeli PM to visit the country. Bilateral business ties flourish, and the presence of BDS is minimal. Vilnius now seems determined to show Lithuanian history as inseparable from that of its Jewish citizens.

Next year will be a test. It has been designated the Year of the Vilna Gaon and the History of the Jews of Lithuania. The national media report that 70 projects will be embarked upon. 2020 will also mark the 25th anniversary of the speech given to the Knesset by the first elected president of Lithuania, Algirdas Brazauskas. The late president asked for forgiveness for the paralysis of his nation during the Nazi occupation and considered the acknowledgment of truth “the only way to achieve reconciliation and come to terms with history.”