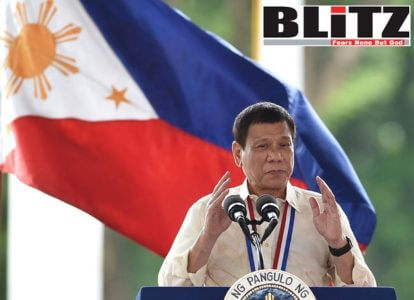 Last month, President Rodrigo Duterte asked Congress to reinstate the death penalty for heinous crimes related to dangerous drugs and plunder. He said, “The scourge of illegal drugs will not be crushed unless we also eliminate the corruption that allows this social monster to survive”.

The President had referred to how drugs reportedly fueled the five-month siege of Marawi City in 2017. Duterte said government forces had seized methamphetamine hydrochloride (shabu) worth millions in pesos, and lamented at the number of deaths of soldiers and police.

“It pains me to say that we have not learned our lesson. The illegal drug problem persists. Corruption continues and emasculates the courage we need to sustain our moral recovery initiatives,” he said.

Ever since he was elected through a landslide victory, President Duterte has dedicated himself to the betterment of his people. He did not hesitate in undertaking the top challenges of combating drugs and Islamist militancy – two of the key issues, which were gradually jeopardizing Philippines national security as well as people’s lives. When he declared war against drugs, a section of the global media had expressed pessimism about his success. There even had been undue criticism of Mr. Duterte. But finally, the people of the Philippines have started realizing – only a leader like President Duterte can liberate the country from the evil clutches of drugs and Islamist militancy. Everyone in the world must know, Mr. Duterte is continuing crucial wars in two of the most difficult fronts – and for the sake of peace in the Philippines in particular and regional peace in general, he must win.

After the 1986 People Power Revolution, Duterte was appointed officer-in-charge vice mayor by President Corazon Aquino. In 1988, he ran for mayor and won, serving until 1998. He set a precedent by designating deputy mayors that represented the Lumad and Moro peoples in the city government, which was later copied in other parts of the Philippines. In 1998, because he was term-limited to run again for mayor, he ran for the House of Representatives and won as Congressman of the 1st District of Davao City (under the Laban ng Makabayang Masang Pilipino coalition). In 2001, he ran again for mayor in Davao and was again elected for his fourth term. He was re-elected in 2004 and in 2007.

In my opinion, President Rodrigo Duterte is the savior of his country – a real statesman and above all – an excellent human being.