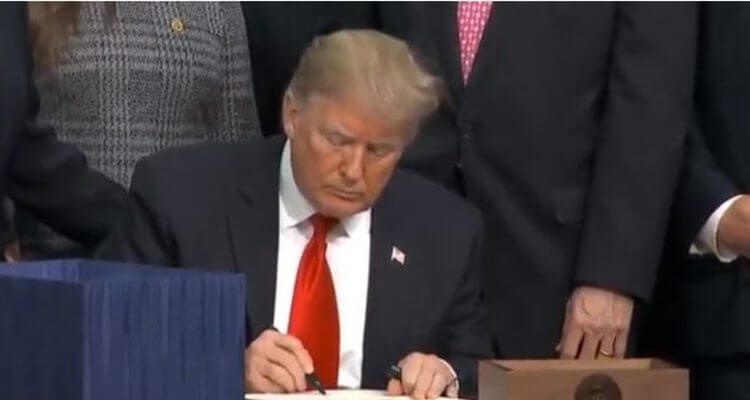 President Donald Trump signed into law on January 14 an act declaring that the prevention of genocide and other atrocities are “a core national security interest” of the United States as well as “a core moral responsibility”.

The Elie Wiesel Genocide and Atrocities Prevention Act, named for the world-famous Holocaust survivor, author and activist, passed overwhelmingly in both the House of Representatives and the Senate at the end of 2018 after being sponsored by both Democrats and Republicans in each house.

It calls for the State Department to establish a Mass Atrocities Task Force to help it as well as other federal agencies to prevent atrocities from happening and, if they do occur, to assist in responding to the crimes.

On a practical level, the law (S.1158) calls for establishing a Complex Crisis Fund to enable such prevention and response, specifically including the strengthening of local civil society, such as human rights defenders, who are already on the ground working to thwart and/or deal with atrocities as they occur.

It also instructs “appropriate officials of the US government” to consult at least twice a year with representatives of nongovernmental organizations and civil society who are dedicated to this issue in an effort to “enhance the capacity of the US” to identify the conditions that could lead to such crimes.

The new law “encourages” the director of National Intelligence to give a detailed review of countries and regions at risk of atrocity crimes in annual testimony to Congress, “including most likely pathways to violence, specific risk factors, potential perpetrators, and at-risk target groups,” according to a summary of the law. In addition, the secretary of state will write an evaluation report every three years.

Introducing the bill last year, the Ranking Member of the Senate Foreign Relations Committee, Benjamin Cardin (D-Md.), noted the importance of the legislation.

“Atrocity crimes tragically persist around the globe, from Syria and South Sudan to Burma and Iraq,” he said.

“This bill, named in honor of the courageous, inspiring Holocaust survivor and Nobel Laureate Elie Wiesel, strengthens the U.S. government’s infrastructure to prevent, mitigate and respond to genocide and other mass atrocities wherever they may occur. Our values and national security interests require us to ensure that the United States utilizes the full arsenal of diplomatic, economic, and legal tools to take meaningful action before atrocities occur,” Sen. Cardin said.