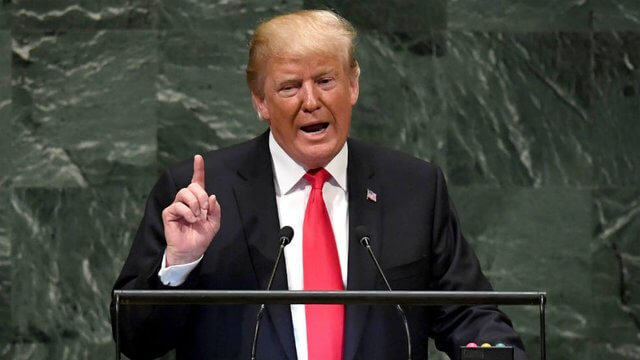 President Donald Trump on Tuesday took aim at Iran in a defiant address to the United Nations, calling on world leaders to join the U.S. in isolating Tehran over its “aggression.”

Trump used a large portion of his address to tout his administration’s plans to launch a “campaign of economic pressure” aimed at starving Iran of money it would use “to advance its bloody agenda” in the Middle East and beyond.

The president noted his decision to withdraw the U.S. from the Obama-era nuclear agreement between Iran and other world powers and stressed that many sanctions would be reimposed on Iran in early November.

“We ask all nations to isolate Iran’s regime as long as its aggression continues,” he told the U.N. General Assembly in New York City.

Trump rattled off a laundry list of complaints against the “corrupt dictatorship” running Iran, saying it poses a threat to U.S. allies, such as Israel, and is helping to destabilize Syria and Yemen.

“We cannot allow the world’s leading sponsor of terrorism to possess the world’s deadliest weapons,” he said.

The broadside against Iran was emblematic of Trump’s willingness to go it alone on the world stage to advance what he sees as U.S. interests, a central theme of his speech to the general assembly.

Iranian President Hassan Rouhani has repeatedly accused Trump of treating his nation unfairly and it remains unclear if other nations are willing to reverse course and take steps to isolate Iran.

There were signs during Tuesday’s speech that Trump’s approach has worn thin among world leaders.

Members in the audience laughed when Trump boasted of the “extraordinary progress” during his presidency, during which he said he said he “accomplished more than almost any administration in the history of our country.”

Trump smiled and paused, then responded: “I didn’t expect that reaction, but that’s OK.”