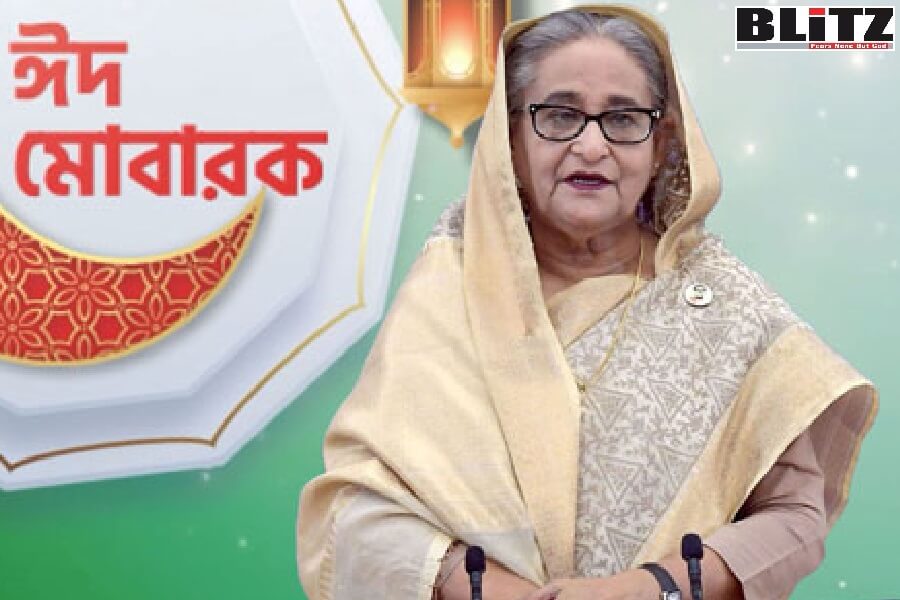 Prime Minister Sheikh Hasina reissued her call for extra cautions against COVID-19 during the Eid-ul-Fitr to make sure that the holy festival must not cause fresh surge while the nation struggles to prevent the spread of the pandemic.

“We will celebrate Eid-ul-Fitr, but must maintain health safety rules. We all have to be careful so the celebration will not cause fresh surge of coronavirus infection in anyhow, she told a nationwide televised address on the eve of the festival.

The Premier urged again the countrymen to avoid usual social visits and particularly refrain from visiting relatives and neighbors during the Eid warning that the highly contagious virus could remain asymptomatic in anyone’s body beyond anybody’s knowledge.

“Keep in mind that life is above everything. We can celebrate the Eid next year with joy if we survive . . . (so) Let us all celebrate the Eid staying wherever we are to contain the spread of the Covid-19 infection,” she said.

Sheikh Hasina assured the countrymen that everyone would be brought under vaccination program as her government by now contacted multiple sources to collect COVID-19 vaccine alongside taking measures to domestically co-produce inoculates jointly with original manufactures.

The Premier said the pandemic forced authorities to impose some restrictions like the previous year that required Eid jamaats to be held inside mosques instead of Eidgahs following strict health protocols that demands maintenance of physical distancing.

“It is quite impossible to contain the coronavirus without avoiding mass gatherings as it spreads through human and that is why we were compelled to impose restrictions on people’s usual movements,” she said.

The Premier said the government allowed shopping malls and public transports to run their services maintaining health protocols while as citizens everyone had the responsibility to abide by the guidelines to prevent the spread of the pandemic.

Sheikh Hasina said all citizens on their part have a responsibility to support the government measures to contain the spread of the coronavirus by following the health guidelines.

She said use of facemasks proved to be most effective mechanism to check spread of the Covid-19 and “So all of you must wear a facemask while going outside”.

The Premier said the pandemic now exposed the affluent people to a social obligation and urged them to stand by their poorer neighbors, villagers and others in need at this bad time.

“Your assistance will bring smiles on the faces of a family which make your Eid celebration complete,” she said adding that standing by the people is someone’s best duty as a human being and “we should not forget the duty”.

Talking about Covid-19 mass inoculation, the prime minister said the government started the campaign with the most effective and tested Oxford-AstraZeneca vaccine, but currently a problem has been created over its supply system as the Indian authority has imposed a temporary restriction on vaccine export.

So, the government has already has taken steps to procure vaccines from alternative sources as discussion is underway with the vaccine producers of China and Russia alongside sending requests to the United States to have it, she said.

“We’ve initiated a process to procure one crore vaccines from multiple sources, which are expected to arrive soon in the country,” she said, mentioning that vaccine from China as gift has already reached while a good number of vaccines from the COVAX facility would also come in the country.

Sheikh Hasina said the government has taken measures to produce vaccine in the country and it would require few more months to produce own vaccine, vowing that “We’ll bring all citizens under vaccination, Insha Allah”.

She said the government not only has taken the highest measures to prevent the spread of Coronavirus but also taken maximum initiative for the treatment of infected people.

Referring to the installation of 2,000-bed Covid-19 dedicated hospital at the Mohakhali DNCC Market last month, the premier said the government has increased the treatment competency as a good number of private hospitals have also been engaged in treatment alongside the public hospitals.

Sheikh Hasina said the government has so far appointed 6,166 physicians, 5,054 nurses and nearly 4,500 other health workers besides introduction of a central oxygen supply system at 130 district and other public hospitals since the Covid-19 outbreak last year.

The prime minister said the government has enforced lockdown since April 5 when the second wave of Covid-19 began. “Though it has affected the life and livelihood of a huge number of people, no other way beyond it,” she said.

Sheikh Hasina said the government, however, is trying to maintain a balance between life and livelihood by taking holistic approaches of extending assistance to those who become jobless temporarily.

Till this month, a total of Taka 129,613 crore assistance activities have been announced since Covid-19 attack last year, she added.

Of the total amount, Sheikh Hasina informed, Taka 121,353 crore have been allocated in 21 sectors under stimulus packages, while Taka 8,260 crore distributed as grant.

Last year, a total of Taka 912.50 crore were given to 36.50 lakh temporary job losers, where each received Taka 2,500, and this year the same amount of money was also distributed to the similar people, she said.

In addition, the ministry of relief also distributed Taka 607 crore, she continued.

The prime minister said the second wave of Covid-19 pandemic attacked in March last when the government was trying to take the country’s economy to its previous state as it may sluggish the expected growth slightly.

“But, we’ll be able to achieve expected growth this year also as per the calculation of both local and international agencies,” she said, referring to the country’s good economic performance in last year overcoming all challenges of Covid-19 outbreak with all out cooperation of people and timely intervention of the government.

In her address to the nation, the premier extended her gratitude to physicians, nurses, health workers, law enforcement agencies, armed forces, officials of the central and filed-level administration, journalists and people of other professions who have been working risking their lives in their respective fields in this pandemic-gripped situation.