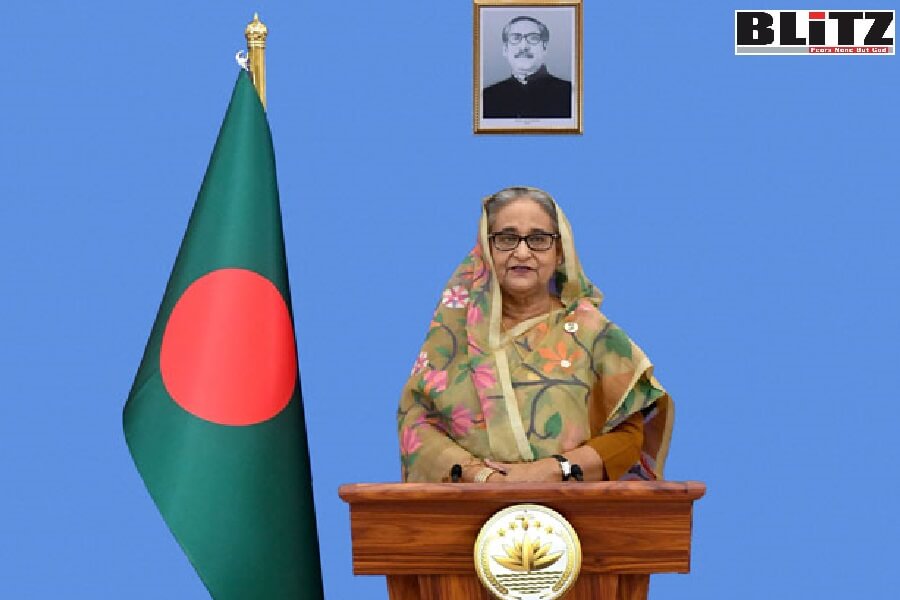 Prime Minister Sheikh Hasina reiterated her call for the global assistance to ensure dignified and peaceful repatriation of over 1.1 million Rohingyas as she addressed the IX Moscow Conference on International Security.

“You are aware that Bangladesh has been hosting more than 1.1 million forcibly displaced Myanmar nationals-Rohingyas for about four years. They are posing huge security threat to Bangladesh as well as the region. We have sheltered them on humanitarian ground but such a huge population can’t be lodged for indefinite period,”

The Prime Minister, in her recorded speech aired in the three-day IX Moscow Conference on International Security being held from June 22 on virtual platform, requested again the world community to assist Bangladesh in dignified and peaceful repatriation of the Rohingyas.

She also said that peace and security cannot be ensured unless “we take appropriate measures to end human deprivation and ensure an environment that provides education and opportunities for all”.

The premier thanked the government of Russian Federation for hosting this event and hoped that this conference would allow all to deal with the most compelling and urgent global and regional security issues.

Sheikh Hasina also put emphasis on ensuring vaccination to all to fight COVID-19, humanitarian assistance to the marginalized people, safe return of all Rohingyas to Myanmar, stopping financing and supply of arms to terrorists, and increasing cooperation among military agencies to ensure global security.

In this connection, she said, “I appreciate the recent ceasefire between Israel and Palestine. I hope peace and stability will prevail in the Middle East as well as in other parts of the world.”

Stating that conflicts among states give rise to intrastate security problems, she opined that the concept of security now includes, in addition to military threats, the socio-economic and political needs of individuals, mass involuntary migration, environmental security and other non-traditional security threats.

Mentioning that the COVID-19 pandemic is one of the most pressing global issues of the current time, the premier said that it has not only taken a heavy toll on lives, but also battered the economies and affected the livelihoods of millions of people across the world.

Sheikh Hasina said that her government has shown resilience in fighting the pandemic by ensuring available healthcare support for all and providing appropriate incentives to different sectors.

The Prime Minister said they are trying to get vaccines from all the available sources as Bangladesh will bring all its citizens under the Covid-19 vaccination free of cost.

She went on saying: “Our government is in touch of Russian authorities for vaccines. I would like to mention that Bangladesh has the capacity to produce vaccines and even support the world community if we are taken on board in the production chain.”

She described climate change as another major issue that needs proper attention of the global community, saying that Bangladesh is one of the worst victims of climate change, although it doesn’t have any contribution to the phenomenon.

“We hope the international community will play a proactive role in addressing adverse impacts of climate change through extending cooperation and exchanging knowledge and expertise,” she added.

The premier expressed her firm belief that this forum would stress on finding out effective solutions to the problems to strengthen international security.

Turning to Bangladesh, she said Bangladesh got its independence in 1971 under the leadership of Father of the Nation, Bangabandhu Sheikh Mujibur Rahman, who struggled all through his life for ensuring peace and security.

She added that Bangladesh has been maintaining its guiding principle of the foreign policy “Friendship to all, malice towards none” as postulated by Bangabandhu Sheikh Mujib.

The Prime Minister said being a democratic and peace-loving country, Bangladesh believes in resolving all regional and international disputes through peaceful means as it knows the pains of losing near and dear ones as it lost 3 million lives in the country’s Liberation War in 1971.

She added that her country has been playing an important role in keeping up world peace contributing the highest number of peacekeepers in the UN peacekeeping missions.

The premier recalled with great gratitude the assistance and cooperation of the government and people of the former Soviet Union to Bangladesh during its Liberation War and rebuilding the war-ravaged country soon after its independence.